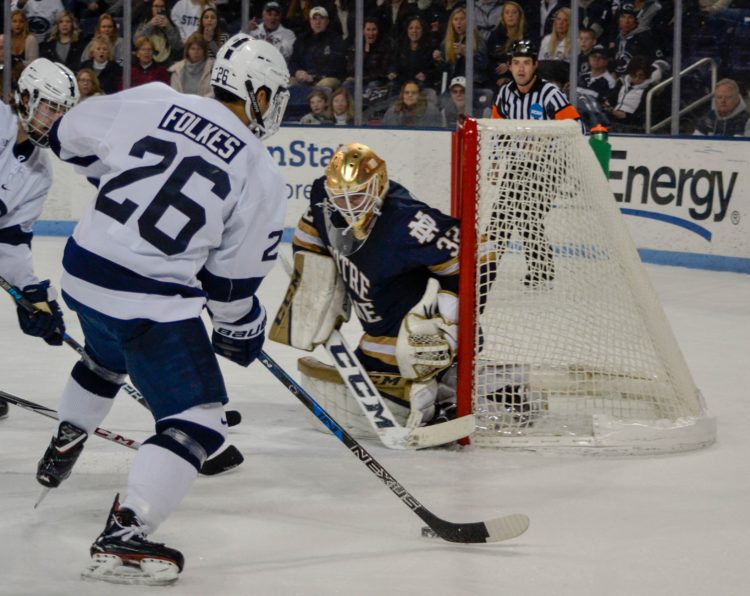 Since their creations in 2013, the Big 10 and the National Collegiate Hockey Conference have been the most talked about conferences in the sport. The Big 10 for their controversial origin and the NCHC for their dominance. Penn State joining Division 1 Men’s Hockey and triggering the Big 10’s creation broke up the WCHA and CCHA, completely changing the dynamic of the sport. Meanwhile, the NCHC found a collection of hockey hotbeds and created a juggernaut. Every year since forming, an NCHC team has reached the Frozen Four and each of the last two National Champions have been NCHC schools. On Saturday night, the National Championship game will feature representatives from the most interesting conferences college hockey has to offer. It also offers two teams seeking redemption for last year.

Minnesota-Duluth takes the NCHC banner into Saturday night and looks to claim the program’s second National Championship this decade. The Bulldogs won the Conference tournament last year and reached the National Championship game before falling to Denver 3-2. Duluth graduated six players from last year’s team and lost Neal Pionk and goalie Hunter Miska to the pros. Scott Sandelin brought in five freshmen on the blue line and gave Hunter Sheppard the starting job in goal. With all the changes, the Bulldogs struggled against the NCHC, sitting near the bottom around Christmas time. A sweep of Omaha before the break and a victory in the Ledyard Bank Classic at Dartmouth righted the ship.

The Bulldogs’ run appeared to end at the NCHC Frozen Faceoff when they lost to both Denver and North Dakota in St. Paul. On the bus ride home to Duluth, the Bulldogs watched the scoreboard and rejoiced when Notre Dame beat Ohio State, getting Duluth into the tournament by .001 points in the pairwise. They capitalized with narrow wins over Minnesota State-Mankato, Air Force, and Ohio State in the NCAA Tournament.

Duluth’s greatest strength might be the preseason’s biggest question mark: the talented defensive corps. Duluth skated five freshmen on the blue line and all played well. Louie Roehl and Matt Anderson combined for a goal against Ohio State on Thursday night and Scott Perunovich led the team in scoring. Perunovich was also the fourth leading scorer on the blue line in the nation and second in the NCHC. Nick Wolff is the oldest player, and while only being sophomore, he does carry himself as a veteran. The 6′-4″ Eagan, MN, native can hit and pass the puck. The Duluth blue line is young, but deep and incredibly talented.

The forwards are no slouch either. There is no true superstar scorer, but Riley Tufte, Joey Anderson, and Peter Krieger form a fearsome top line that can score important goals and check the opponent’s top scorers. They did an excellent job slowing down Ohio State’s top line of Freddy Gerard, Mason Jobst, and Tanner Laczynski. Seniors Karson Kuhlman and Jared Thomas lend a stabilizing veteran air and skill to the forward lines. They’ve been through enough battles in their careers. The only questions are regarding Tufte and Krieger. Both sustained injuries in the Ohio State game and had to leave the ice for a time. They finished the game and will play against Notre Dame, but it is a question.

Goaltending is not much of a question for Duluth. Hunter Shepard earned the job early in the year and owned the job. The sophomore from Cohasset, MN, recorded the nation’s 10th best save percentage (.924) and 8th best GAA(1.95). The only question to ask is how he will fare against serious pressure. Shepard has not faced 35 shots or more since playing North Dakota in the NCHC Consolation Game, and the Bulldogs lost that game. He only made 19 saves against Mankato, 11 saves against Air Force, and 19 saves against Ohio State. He will almost certainly face some more pressure against Notre Dame. He is talented enough to win the game for Duluth, but he likely will have to face more pressure than he has all tournament.

Representing the Big 10 is the conference’s newest member, the Notre Dame Fighting Irish. Jeff Jackson’s squad played in Hockey East for four years after the CCHA dissolved. In their final Hockey East season, the Irish upset Minnesota and UMass Lowell en-route to the Frozen Four, where they were promptly steamrolled by the Denver Pioneers. In their first season as a Big 10 team, the Irish dominated. They won the Regular Season title by a giant margin and won the Conference Tournament in a series of nail-biters. The close games continued against Michigan Tech, Providence, and Michigan in the NCAA Tournament. Their last six games, including every postseason game, have been decided by one goal. The last five Irish games have either been decided in overtime or the final 30 seconds. Notre Dame is a battle-tested unit.

The face of the team is Mike Richter award winner Cale Morris. The sophomore netminder replaced last year’s captain, Cal Petersen, with flying colors, leading the nation in save percentage (.944), making almost 100 more saves than any other goalie this year, and notching the nation’s 8th best GAA. He inspires confidence in his team that only the best goaltenders can. The Larkspur, CO, native notched 41 saves vs Ohio State in the Big 10 Title Game, 36 vs Michigan Tech, and 28 vs Michigan in the NCAA Tournament. He only stopped 19 vs Providence, but he only allowed one to go through. He will need to be on point to get the Irish a win.

The defensive corps in front of Morris is older and more experienced than Duluth’s. The Bulldog’s top defensemen are more talented, but the Irish have plenty of two-way skill. Dennis Gilbert and Andrew Peeke have size and speed to skate with most forwards and Jordan Gross has great skating skill and a deadly long-range shot. He scored two goals against Michigan Tech, including the overtime winner, and got two assists against Michigan on Thursday night. They do allow more shots than Duluth does and will have to tighten their neutral zone play on Saturday.

Up front, Notre Dame is similar to Duluth in that there is no true superstar scorer. There is plenty of balance and more potency on the Irish side. Jake Evans is the nation’s 14th leading scorer and the highest scorer playing on Saturday night. He landed two goals against Michigan and is a prime candidate for MVP of the Tournament if the Irish win. Cam Morrison, Dylan Malmquist, Andrew Oglevie, and Cal Burke have all been through plenty of wars and have the skill needed to test the Duluth defensemen.

There is one final factor to consider: the crowd. The Xcel Energy Center is only two hours away from Duluth and the hockey-mad fans will turn out in force. South Bend, Indiana, is eight hours driving from St. Paul. The Irish will have a sizable contingent in the stands but the crowd will favor Duluth.

All things considered, this should be a close game. Both teams are famous for playing one-goal games and both are driven to wash the bad taste from last year away. Duluth has the stronger defensive corps, but Notre Dame has the nation’s best goaltender. Both teams can score and both units can dish out big hits. This should be added to the list of classic National Championship games. It’s a toss-up, but by the slimmest of margins, I think Notre Dame will come up with the win for their first National Championship.