When the Frozen Four got underway, the Denver Pioneers were pegged as overwhelming favorites. They have been first or second in the polls almost all season and are out to validate their greatness with the program’s eighth NCAA championship. They faced the Notre Dame Fighting Irish, an underdog team playing near their home and no one expecting them to win. Unfortunately for the Irish, Denver was on a mission to wash the bad taste of last year’s Frozen Four loss to North Dakota out of their mouth and Notre Dame was turned into road kill.

The game opened with a flurry of Denver shots on Notre Dame goalie and captain Cal Petersen. He faced many shots well, but his team could not get a shot for the first five minutes of play and only got three shots on goal for the first 20 minutes. Meanwhile, Denver was out to continue their dominance in the NCAA Tournament. Before the halfway point of the first period, Emil Romig found himself in the right circle and he buried a shot to take the lead. Six minutes later, Hobey Hat Trick Candidate Will Butcher drove the puck around the net and got it on Henrik Borgstrom’s stick for a 2-0 lead that Denver took into the intermission. 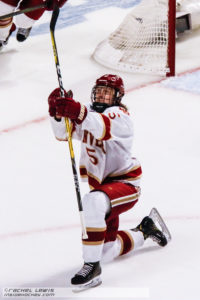 At the start of the second period, Andrew Oglevie, Anders Bjork, and Dennis Gilbert led a push for the Irish to try and get on the scoreboard. If they could get a goal, they could cut into the lead and make Denver sweat. The goal never came. Denver’s blue line pressure was exquisite all night and the fore checking was even better. Notre Dame could rarely break through the line for a shot. Denver was more fortunate on the offensive end.

At the 14:05 mark, Tariq Hammond got a breakaway shot by Petersen to put Denver up 3-0. 2:20 later, Dylan Gambrell got a wraparound shot by Petersen to make it 4-0. Finally, only 1:51 later, Evan Ritt got in on the fun with a pass from Colin Staub on an Irish turnover. Denver took a 5-0 lead into the second break.

The third period saw Notre Dame pressure Jaillet more, but it was too little too late. The Irish drew an interference call from Michael Davies and got a goal from Cam Morrison five seconds after the call. Unfortunately, they could not get another goal. Denver did. Dylan Gambrell got his second goal of the night in the waning minutes of the Illinois evening to get the Pioneers their final 6-1 margin of victory.

Notre Dame ends an up and down season with the most painful down they could have possibly imagined. They were struggling in early December before finishing within a point of winning the Hockey East Regular Season Title. They dominated Providence in the opening round then got embarrassed at the Boston Garden by Lowell in the Semi-Finals. They upset both Minnesota and Lowell in comeback fashion, but ended with a crushing loss to the Pioneers.

Thursday’s game was the last time the Irish will wear the Hockey East logo on their sweaters. Head Coach Jeff Jackson praised his unit for growing tremendously throughout the season, especially his large junior class. Notre Dame is one of the younger teams in the sport, with only two seniors. Back-up goalie Chad Katunar and forward Ben Ostlie are graduating from South Bend in May. The rest of the team is primed for a big development and should be the favorites when they begin Big10 play in the fall.

Denver continues their dominating season and is right where they want to be, in the National Championship game. Head coach Jim Montgomery and captain Will Butcher admitted that the team is focused on winning the title after losing bitterly to North Dakota last year. They were subdued after beating the Irish, only exchanging hugs and “good jobs”. Their goal remains the program’s eighth NCAA Title. Montgomery explained that this has been the most dominating hockey his team has played all season and it might be hard to continue that on Saturday night. The Pioneers have outscored opponents 8-0 in the first period of the NCAA Tournament so far. They will have a harder test on Saturday night when they face NCHC rival Minnesota Duluth for the National Championship. Puck drops at the United Center at 7pm CT.