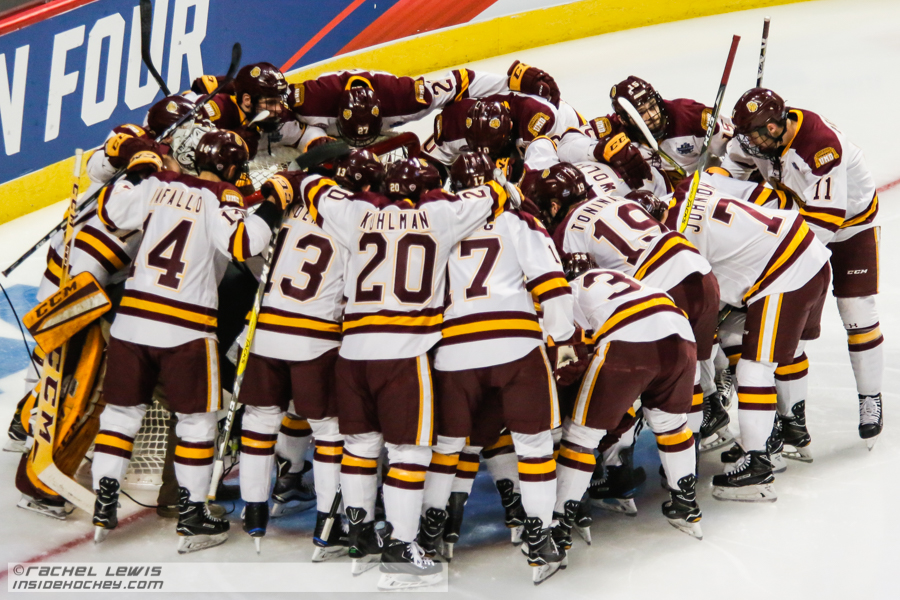 UMD huddles before the start of the game.

The second half of the college hockey season is underway, as is tournament season. With the World Juniors in full force, the Minnesota-Duluth Bulldogs entered their tournament without five of their mainstays.

Still, the Bulldogs skated into the Ledyard Bank Classic in Hanover, NH looking to win a trophy. The first game of the tournament was a battle of Bulldogs, with Ivy League staple Yale matching up. Even without many regulars, Duluth had the talent to take an easy victory.

The first period was furious, physical, and harshly contested. Yale won the shot total 10-6, but could not get a puck behind sophomore goaltender Hunter Shepard.

Duluth took a pound of flesh from the Yale skaters but did not get many good looks on net in the early stages. When they got some looks, Sam Tucker stopped the shots. Duluth kept up their attack and cracked Yale.

The second period started poorly for Yale and the game got out of hand. Brett Jewel took a tripping penalty 2:37 into the stanza and Duluth captain Karson Kuhlman scored on the ensuing power play.

Near the halfway point of the period, Duluth got another chance on the advantage when Anthony Walsh was called for kneeing. Blake Young netted the third power-play goal of the afternoon and UMD took a 3-0 lead into the final frame.

Yale was gifted some chances in the final stanza, but poor shot selection and timely goaltending stopped any opportunities. 6:30 into the frame, Nick McCormack was called for a five minute major for contact to the head and a disqualification.

Yale passed out of many shots and Shepard made 9 of his 29 saves in the final frame. After Yale failed to pot a goal on the long power play, Duluth notched two final goals.

Jared Thomas had a breakaway and beat Tucker for the fourth goal of the game. Blake Young rounded out the scoring with his second goal of the game, potting a wraparound. Yale outshot Duluth 29-24, but UMD came away with a 5-0 victory.

The Duluth win was not without consequence. McCormack’s disqualification comes with an automatic suspension. That means he is ineligible for Saturday’s championship game against host Dartmouth.

Head Coach Scott Sandelin was furious about the call, as his team is already down three defensemen to the World Juniors. Now they’re down four. Still, the Bulldog record climbs to 9-9-2 and they will take on Dartmouth College for the Ledyard Bank Classic Championship on Saturday night.