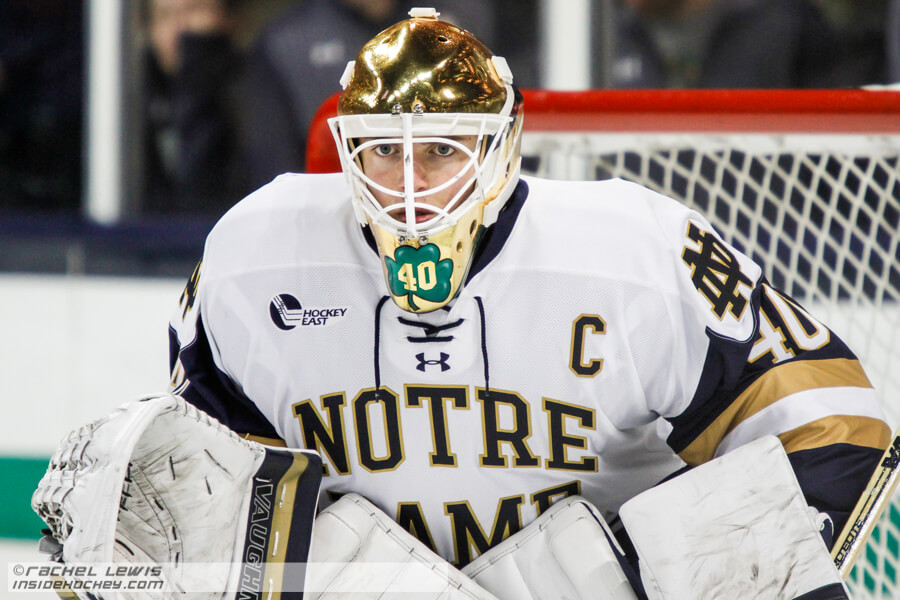 Notre Dame Comes Back On Minnesota

With a chance for a banner in front of the Minnesota Golden Gophers and the Fighting Irish of Notre Dame, the soon to be Big 10 opponents took to the ice in Manchester. What followed was an entertaining game complete with penalties, a comeback, and a goalie pull in the final seconds.

Minnesota got off to a good start, finding Connor Reilly with a chance to take his own rebound and score on Notre Dame’s captain and goaltender, Cal Petersen. After the opening score, the Golden Gophers kept up the pressure on Petersen, but he stood strong, keeping his team in the game while his offense scrambled to find a rhythm.

The Irish eventually got some shots away, but Minnesota outshot the Irish 14-9 for the first twenty minutes of the game.

Minnesota got one last chance at the end of the period when Dawson Cook was called for a boarding penalty with 35 seconds left in the period. The Gophers would not score; taking a 1-0 lead into the intermission. They would have the power play to start the second period, though.

When the teams went back to the ice, Minnesota took to the offense and scored on the advantage only 30 seconds into the frame. With a 2-0 lead, the play went dry for a while. The teams skated around and threw the puck toward the net, but the play quieted down. Little happened of major importance for a few minutes.

Then the complexion changed completely when Notre Dame’s offense got into gear. Andrew Oglevie took a pass from Petersen into the attacking zone and got the puck by Eric Shierhorn in Minnesota’s net. Fifty-four seconds later, Notre Dame moved the puck perfectly to get the puck by Shierhorn again, this time off Anders Bjork’s stick. The game went into the intermission with some life and tied 2-2.

Upon starting the third period the life and hits were still there if the shots weren’t. Both teams skated hard and fought for a lead, but couldn’t get it. Towards the midway point of the period, Notre Dame got their chance. Ryan Collins was called for a cross-checking penalty. 1:02 into the power play, Notre Dame got Anders Bjork the puck and he netted his second goal of the game to put the Irish ahead.

Minnesota still had time and a fighting chance, but they could not get the equalizer. They made Notre Dame work, with a power play and a late goalie pull. But Notre Dame withstood the attack and punched their ticket to the Regional Final on Sunday afternoon.

With the loss, Minnesota finishes with a record of 23-12-3. Six seniors will leave the program when Vinni Lettieri, Connor Reilly, Jake Bischoff, Mitch Rogge, Justin Kloos, and Taylor Cammarata don their caps and gowns in May.

Notre Dame moves on to the Regional Final on Sunday for a rematch with UMass Lowell, the team that ended their run in the Hockey East Tournament.