The winds howled on Madison Avenue as the Frozen Four got underway on the west side of Chicago. The Harvard University Crimson and the Minnesota Duluth Bulldogs faced off to start the final weekend of the college hockey season. They staged a classic game that saw Duluth pull out another postseason victory and sent Harvard to the end of their season.

The game got going with a healthy dose of hits and shots to let the fans at the United Center know that this would be a tight affair the whole way. The teams traded punches early followed by power plays. There were four power plays in the opening period and the first three saw shots, but Hunter Miska and Merrick Madsen made their saves and stopped any scoring.

At the 14:25 mark of the first period, UMD’s Kyle Osterberg was called for boarding and Harvard had their third power play in the period. They rarely miss when given that many chances. Harvard moved the puck well, found Tyler Moy in the left circle, and he gave Harvard the 1-0 lead with five minutes left in the first. Duluth did not go quietly into the intermission. With 1:36 left in the period, Duluth won a faceoff, got the puck to Joey Anderson in the slot, and the freshman tied the game going into the first break. 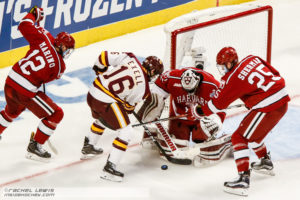 The second period was closely contested, but no goals were scored. Miska and Madsen stared each other down and did not blink. Madsen made 13 of his 36 saves in the second while Miska made 10 of his 39 in the frame. Luke Esposito skated exceptionally well for Harvard and Neal Pionk led the Bulldogs in the frame. And both teams had a power play and failed to score. At the second intermission, the score was stuck on 1-1.

The third period was played cleanly and desperately. The teams wanted a spot in the Championship game on Saturday night and played like it. Harvard picked up their intensity and had a chance to take the lead. With 5:41 gone in the third period, John Marino fired a shot on Miska that was saved. Tyler Moy followed up the initial play with another shot and the puck found its way into the net. However, the officials ruled that Miska had control of it for a second and disallowed the goal. They would review the call and maintain the call. Duluth had dodged a bullet but still needed a score to win the game. In the final minute, they finally beat Madsen.

Duluth kept the puck in the attacking zone, got the puck to Alex Iafallo on Harvard’s doorstep, and he put it between Madsen’s legs for the 2-1 lead with 26 seconds left to go. Harvard had one final chance. They pulled Madsen for an extra skater, won the faceoff, and forced Duluth into icing. With the offensive possession, Harvard peppered Miska for one last assault on the Bulldogs and the program’s fourth Championship game appearances. Unfortunately, Esposito had the best shot and he rung the crossbar. Duluth cleared the puck and survived a 2-1 thriller.

For Harvard, the loss may well have been the most painful defeat in their long history. They were in the middle of a historic season and had legitimate championship aspirations. Senior captains Devin Tringale and Alexander Kerfoot were emotional talking about the loss and how sudden it was. They took a moment to show their pride in the school and talk about the development of the program from a doormat to a national contender.

The Crimson had a historic season this year. They won their first Beanpot since 1993, the 10th ECAC championship, their first NCAA Tournament game since 1994, and made their first Frozen Four since 1994. They established themselves as one of the best programs in the country. Head Coach Ted Donato expressed his pride in his team after the loss, especially his seniors. Clay Anderson, Luke Esposito, Sean Malone, Tyler Moy, Phil Zielonka, and captains Tringale and Kerfoot played their last game as Harvard students tonight.

Minnesota Duluth will play in the Bulldog’s third NCAA championship game and will look to win the program’s second championship. They won their first national crown in 2011 in St. Paul. Head Coach Scott Sandelin led them there before, and he will look to cap his team’s outstanding season with a win in the Windy City.

END_OF_DOCUMENT_TOKEN_TO_BE_REPLACED

UND Hockey: What Happened to Them?

Thirteen games into the 2022-23 season, the University of North Dakota men’s hockey team isn’t meeting expectations. After winning a third National Collegiate Hockey Conference regular season title in a row, the Fighting Hawks have fallen on hard times. Through 13...