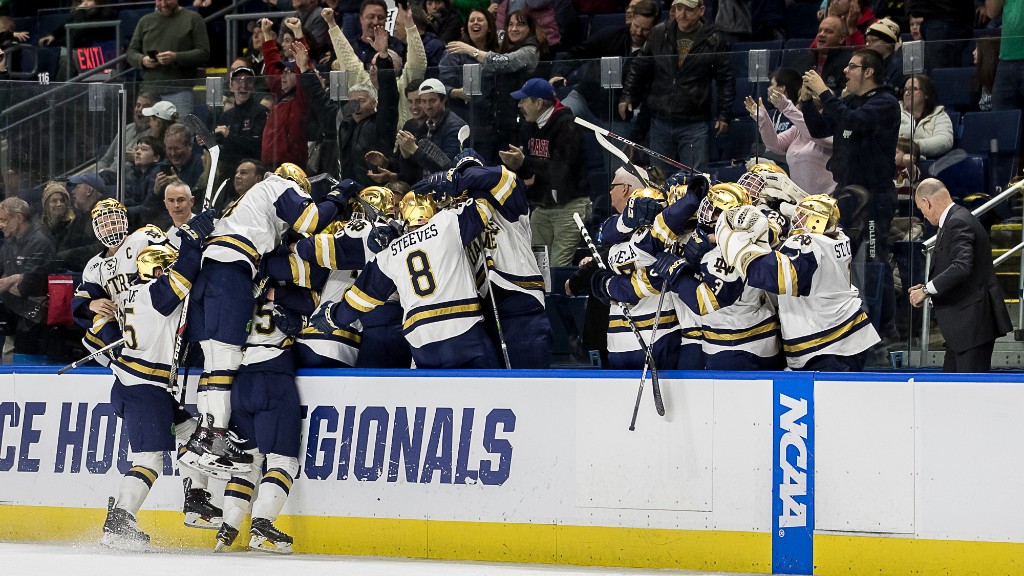 Bridgeport, CT — Last year, the Notre Dame Fighting Irish reached the Frozen Four for the first time in six years. In their game on College Hockey’s biggest stage, the Irish were bulldozed by the eventual champion Denver Pioneers. Since then, the Irish have been on a mission to return to the Frozen Four and wash the bad taste out of their mouths. The transitioned from Hockey East to the Big 10 perfectly. They won the conference’s regular season and postseason championship in style. Their performance earned a top seed in the NCAA Regional Tournament in Bridgeport, CT. The Irish survived a war with Michigan Tech, then had to live through another round of playoff hockey against old Hockey East opponent Providence College.

The game started poorly for Notre Dame. As against Clarkson, Providence got the first score. Only 2:02 into the game, Tommy Davis wrapped the puck around the net and threw it on Cale Morris. The Irish netminder stopped the puck, but Kasper Bjorkqvist cleaned up the mess to give Providence the 1-0 lead. The rest of the period was messy. Each team took two minors and slowed the game down. Notre Dame won the shot battle 10-5, but failed to capitalize on their power plays and trailed 1-0 after one period.

The Irish controlled most of the second period, outshooting the Friars 11-7. For most of the frame, Providence netminder Hayden Hawkey held firm and kept the Irish at bay. Late in the period, luck came the Irish way. Ryan Tait was whistled for a goaltender interference minor. On the ensuing power play, Notre Dame rushed the net and tied the game when Andrew Oglevie tracked down a loose puck and fired a snapshot from the slot by Hawkey with 1:51 left in the frame. Notre Dame tried to claim the lead in the final seconds of the frame but ran into Hawkey and the buzzer.

Both teams entertained the crowd in the third period. Hawkey and Morris stared down the pressure and stopped shots. The game appeared destined for an overtime session. But, in the final minute of regulation, Notre Dame cracked the code of Providence’s five on five defense. The Irish cycled the puck through the left side of the offensive end. Andrew Ogelvie got the puck to Cal Burke along the end boards. Burke found Dylan Malmquist in front and the junior from Edina, MN, gave Notre Dame a 2-1 lead with 27 seconds left in the game. Providence pulled Hawkey for an extra skater, but could not get a shot on net to tie the game late. Notre Dame wrapped up a 2-1 victory and their second consecutive Frozen Four appearance.

Providence was crestfallen after the game but held their heads high, especially Head Coach Nate Leaman. “It’s hard to score in college hockey. Notre Dame’s one of the best defensive teams in the country. It’s hard to get goals and victories in this sport. I’m proud of our guys and how we fought.”

The Friars season ends with a 24-12-4 record. They finished third in the Hockey East standings and played in their first Conference Championship game since 2001. They also won their first NCAA Tournament game since 2015. They almost rode a young team with defensive ability to a Frozen Four bid. Six seniors depart the team after this year. Jake Beaton, Tommy Davis, Truman Reed, Robbie Hennessey, Alex Cromwell, and Captain Brian Pinho all graduate with the program’s first National Championship as their chief accomplishment. The Friars are young and will return most of their players for another title run next season.

Notre Dame was elated but still focused after the game. Dylan Malmquist scored the game-winner and will play in his home state for the Frozen Four, but he didn’t think much of it.

“It’s nice to play at home, but it was more important to score and get us there. This is a tight-knit group and to be able to win this was an incredible feeling.”

Head Coach Jeff Jackson was pleased with his team’s performance.

“These guys find a way to win regardless of the situation. Everything I have to say is about how great these guys are.” Notre Dame extends their record to 27-9-2. The Irish will play in the program’s fourth Frozen Four. They will play either Boston University or Michigan in St. Paul on April 5th.