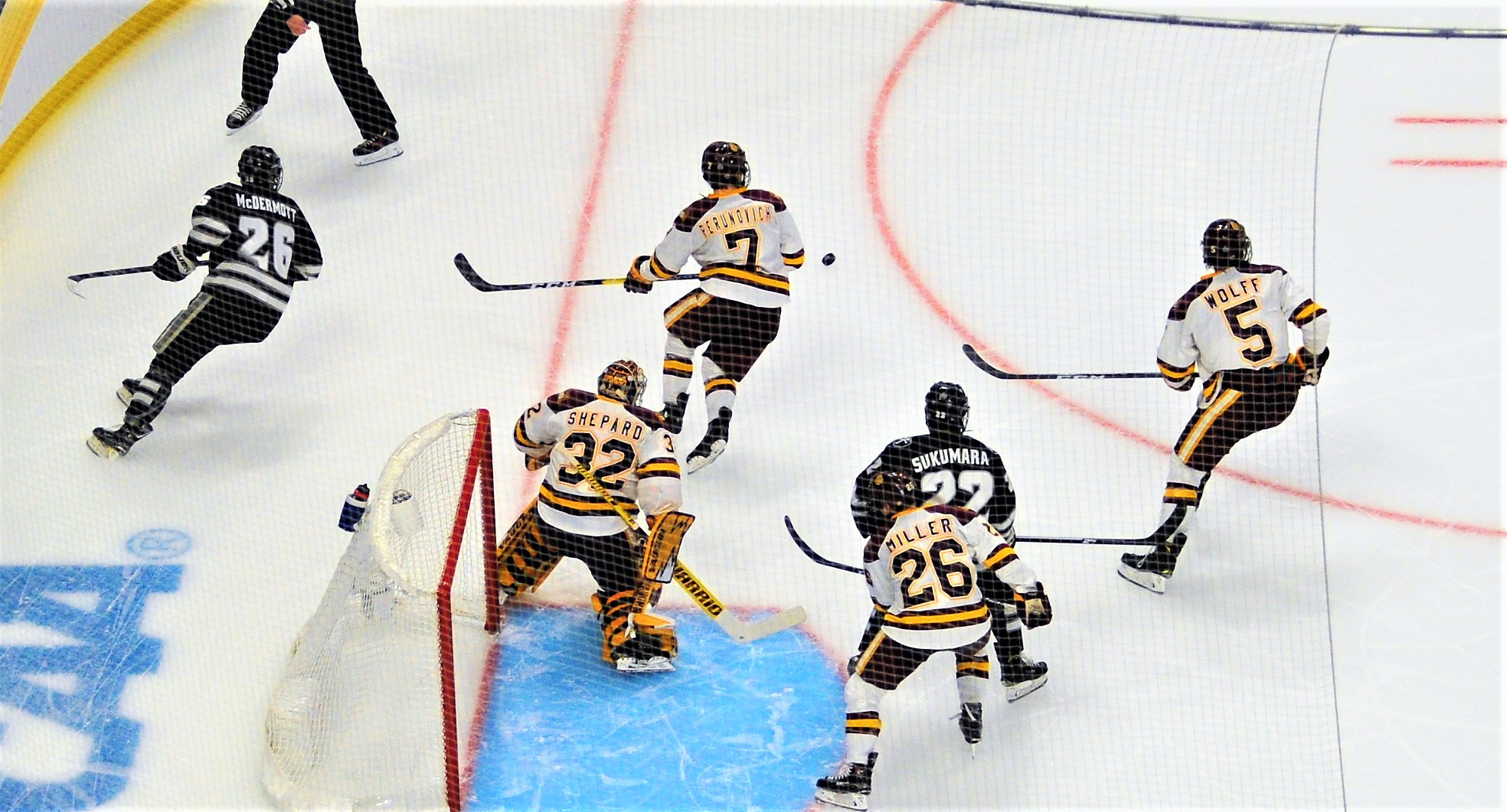 Scott Perunovich pursues the puck in the Frozen a Four against Providence. Credit- Chris Lynch, Inside Hockey

Minnesota Duluth dominated the college hockey landscape between the 2016-17 and the 2019-20 seasons. In that time, the Bulldogs claimed two NCHC Tournament Championships, appeared in three National Championship games, and claimed two National Crowns. Only the Denver Pioneers in 2017 and Coronavirus in 2020 stopped the Bulldogs in their tracks.

Still, UMD pulled in some impressive hardware for the season that wasn’t. On Saturday night, as part of ESPN’s SportsCenter broadcast, junior defenseman Scott Perunovich claimed the Hobey Baker Award. John Buccigross, the Frozen Four play-by-play voice since 2013, made the announcement.

Across three seasons, Perunovich played in 115 games for the Bulldogs, posting 20 goals and 85 assists for 105 career points. His junior season was the most productive, with 6 goals and 34 assists for 40 points in 34 games. He finished tied for 10th on the national scoring list among skaters and second among defensemen, trailing only Boston University’s David Farrance. The Hibbing, Minnesota, native finished 2nd in assists nationally, behind only Providence’s Jack Dugan, and tied Dugan for most power play points. The two were also joined by Dugan’s college teammate Michael Callahan and Sacred Heart’s Mike Lee for most power play assists nationally.

UMD was to play Miami (OH) in a best 2 of 3 NCHC quarterfinal series at Amsoil Arena before the Coronavirus cancelations.

In eight NCAA Tournament games, Perunovich’s Bulldogs were unbeaten. Scotty P recorded only two points in those eight games, but they were both critical. He assisted on Nick Wolf’s goal against Air Force in the 2018 Regional Final in Sioux Falls that served as the game winner in a 2-1 victory that send the Bulldogs to the Frozen Four. The next year, he got the primary assist on Peter Krieger’s goal against Quinnipiac that started the scoring in a 3-1 W that sent UMD to Buffalo. He never scored a Frozen Four point, but was the face of the nation’s best defensive unit. He, Nick Wolff, Dylan Samberg, Mikey and Matt Anderson, and Louie Roehl combined to keep Norte Dame from recording a single shot on net for the final 4:57 of the 2018 National Championship game against Norte Dame. That same unit held 2019 Hobey Baker Winner Cale Makar and the UMass Minutemen to only 18 shots on net for the entire 2019 National Championship game. For his efforts, Perunovich was voted to the Frozen Four’s All Tournament team both times he played there.

Perunovich was voted First-Team All-American all three years of his collegiate career, the 12th player to accomplish that mark and the first to do it since Harvard’s Adam Fox.

Minnesota-Duluth now boasts six different Hobey Baker Winners, the most in the 40 season history of the award. Perunovich is the first Bulldog recipient since Jack Connolly won it in 2012.

This is the 9th time a defenseman has won the Hobey and third time in the last four seasons the award has gone to a defender. Denver’s Will Butcher (2017) and UMass’s Cale Makar (2019) were the previous two defensive recipients.

In contrast to the Hobey, the Mike Richter Award is much younger. The award has only been handed out since 2014. Named in honor of former Wisconsin Badger and New York Ranger Mike Richter, the award is given to the nation’s best goaltender. In the same ESPN SportsCenter telecast, Maine’s Jeremy Swayman took home the 2020 Richter Award.

Unlike his Hobey counterpart, Swayman didn’t have as much postseason success. In fact, Swayman never took part in so much as a Hockey East semi-final game across three years in Orono. Yet, his impact was clearly felt. The Anchorage, Alaska, native recorded a career .924 save percentage in 94 career collegiate games. His record was 44-37-11 in that time.

The goaltender was named the Mike Richter winner and to the All-American First Team East!

The 2019-20 season was his best. As a junior, Swayman recorded a .939 save percentage, tied with Michigan’s Strauss Mann for second nationally, only trailing Minnesota State’s Dryden McKay. No college goaltender faced more shots (1170) or made more stops (1099) than Swayman. Behind their star, Maine boasted an 18-11-5 record, the best since the 2012 edition that lost the Hockey East Title game to Boston College and appeared in the NCAA Tournament. The Black Bears went 13-1-3 at Alfond Arena, only surpassed by Minnesota State, Cornell, and North Dakota in home-ice winning percentage this season.

Maine was slated to play the Connecticut Huskies in the Hockey East Quarterfinals in Alfond before the Covid-induced cancelations.

Maine’s premier player was drafted by the Boston Bruins in the 4th Round of the 2017 NHL Draft (111th overall). Swayman signed his Entry Level Contract with the Bruins on March 17th.

All three Hat Trick members were also selected to the ACHA’s First Team All American. The other All-American Players are listed below.

Cornell’s Mike Schafer and North Dakota’s Brad Berry shared the Penrose Award as the Nation’s best coach. Schafer led Cornell to an 23-2-4 record, the ECAC Regular Season Championship, the best winning percentage in College Hockey and the only unbeaten record at home (11-0-2 at Lynch Rink). He is the second Big Red recipient of the award and first since Ned Harkness claimed the award in 1968. Brad Berry led the Fighting Hawks to a 26-5-4 record, good enough for the second most wins in the nation and the NCHC Regular Season Championship. This is the fourth time a North Dakota Head Coach claimed the Penrose, tied for the most with New Hampshire, Denver, Clarkson, Boston College, and Boston University. Dean Blais was the last UND Penrose recipient, claiming the trophy twice (1997 and 2001).