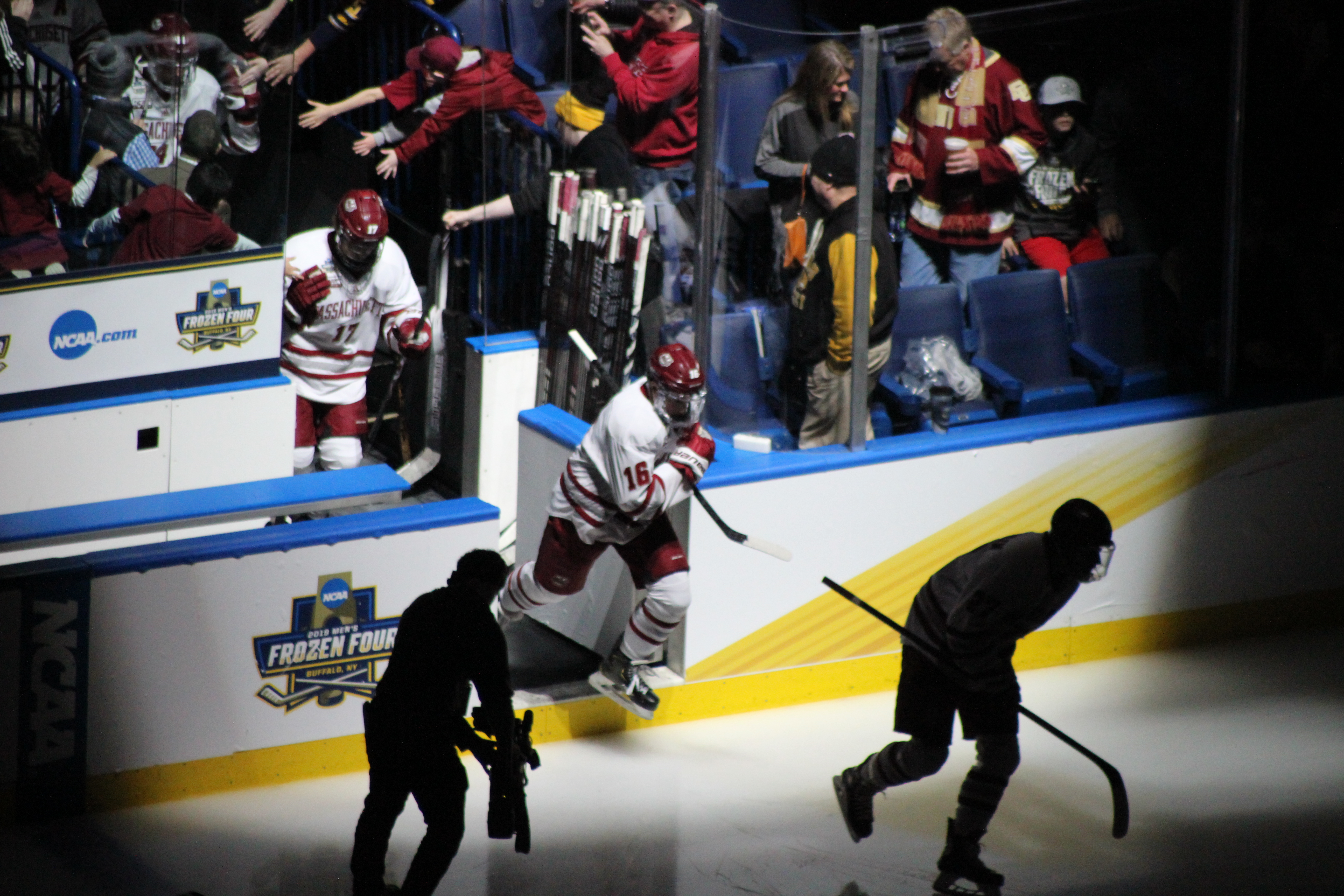 But leading the way all season was UMass sophomore, Cale Makar. The defender ended the 2017-2018 season with a flourish against Vermont and decided to return to Amherst to bring the program another step forward and improve his game. Namely, to get stronger playing college hockey. On Friday night, at Buffalo’s Harbor Center, Makar capped a spectacular individual season by claiming the Hobey Baker Award.

It is incredible that Makar went to UMass in the first place. The Calgary, Alberta, native and star for the Brooks Bandits was recruited by the prior coaching staff, led by John Micheletto, and stayed committed to the program through the transition from Micheletto to Greg Carvel. “I saw the players they were bringing in and I felt they were going in the right direction. I wanted to go to a school where I’d get a chance to get myself in the lineup every night and mature in every aspect of the game. Even with the coaching change, I just stuck it out and I feel I made the right decision.”

Amazingly, through all the chaos, decommitting was never a thought Makar pursued seriously. Any potential fears brought up were wiped away when Makar met his new Head Coach. “I got a call from him the day he got the job. That was pretty special.”

Carvel’s experience coaching in the NHL, including mentoring a young Erik Karlsson with the Ottawa Senators, and the holistic approach offered by the UMass staff convinced Makar he was making the correct decision by remaining a member of the Massachusetts program. Makar’s father, Gary Makar, had many years ago given his son “Hockey Tough” by Saul Miller, which shaped his thinking on the sport from an early age. He fit in perfectly with a school that embraced shorter but more high energy practices, sports psychologists, and other more progressive aspects of the hockey world.

Makar performed beautifully in his freshman season. He skated in 34 games, scored 21 points on 5 goals and 16 assists. His signature play came in the first Hockey East playoff game at the Mullins Center in 11 years against Vermont. Makar started in his own end shortly after a kerfuffle made the game 4on4. UVM’s defenders were rendered helpless as Makar drove and roofed a puck on Hockey East All-Star Stefanos Lekkas. UMass ultimately won the game and the series in three games for their first playoff advancement in 11 years. He was tabbed as Hockey East’s Rookie of the Year in 2018 and earned a spot on Hockey East’s All-Star Third Team. He also split the New England Hockey Writers’ George C. Carens Award as New England’s Rookie of the Year with Northeastern goaltender and 2019 Mike Richter Award winner Cayden Primeau.

Makar’s return to Amherst made the Minutemen respected, but his performance lifted the team to dazzling new heights including the first Number One rank in the program’s history in early December. Ultimately, Makar’s performance amidst a stacked blue line of Mario Ferraro (whom Makar has frequently referred to as the most high-energy guy he’s played with and a leader of the team), Ty Farmer, and D-partner Marc Del Gaizo helped UMass author one of college hockey’s most remarkable stories. Ahead of the National Championship game, UMass has 31 wins, the program’s first Hockey East Regular Season Championship, and a spot in the Frozen Four for the first time.

Individually, Makar led Hockey East in scoring, the first defenseman to reach that mark in over 20 years, with 16 goals and 33 assists for 49 points in 40 games played. He finished tied for third with fellow Hobey Hat Trick Nominee Adam Fox in scoring nationally. Makar was awarded Hockey East’s Player of the Year Award and earned a spot on the AHCA’s East First Team All-American unit.

The Hobey Baker Committee awarded Makar the 39th edition of the trophy as the finale of the Awards unveiling for the Richter, All-American Teams, and Hockey Humanitarian Award. The ceremony was held at the HarborCenter, connected to the KeyBank Center in downtown Buffalo. The Canisius Golden Griffins play there.

Despite all the attention and the accolades heaped upon him, Makar did not turn the attention to himself. He immediately admitted to his heart beating a thousand times and congratulated the other nominees, then thanked his coaches and family before turning attention back to Saturday night’s National Championship game against Minnesota-Duluth.

Makar is the first Minuteman to claim College Hockey’s greatest individual prize. He is the eighth defenseman to win it and second in the last three years, Denver’s Will Butcher being the other in 2017.