St. Paul, MN — On April 8th, 2017, the Minnesota-Duluth Bulldogs fell just short of a National Championship against NCHC rival Denver in Chicago. Duluth lost much of their defensive corps and their goaltender and looked to regress with the young players getting big ice time. After rallying for a tournament spot, the Bulldogs slipped up against Denver and then North Dakota in the NCHC Frozen Faceoff. On the bus ride home from St. Paul, the Bulldogs watched the Conference Championship games to see how the Pairwise rankings worked out. When Notre Dame defeated Ohio State for the Big 10 Championship, the Bulldogs snuck into the NCAA Tournament as the final at-large team. Three weeks after sneaking in and 364 days after Chicago, the Bulldogs showed their maturity seeking the program’s second National Championship against the team that helped them in, the Notre Dame Fighting Irish.

Duluth beat Notre Dame to the boards to open the period but lost momentum on a game-changing injury. Justin Wade hit Kobe Roth into the boards and Roth went to the ice. Play stopped and the Duluth training staff helped him off the ice. Scott Sandelin decided to have captain Karson Kuhlman fill Roth’s role on the fourth line while also skating on the 2nd line. After a failed Notre Dame shift, Kuhlman’s energy paid off. He picked Jordan Gross’s pocket and fired a shot by Notre Dame netminder Cale Moris for a 1-0 Duluth lead 9:06 in. The Bulldogs kept the pressure on, outshooting the Irish 10-7 for the frame. The pressure worked. Kuhlman won a battle along the boards and Jared Thomas moved to make a play. He fired a puck on Morris from the left goal line-extended that snuck through for a 2-0 lead with only 1:21 left in the period.

The momentum continued to open the second. Notre Dame committed a penalty late in the first and another early in the second. Duluth peppered Morris on the power plays, but could not get the third goal. Momentum swung when Scott Perunovich sat for interference. Notre Dame’s picture perfect passing on the power play resulted in Andrew Oglevie tipping in a goal with 12:20 of the second to go and Notre Dame on the comeback trail. Duluth stonewalled the Irish for the remainder of the frame and outshot them 18-8. Morris continued to stand on his head and kept the score 2-1 entering the final frame.

Notre Dame’s modus operandi in the NCAA Tournament was pulling off dramatic comeback victories and breaking hearts. The Irish entered the third period trying to tie the game late. Duluth never gave them a chance. The five Duluth freshmen blueliners and sole sophomore combined for a neutral zone clinic. Notre Dame never had the space to create speed or aggressive play to create offense. Duluth outshot Notre Dame 7-5 and pressured Cale Morris more than Notre Dame ever pressured Hunter Shepard. Duluth kept Notre Dame out of the attacking zone and did not allow a shot on Shepard for the final six minutes of the game. Duluth’s defense held as Jake Evans won a faceoff into empty Notre Dame offensive ice and the clock struck zero. Duluth closed out the program’s second National Championship with their third consecutive 2-1 victory. 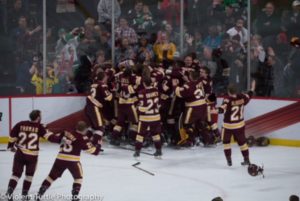 The All-Tournament Team included Forwards Karson Kuhlman, Jared Thomas, and Andrew Oglevie, Defensemen Scott Perunovich and Jordan Gross, and Goaltender Hunter Shepard. Duluth’s Karson Kuhlman was selected as the Most Outstanding Player. The Bulldog’s captain recorded a goal and two assists for the tournament, including a goal and an assist on over 30 minutes of ice time in the Championship game.

The Fighting Irish conclude their season with a 28-10-2 record. They won the Big 10 Conference Regular Season and Postseason Championship in their first season in the conference. Jeff Jackson’s squad rode strong late game performances to the program’s fourth Frozen Four and second National Championship Game. Jackson was disappointed after the program’s second straight loss in the Frozen Four but kept optimistic for his program’s future.

“This group was unbelievable,” Jackson said. “I mean, they were relentless. They were resilient. We had great leadership. I feel awful for our seniors. They did a heck of a job all season long. We still walked away with two trophies and played in the national championship game. So there’s a lot to be said for what they accomplished this year. They had a 16-game winning streak. We had a great year in the Big Ten. We ran into a better team tonight, and we have to respect that. We’ll get started all over again. It’s a continuous cycle for us as coaches. Sometimes it’s different people. But I’m not going to look that far in the future right now. I want to embrace these kids that we have here and what they accomplished.”

Duluth concludes their year with a 25-16-3 record and an unexpected National Championship. Head Coach Scott Sandelin was proud of his team after their greatest triumph.

“Couldn’t be more proud of our team,” Sandelin said. “These guys battled and grew together. This one’s just as special as the first Championship win. I’m just happy for these guys. They get to go out with a win. It’s pretty remarkable what these guys did to win a National Championship.”

Hunter Shepard @shepDadyy throws every photographer a curve ball and bolts the crease for the "jump into the fans" celly as a 2018 National Champion. I like the originality! @UMDMensHockey @NCAAIceHockey @collegehockey @SBNCollegePuck #frozenfour pic.twitter.com/8yeoRjVa44

The Bulldogs won their second National Title of the decade. The only other team to do so this decade is Boston College. The first Bulldog championship was in 2011, also decided at the Xcel Energy Center in St. Paul. Duluth only allowed 20 Notre Dame shots, blocking 21 before Shepard saw it. For his part, Shepard stopped 19 of the 20 Irish shots. Duluth is the third consecutive NCHC team to win the National Championship.

Left winger Blake Young was particularly emotional. A native of Battleford, Saskatchewan, he played with inspiration following the Humboldt tragedy.