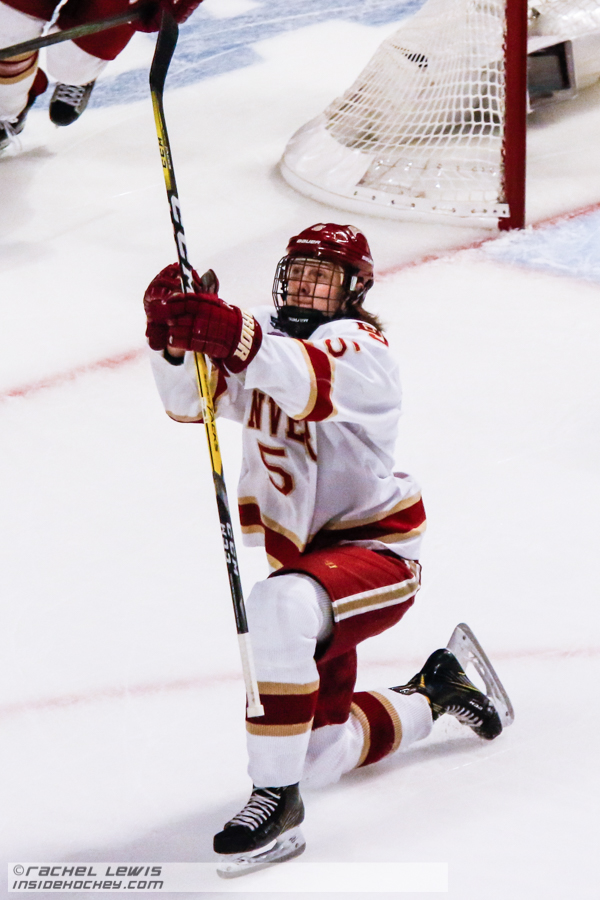 When Penn State announced they would move from club hockey to varsity hockey on Terrence Pegula’s backing in 2010, college hockey underwent a massive upheaval. Longstanding conferences were abandoned and new alliances were built. The biggest winners of the shuffle were the members of the new National Collegiate Hockey Conference. Since beginning play in the 2013-2014 season, the NCHC has been referred to as a super conference, boasting storied programs, intense rivalries, and top tier talent. They have had two representatives in the last two Frozen Fours and founding member North Dakota won last year’s National Championship. This year will see another NCHC team win the National Championship. The Denver Pioneers and the Minnesota-Duluth Bulldogs dueled for the top spot in the conference and have established themselves as the two best teams in the country.

Denver comes in with a 32-7-4 record, sporting the most wins in the country. They won the NCHC regular season championship but fell to the North Dakota Fighting Hawks in the NCHC Frozen Faceoff. They’ve completely dominated the NCAA tournament, outscoring their opponents 8-0 in the first period. They got four goals in the first period against Michigan Tech en-route to a 5-2 victory. They breezed by the cause of conference realignment, Penn State, in the Cincinnati Regional Final 6-3. They played Notre Dame in the Frozen Four last night and took the air out of the Irish with a 6-1 domination.

They sport the best forecheck in the game, only allowing the Irish to shoot 17 times last night and keeping the puck on their sticks while only being called for one penalty in the game. Their defensive unit is the best in the sport with Will Butcher setting the tone. The senior captain is in the Hobey Baker Memorial Award winner and is the first defenseman to win the award since Matt Gilroy in 2009. He’s the best defenseman in the country, able to skate as well as a quick forward, hit as hard as an NHL defender, and get into the action at every turn. He is joined by Adam Plant, Tariq Hammond, Michael Davies among others who make the Pioneer blue line feared.

Backing them up is one of the best goalies in college. Mike Richter Award winner Tanner Jaillet is one of five goalies to have a GAA of under 2, he’s in the top ten for save percentage at .930, and has been in big games in his career. He led the Pioneers to the Frozen Four last season and has the Pioneers in a position to win the eighth National Championship in program history.

They have the offense to make things happen too. Freshman Henrik Borgstrom has infused a physical team with offensive sizzle and skilled puck handling. He and sophomore Troy Terry lead the Pioneers in goals and total scoring, with 22 goals and 43 total points. They also get contributions from Dylan Gambrell, Jarid Lukosevicius, and Emil Romig. They’ve scored five or more goals in every game in this tournament and totaled 42 shots in last night’s game against Notre Dame. They can get contributions from every line. On paper, the Pioneers are the easy favorite tomorrow night. If any team is prepped to beat Denver, it is Minnesota Duluth.

The Bulldogs sport a 28-6-7 record, coming in second in the conference. They topped Western Michigan and North Dakota in the NCHC Tournament to win their first conference title since the WCHA crown in 2009. They’ve shown an affinity for playing in close games with every NCAA Tournament game being decided by one goal. It took overtime to defeat both Ohio State and Boston University in the Fargo Regional. Harvard then took the Bulldogs to the last minute and Duluth got the winning goal in the final 30 seconds of the game. They’ve proven that they can win tight and high-pressure games.

The biggest reason for the big game victories and maybe the biggest surprise of the Bulldog’s season is the performance of freshman goaltender Hunter Miska. Before the season got going, Duluth wasn’t sure of their goalie situation after Kasimir Kaskisuo graduated. Bulldog Coach Scott Sandelin admitted his concerns after the Harvard game and how pleased he has been with Miska this season. He should be. Miska made 39 saves against one of the best offensive teams in college hockey and stared down a Crimson team looking to tie the game with no time on the clock without blinking. He’s beaten North Dakota, Ohio State, BU, and Harvard in the postseason. He’s proven he belongs in the discussion of top goaltender in the country.

Minnesota doesn’t have as dominant a defense as Denver’s but they’re no slouch. Brendan Kotyck and Willie Raskob are strong skaters who can hit and shoot well from the blue line. Their backcheck, while not as commanding as Denver’s, is still excellent and can frustrate anyone in the neutral zone. The younger defensemen, Neil Pionk and Nick Wolf are also strong skaters and bolster a senior-laden defensive corps of Bulldogs.

Duluth has also shown an ability to skate on the forward lines and score. Alex Iafallo, Dominic Toninato, and Joey Anderson form one of the best lines in the country and they’ve got the strength to handle Denver’s pressure. Kyle Osterberg and Adam Johnson have some good speed while Riley Tufte and Avery Petersen give size that many teams don’t have. They can give opponents different looks and play different styles. That versatility will serve them well on Saturday night.

This game will be close. These are conference rivals that draw the best from each other. They last played each other in December and split the meetings at Magness Arena in Denver. The Pioneers won 4-3 on that Friday night and Duluth won 3-1 in the Saturday game. Since then, the teams have taken different paths that have not crossed until now. Duluth has pulled out close and high-pressure games. Denver has established themselves as a favorite.

Both teams are well coached. Sandelin has turned Duluth into a national power and wants the program’s second National Title of the decade. Jim Montgomery was voted coach of the year for his efforts in the Mile High City and has the team on the verge of tying North Dakota for the second most National Championships ever. Both teams will play hard and aggressive.

There is one question to ask about Denver: How will Tanner Jaillet perform when under pressure? His blue line has been so dominant that he has barely been pressured this tournament. His forwards have scored so easily that he has rarely been shot on when the game is close, especially early in the game. He’s faced an average of 18.67 shots in three NCAA tournament games. If Duluth can break the pressure of the Pioneer blue line, Jaillet will face pressure he has not seen in many moons.

Despite that, Denver is still the favorite and I think they will win their eighth National Championship. Duluth will play hard the whole way, but Denver has more depth than anyone else in the country. They have high-level players at every position on the team and play a maddening style of hockey that has bedeviled the best of the NCAA all season. This game will show how great the sport of college hockey is and how great the NCHC is a conference. Puck drops at 7 PM Central time at the United Center.