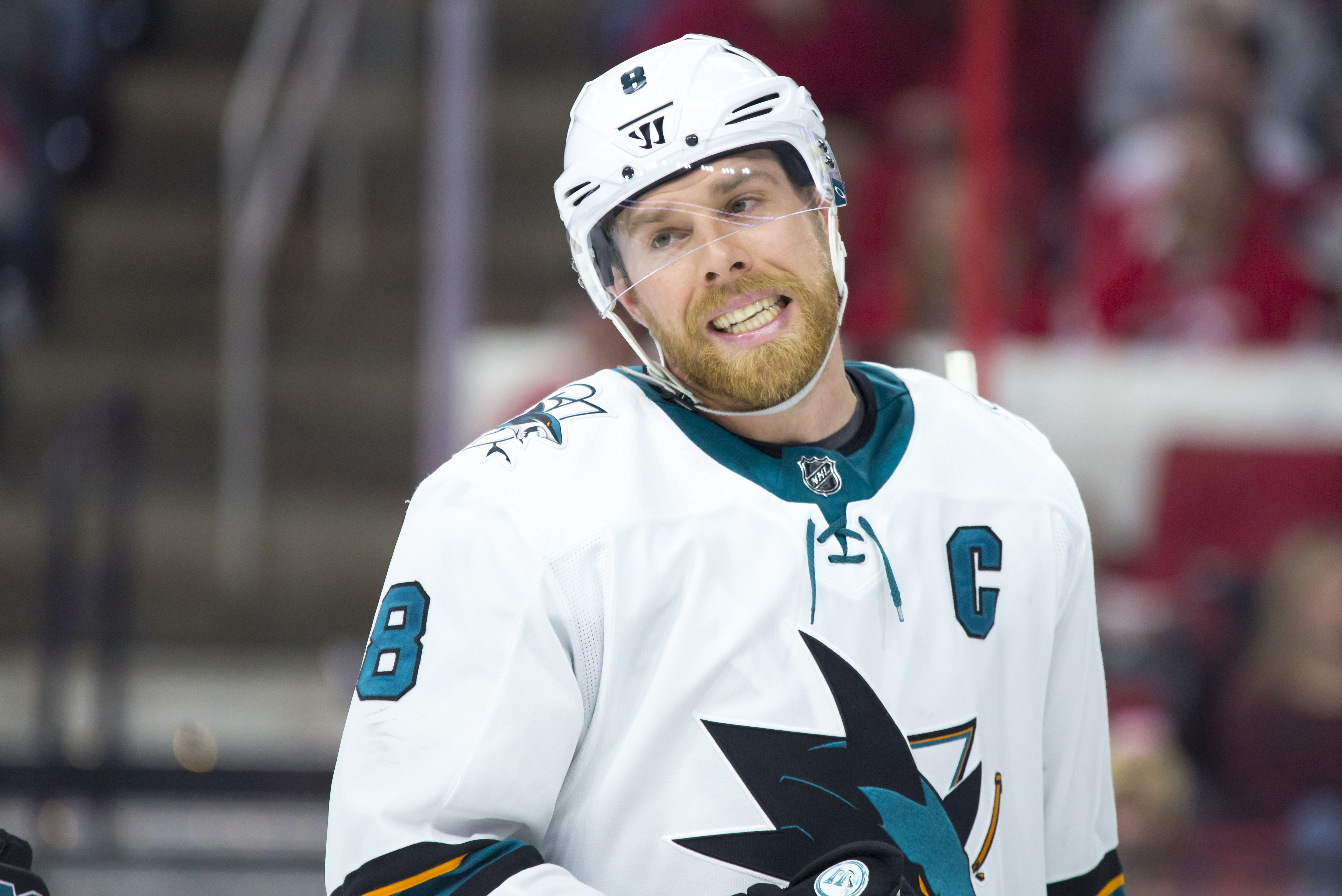 JOE PAVELSKI smiles before lining up for a faceoff during a game between the San Jose Sharks and the Carolina Hurricanes. Raleigh, North Carolina, United States of America. (Credit Image: Spencer Lee/Inside Hockey)

After winning six in a row from Mar. 1 through Mar. 12, the San Jose Sharks have since lost six straight. The winning streak ended with this near buzzer-beating, game-winning goal by captain Joe Pavelski in Winnipeg. That game might as well be 10 years ago. It certainly seems to feel that way for Sharks fans. The Sharks managed their win streak despite not having Erik Karlsson nor Evander Kane. While the latter has returned, the past four games have been played without Joe Pavelski.

Four games is a tiny sample size, but there has been a noticeable difference in the Sharks’ play in their captain’s absence. Unsurprisingly, the Sharks have been pretty much better across the board with Pavelski this season than without him. A handful of crucial stats really jump out when comparing the Sharks’ first 72 games with Pavelski and the past four without him.

In terms of shot-attempt percentages, the Sharks haven’t seen any dip. With Pavelski the Sharks have controlled 56.19% of shot attempts in close situations, without him it has technically increased to 56.32%.

However, when it comes to unblocked-shot attempts, (which most analytics people agree is a more telling stat, because unblocked shots are typically better opportunities) the Sharks have actually seen a stark contrast without Pavelski. With Pavelski in the lineup, the Sharks are No. 1 in the NHL with a 55.51 percentage in unblocked-shot attempts. Without him they rank just ninth in the league at 52.08 percent.

Again, super sample size in his absence, but the Sharks were averaging 3.58 goals per game with Pavelski. Without him they have averaged just 2.5. Now it is easy to shake one’s head at the mere fact that it is only four games. There is far too much random variation in such a tiny sample. I mean Erik Karlsson has been out too. Certainly the Sharks would be playing better if Karlsson were in the lineup while Pavelski were out.

This is where one has to use their eye test in conjunction with some data. The Sharks have won 50.7-percent of their faceoffs this season with Pavelski in the lineup, good enough for 11th in the league. It’s only an above-average percentage, yet the Sharks are the best team in terms of possession. That tells us that the analytics people are accurate when they tell us that faceoffs don’t have a huge effect on overall possession.

That said, faceoffs do carry importance though in more micro situations. Pavelski plays on the power play and as a right-handed shot, he takes the faceoffs in the right circle. He is the only right-handed center on the roster. That is important to note. In his vacated role, left-handed guys who hardly ever take power-play faceoffs on that side are having to take them. In the games without Pavelski, the power play has clicked at just 18.8-percent, 19th in the league in that span. With him, the man advantage was clicking at 24.1-percent, 6th in the league. It’s no surprise that the Sharks’ faceoff percentage without Pavelski has fallen to 44.6.

Not only have the Sharks struggled winning draws with Pavelski on the power play, but the zone entries have also been poor. For whatever reason, the Sharks have abandoned their successful neutral-zone drop pass that many teams have utilized this season. When in the lineup, Pavelski has always been the player receiving the Brent Bruns drop pass and initiating the zone entry. Without him, the Sharks have primarily done away with the drop pass instead of utilizing someone else to receive the dish. Receiving the drop pass and skating through the neutral doesn’t seem like something the other skill guys would have trouble with, but thus far only Pavelski has been tasked with that play.

Everyone who follows the NHL on even a semi-regular basis knows that Pavelski is the best tipper in the league. With compete level, hand-eye coordination and hockey sense that are all off the charts, Pavelski has been able to maintain his status as an elite producer into his mid-30s when others have fallen off. And right now, the Sharks are witnessing just how much they would miss him if they can’t re-sign him this offseason.

Pavelski is in the final year of his contract that pays him $6 million per year. For a player of his caliber, that deal is an absolute bargain. As noted here at Inside Hockey recently, the Sharks are going to have a complicated summer ahead based on both the number and stature of their unrestricted free agents. There is no doubt in my mind that Pavelski will receive offers in the $7.5-9 million range per season. Depending on how things shake out, the Sharks would have plenty of cap space to utilize if say, Karlsson signed elsewhere. Even if that happens though, is it wise to spend $8 million per year on a 35-year old? Potentially for three years?

Two years ago the Sharks would not go longer than two years with then 37-year-old Patrick Marleau.

In one sense, it may make more sense for the Sharks to keep Karlsson if it comes down between EK65 and Captain America. Karlsson is significantly younger, he turns 29 in May. But what about his current groin injury? Karlsson had an ankle injury last season and now a problematic groin.

Karlsson will also command top dollar, in the $10 million per-year range even with his injury concerns. The Sharks already have Brent Burns who isn’t going anywhere. Furthermore, top draft pick from 2018 Ryan Merkley is a puck-moving defenseman who could be ready sooner rather than later.

As far as right-handed center prospects, the Sharks have 2016 second-round pick Dylan Gambrell who has had a nice season with the AHL Barracuda this year (40 points in 44 games). He is certainly closer to NHL ready status than Merkley, but according to scouting reports, Merkley is far likelier to be a future star.

As great as Karlsson is—arguably the top defenseman in hockey—it might make more sense for the Sharks to keep Pavelski. Elite right-handed centers are hard to come by in this league. The Sharks have proven they can be a tough team to beat over the years long before Karlsson arrived in September. But can they compete without a top-tier, right-handed centerman like Pavelski? How do they replace the impact their captain brings to the table?

At the start of the season, this writer was completely okay with the idea of Pavelski potentially walking at the end of the season. But the Wisconsin native has reminded us this year why he has the nickname “The Big Pavelski.” Without him these past four games, there has been a noticeable, giant, gaping hole in the lineup. I’m not so sure anymore that the Sharks could afford to lose him and still be a top-5-7 team.