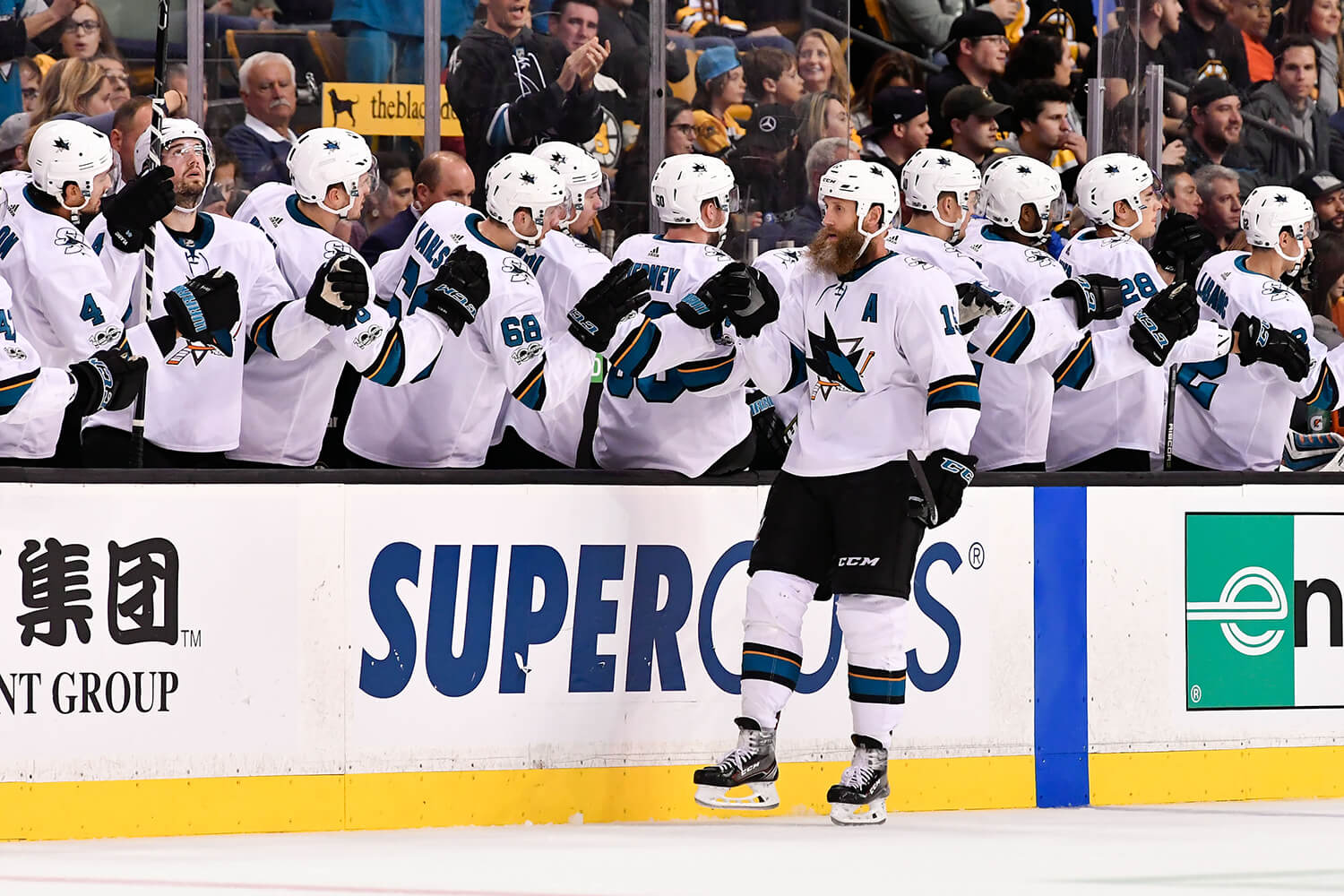 How the Sharks Are Living up to Their Locker Room Mantra

On the wall of the hallway leading into the San Jose Sharks’ dressing room are the words “Exceed Expectations.”

Now when the Sharks acquired Erik Karlsson back in September, the hockey team residing in the capital of the Silicon Valley instantly became Stanley Cup favorites. So the fact that the Sharks find themselves waking up on a Sunday in March in sole possession of first place in the Western Conference isn’t particularly newsworthy. It would be a fool’s errand to attempt to argue that being in first place means the club is “exceeding expectations.”

However, the manner in which the Sharks have swarmed opponents lately is incredibly impressive. With an overtime win over St. Louis on Saturday, San Jose has caught and surpassed the Calgary Flames for first place in the Pacific Division and in the Western Conference. The win capped off a perfect 4-0 homestand, one in which Karlsson didn’t even play.

Not only were the Sharks without Karlsson, they were also without star winger Evander Kane—a player to be discussed in more detail later in this piece—for the entire homestand. Yet even without two of their marquee players, San Jose still took care of Colorado, Chicago, Montreal and St. Louis. Three of these teams are absolutely desperate for points in an attempt to make the playoffs, and the other, St. Louis, is very much within striking distance of catching Nashville for home-ice advantage in the first round.

So how are the Sharks managing to play at such a high level despite their injuries?

One of the biggest reasons for their continued strong play is their denial of Father Time.

Heading into this season Joe Thornton, 39, and Joe Pavelski, 34, were supposed to take steps back. Given their recent injuries and advanced age, even the optimistic Sharks fan would have said 40 points for Thornton, and maybe 20-25 goals for Pavelski.

This type of production from the Joes would have been fine, because younger players like Tomas Hertl and Timo Meier would elevate their games. And by all measures, those two have done exactly that. Both Hertl and Meier have morphed into elite, nearly point-per-game players this season. They are now two of the most dominant power forwards in the game.

But there’s no way that the Sharks’ young guns would blossom into stars while their old guys maintained their star status, right?

Nobody has embodied the Sharks’ “Exceed Expectations” mantra more this season than the old guys in Thornton and Pavelski.

Pavelski merely matching his 22 goals from last season would have been a welcomed sight. However, in absolutely remarkable fashion, Pavelski earned a spot in this year’s All Star Game. He has already scored 14 more goals this season than last season with 14 games still remaining. With 36 goals Pavelski is four shy of what would be just his second ever 40-goal season. Pavelski is not supposed to be in his prime anymore, but he has an outside chance at matching and surpassing his career-high mark of 41 set back in 2013-14.

As it turns out, Pavelski was playing through hand and wrist injuries that limited him for a large portion of last season. Yet even with healthy hands, being able to produce a career year in goal scoring at 34-going-on-35-years old is far beyond anyone’s reasonable realm of expectations.

For Thornton meanwhile, at almost 40-years old and coming off back-to-back seasons ending in major knee surgery, a half-a-point-per-game rate would have been an optimistic expectation.

Amazingly Thornton has exceeded the half-a-point-per-game rate by a healthy margin. With 40 points in 59 games, Thornton has actually produced at a .67 points-per-game average. And better yet, now that he is fully healthy and recovered from his offseason surgery, his game has elevated to a new level. Over his past 25 games dating back to Jan. 7, Thornton has accumulated 22 points. That’s a 72-point, 82-game pace. In other words, when healthy, Thornton is astonishingly still producing like a top-line center. Again, he is 39-years old. THIRTY-NINE.

Inside Hockey was fortunate enough recently to be able to catch up with Sharks color commentator Jamie Baker and get his thoughts on how Thornton and Pavelski have been able to “Exceed Expectations” by continuing to deny Father Time.

“They certainly are exemplifying [‘Exceed Expectations’] this year. Joe coming back from the knee surgeries, Pavs at 34, battling injuries last year, and just how well both these guys are playing this year. But this isn’t new, this has been their mantra and who they have been for a long time,” chimed the broadcaster and former Shark himself.

“Their preparation, their work ethic, their attention to detail, the way they treat people on and off the ice, the way they take care of themselves, all of that is ‘exceeding expectations’ because the hardest thing to do other than make the NHL, is to be consistently great in the NHL for a long time.

We see it where people have slumps and especially goaltenders they will have one or two good years and then they are off, or whatever it might be. The culture of ‘Exceed Expectations’ has dripped through the entire dressing room. I would love to be a young player coming up playing for the San Jose Sharks and getting to play with guys like Pavelski and Thornton and watching what they do to be so good on a consistent basis.”

Baker would add that one of the key personality traits that allows the Joes to be able to maintain their work ethic and attention to detail is their competitive spirit.

“The greats all have one thing in common: an undeniable love and passion for the game that propels them to do more than others. Yes they have the skill set, and the mind set, but they just have an unrelenting, insatiable desire to get better on a day-to-day basis.”

The Sharks have qualified for the playoffs in 12 of the 13 seasons since acquiring Thornton back in 2005-06. Consistently high expectations each season have created a winning culture inside the Sharks’ dressing room. While that culture has no doubt been cultivated in part by General Manager Doug Wilson and the various ownership groups’ willingness to spend near the salary cap, the largest part has been cultivated by Joe Thornton.

Thornton saved this franchise from the abyss. The Sharks had lost 10-straight games before his arrival, as they were on track to miss the playoffs for the second time in three years in ‘05-06. For the majority of his 13 years as a Shark, Thornton has driven the bus for San Jose. A bus that has delivered them to tremendous on-ice success. With Thornton, the Sharks have advanced to the second round of the playoffs (or further) eight times in those 12 playoff appearances. In total the team has won 12 playoff series with Thornton. Averaging a first-round playoff series win every year? Essentially a top-8 team in the league every year for over a decade? That’s pretty damn impressive.

That said, Thornton isn’t just a guy who cares desperately about winning. He’s also one of the most well-liked guys in the locker room. Former teammates are often telling people how “Jumbo has never had a bad day at the rink.” Thornton loves to say “for the boys” when asked about his own accomplishments. The boys love him back just the same, because in both stature and personality, he is basically the Sharks’ version of King Leonidas from 300. He will go to bat for every one of his teammates. He famously defended Hertl by fending off a question on whether Hertl showboated his fourth goal by using some colorful commentary.

In addition to coming to Hertl’s aid, Thornton also went out of his way to welcome Kane to the Sharks last spring. Despite the “bad-boy reputation” that had been tagged to Kane from his Winnipeg days, the Sharks welcomed Kane into the fold like a city would welcome the Queen of England. Thornton was the one to pick up Kane at the airport. Surely something he didn’t have to do, but he did it anyway.

While Thornton and Kane didn’t actually play in a game together as teammates until this season, Kane meshed perfectly with the Sharks down the stretch run last season. Kane scored nine goals and 14 points in 17 regular season games last year in helping the Sharks ride into the playoffs on fire, where they swept the Ducks in the first round. This season Kane has continued to flourish as a Shark. With 27 goals in 64 games, Kane has produced his highest goals-per-game rate of his career at .42. And there hasn’t been a single hint nor whisper about him being anything other than a great teammate.

“This is a credit to Doug Wilson, his staff and the coaching staff,” remarked Baker on how Kane has fit in with San Jose.  “We have a great coaching staff here. This is [Head Coach Pete] DeBoer’s third tour of duty [as an NHL coach] and he has a good pulse on the room on how to communicate with the players.

What they have done is create a culture, and this comes from management and coaching, but then the onus is on the players, and it starts with Thornton, but like be who you are. We don’t want you to change. But we have minimum standards here and they are significant, the details and the habits, the discipline from a defensive standpoint, willingness to backcheck, block shots, all those things, win battles, get inside body position.

So what the culture has done over time has allowed them to bring in guys and it doesn’t matter who they are. So we use Evander Kane [as an example] and he gets to come in and be who Evander Kane is. He likes to dress well, he likes the suits, he likes to go on social media. Great! Do it! Come to the rink, we wanna see what suit you are wearing that night. You know what else we wanna see? We wanna see how fast you are, we wanna see you bring the physicality and play that abrasive style with that edge. We wanna see that shoot first mentality attacking the net, we wanna see you raise your arms up and pump the crowd up every now and then because that’s who you are. But we want you to do all that within the confines of the structure, the systems and the identity of the San Jose Sharks. And he knows it’s not the Evander Kane show, it’s the San Jose Sharks show, and he’s one piece. But he’s with so many other good pieces, it’s just bringing out the best out in him.”

So not only are the old guys exceeding expectations, but their continued locker-room presence and on-ice dominance has allowed others, like Kane, to exceed expectations too.

With a roster chock full of players having stellar seasons, this might just be the year that the Sharks finally exceed the expectations of their annual doubters and win the franchise’s first ever Stanley Cup.