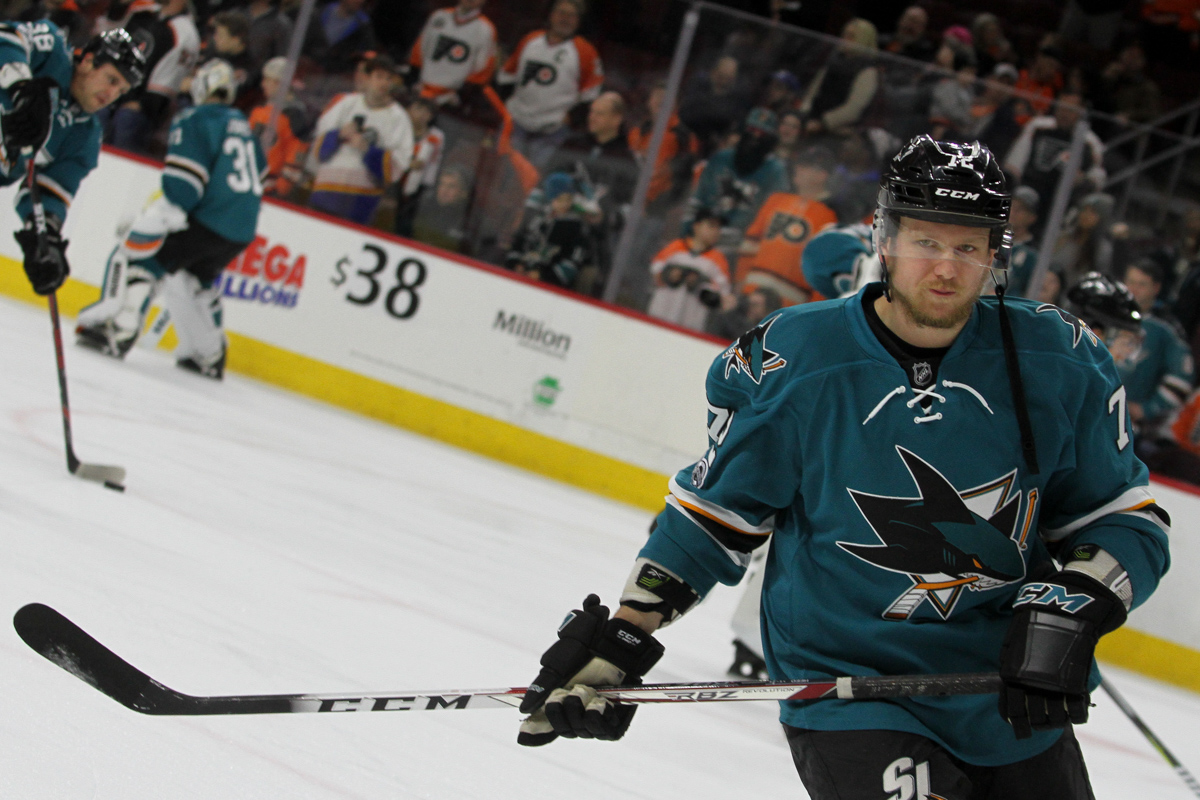 Sharks in Danger of Losing “Hidden” Gem For Nothing

The San Jose Sharks have been incredibly impressive over the years. The Sharks have only missed the playoffs once in the 15 seasons since Doug Wilson took over as General Manager.

One of the reasons for such a sustained high level of play is Wilson’s superb asset management. When one stops to think about former Sharks around the NHL, there isn’t a single player who can realistically be described as “the one who got away” for San Jose.

Free agents from other teams (I see you, John Tavares) do seem to shy away from signing in San Jose. But whether that’s primarily due to the high California state income taxes or some other reason matters little. The Sharks rarely find themselves swimming through tough free agent waters because they never lose their own star players.

For instance, Wilson has acquired the following star players via the trade market:

From this group only Guerin and Campbell left as free agents. Thornton, Boyle, Burns, Jones, and Kane all re-signed with the Sharks. Heatley was traded and the jury is still out for Karlsson and Nyquist.

Five out of seven players may not quite sound like “always” retaining impact players. But those are just the players acquired via trade. This discussion is about keeping all key players. Ergo, one must include all the various extensions that Sharks’ draft choices have signed. Patrick Marleau signed multiple extensions before leaving in his late 30s. Logan Couture, Joe Pavelski, Marc-Edouard Vlasic, Justin Braun and Tomas Hertl all signed long-term extensions to stay in San Jose.

Unless one chooses to include Panthers’ forward Mike Hoffman, who was a Shark for less than 24 hours this past offseason, then Tierney is the highest point getter of former Sharks this season with 45 points. Marleau has just 36 points, Boedker 33 and Coyle 30.

The point to be had is this:

However, there is a good chance that will change this offseason—even if Karlsson, Nyquist and Pavelski all decide to sign extensions.

San Jose has seven pending unrestricted free agents on their roster. The most noteworthy of those free agents (outside the three mentioned above) are Joe Thornton and Joonas Donskoi. Fourth-line enforcer Micheal Haley is also slated to be a free agent.

However, there is one additional soon-to-be free agent on the Sharks roster that nobody seems to be talking about.

That would be defenseman Tim Heed.

Owning a nickname of “Howitzer Heed,” it should come as no surprise to readers that the 28-year old owns a rocket of a slap shot. He also managed an impressive plus-15 rating through his first 25 games this season. His 25th game was on Mar. 12 in a game where the Sharks won 5-4 in overtime over a tough Winnipeg Jets team. The Sharks were playing the second of a brutal back-to-back situation on the road. It was also their fourth game in six nights. Yet in spite of all that, Heed finished the Winnipeg game with a plus-3 rating.

Heed has now played in just 30 of the team’s 74 games this season, serving mostly as the team’s seventh defenseman. There have been weeks at a time where Heed remained a healthy scratch. Through it all, Heed has managed a solid 11 points during his sporadic playing time. Nine of those 11 points have come at even strength, despite averaging just 14:14 in ice time.

If Heed were to maintain that type of production rate in a top-four defense role, he would be a 40-50 point defenseman.

“When you’re a seventh or eighth defensemen, you need to have a good attitude about your work ethic every day when you are out of the lineup. When we look at Tim Heed, why has his plus/minus been so high? I think ultimately his attitude has been in the right place prior to getting in the lineup,” remarked Sharks’ Radio and Television Analyst Bret Hedican. (The former two-time Olympian and 2006 Stanley Cup Champion defenseman was nice enough to chat with Inside Hockey about Heed’s play this season.) “When he got tapped for the opportunity to play he was ready. With him being in there he has done exactly what he has needed to do for a young player. He has used his strengths. For Tim Heed that is his ability to think the game. He is big enough to not get beat physically in his own end, but because of his smarts, he uses his stick, positions his body where he can break plays up defensively.

Over the past couple weeks Heed has been paired with Sharks’ long-time defensive stalwart Marc-Edouard Vlasic. For the first three-plus months of the season Vlasic was having the worst extended stretch of his career. Vlasic and long-time defense partner Justin Braun looked a step slow with their foot speed and puck movement. For the first time since 2007-08, Vlasic was in the negative double-digits in plus/minus. On Dec. 23, Vlasic fell as low as minus-16.

However, since Heed came back into the lineup, replacing the injured Karlsson, Vlasic has been a plus-6 in nine games. His overall season rating has improved to minus-6 through Mar. 18. With Vlasic and Braun getting older, they both have seen a dip in their possession numbers. That’s not surprising given they are both defensive-minded defenseman. At this stage of their careers, it appears both benefit better from playing with a true puck-moving partner. Over the past couple of weeks, that is what Heed has been for Vlasic.

“If you ask Marc-Edouard Vlasic the difference between Tim Heed and Erik Karlsson, I think right now the way it has been working, he would prefer to play with Tim Heed. And that’s kind of a head scratcher when you think about Erik Karlsson and how good he is, but some guys just work well with others and I know that as a defenseman, understanding what a partnership and what a defensive pair feels like. The demeanor of Tim Heed has really worked well with Vlasic.

It’s a really good pickup by you to see that. And what you’re seeing is reality. Vlasic now the past few games, a four-game point streak, he’s playing better as of late and one of the guys who has helped him get back on track is Tim Heed. I think Heed has done a good job of being a very reliable partner for Vlasic.”

It has been puzzling, to say the least, on how little the Sharks have used Heed at the NHL level. After being drafted by the Anaheim Ducks in the 5th round in 2010, Heed played professionally in Sweden until signing as a free agent with the Sharks in the summer of 2016. Already 25-years old, adjusting to the smaller North American ice surface proved to be a relatively easy transition for Heed. He dominated the AHL, scoring 56 points in 55 games as a top-pair defenseman for the San Jose Barracuda in 2016-17.

In other words, Heed proved he could be an elite-point producer while also being strong enough defensively to play against top-line AHL forwards. One would think that this type of performance would translate into a regular third-pairing role at the NHL level. That is the way the 2017-18 season started at least. Heed found early season chemistry with Brenden Dillon on that third pair.

Through his first 10 NHL games during 2017-18 Heed picked up seven points, playing in all 10 of the Sharks’ games from Oct. 12 through Nov. 1. While his production would slow down to the tune of just three points over his next 14 games from Nov. 4 to Dec. 21, his plus/minus rating over that span was only minus-3. Heed’s play dipped, but not in a major way. Yet, despite remaining healthy, Heed only played in five games the rest of the season. Dylan Demelo took over the sixth spot for basically the remainder of the campaign. Demelo though, who was traded to Ottawa this offseason in the Karlsson deal, only ever scored a high of 24 points at the AHL level. A far cry from Heed’s 56.

“I think you’re making a good point,” remarked Hedican when prefaced with the idea that the Sharks might be in danger of losing Heed without really figuring out what they have in him. “He’s a plus-13 in 28 games, he has 11 points, he’s not getting first power play minutes, he’s not getting top-four minutes. He’s being able to do it with less minutes with the other guys in this lineup. Those are very different questions to answer. And can the Sharks sign him and keep him here when he might get offers that are much more elsewhere because they are both willing and able to pay someone like Tim Heed more money?”

There is little doubt in this writer’s mind that there will be teams willing to sign Heed to a two-year, $6-million dollar contract. That would be almost a 500% salary increase for Heed, who is currently making just $650K.

Unfortunately, even if the Sharks move out Braun’s contract, the Sharks won’t be able to afford Heed at $3 million per season if they are to resign Karlsson and Pavelski. If either Pavelski or Karlsson sign elsewhere though, the Sharks will certainly have enough to pay Heed a handsome raise.

With so many free key free agents and Thornton’s widely perceived willingness to take a big hometown discount, there will be a lot of moving parts this offseason for San Jose. Chances are though that either one of Pavelski, Karlsson or Heed will be playing elsewhere next season.

And while losing Heed may sound like the easiest loss to stomach on paper, at 28-years old he is mack dab in the middle of his prime as a defenseman. And despite being in said prime, the Sharks haven’t really given themselves a chance to discover what they have. They’ve only used Heed sparingly, despite his performance in the AHL and limited NHL minutes suggesting big potential. Heed could become a top-4 defenseman who scores 45 points while playing average-to-above average hockey in his own end.

Now had the Sharks played Heed as a regular last season and this season, it is possible he would have already reached that potential. That would have allowed them to possibly sell high on Heed at this year’s trade deadline, which would have been wise asset management.

Sadly, the team didn’t do that. When it comes to asset management the Sharks are usually on top of it. However, in the case of Tim Heed, one could argue they quite literally dropped the ball (or puck, if you will).

They might lose Heed for nothing this summer as a free agent, and if that happens, there’s a good chance he becomes a rare former Shark to flourish on his new team.