On March 12th, the New Hampshire Wildcats ended their 2016-2017 season at the Tsongas Center, falling 8-2 to the UMass Lowell Riverhawks. Almost seven months later, the Wildcats returned to Lowell to begin the 2017-2018 season. They had a tall task ahead. After their series win against UNH, Lowell went on to win the Hockey East Tournament and fall in the Northeast Regional Final to Notre Dame. They unfurled the banners of their remarkable season before the game and the rabid fans were ready for the opening faceoff. Their team was ranked 5th in the nation at the start of the night. New Hampshire was David in this game and looked it early. 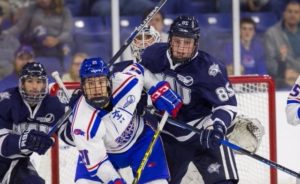 Shane Eiserman did get two shots away in the first four minutes of play, but Lowell took the early control after that. The Riverhawks fired ten shots on goal in the first period and put New Hampshire on their heels. UNH played defensively and made a mistake when Jason Salvaggio was called for a cross-checking penalty only 4:03 into the game. Lowell didn’t score on the power play, but three seconds after the advantage lapsed, Connor Wilson fired a shot from the slot to give Lowell a 1-0 lead. Lowell kept attacking, but Danny Tirone stood strong and kept his team in the game. He made nine saves, most in grade A scoring positions.

As the second period got underway, the ice tilted in UNH’s favor. The Wildcats fired 15 shots on goal and limited Lowell to only 4 shots in the period. Lowell did have two power plays in the first ten minutes of the frame but generated no shots on those advantages. After the second UNH penalty, Ryan Lohin gave away the advantage, committing a hooking penalty. During the 4-on-4, UNH tied the game when Marcus Vela fished the puck out of a crowd in the goalie crease and put it home. Only 45 seconds after the goal, Frankie Cefalu got out of the penalty box, stormed down the ice, and found twine to give UNH a 2-1 lead.

Through two periods, David was leading Goliath. The third period saw the teams trade blows and battle to a classic end. Lowell drew a power play on Dylan Chanter’s interference penalty. John Edwardh ripped a shot by Danny Tirone and tied the game at 2-2. UNH reclaimed the lead at the halfway mark of the period. Ara Nazarian got to the right circle and threw a shot on Tyler Wall that just happened to find an opening. Trailing 3-2, the clock began to run out on Lowell.

Then New Hampshire committed a critical mistake when Marcus Vela committed a hooking penalty with 1:59 left to play. To add pressure, the Riverhawks pulled Wall from the net for an extra attacker. Lowell made UNH pay when Jake Kamrass tipped home a Ryan Lohin shot with 1:14 left. New Hampshire did not shrink from the challenge and went after the win. In the final seconds, freshman Max Gildon threw the puck on net from the blue line. The puck went off Tyler Wall’s pad and Shane Eiserman got to the puck. He put a backhand shot by Wall and gave UNH a 4-3 lead in the final 14 seconds of the game. Lowell once again pulled their goalie for an extra attacker, but could not get another shot. David beat Goliath to open the season.

UNH Head Coach Dick Umile liked the effort given by his team but kept focused on the long year. “We’re happy winning here. It’s a hard building to play in. But we know its only game one, and we’ve got more to work on.” UNH took seven penalties and lost the faceoff battle 42-34. Danny Tirone only made 20 saves, but 15 of his saves were on mid to high-level scoring chances. The Cats got a balanced attack and found a way to work through adversity, but they have more to go.

Riverhawk Head Coach Norm Bazin was not happy after the game. “I didn’t see a lot of urgency in the second. We only got four shots the entire second period and had two power plays. You can’t win at any level playing like that. We forgot how to work.” Lowell will have a chance to rebound against the Wildcats tomorrow night. The teams resume their series on Saturday night at the Whittemore Center in Durham, N.H., at 7 pm.

Hughes the Key to Canucks’ Rejuvenation

Quinn Hughes is has developed into one of the NHL’s top defensemen, and his uptempo style of play will be needed to help the Vancouver Canucks dig themselves out from a near-disastrous 2021-22 season.