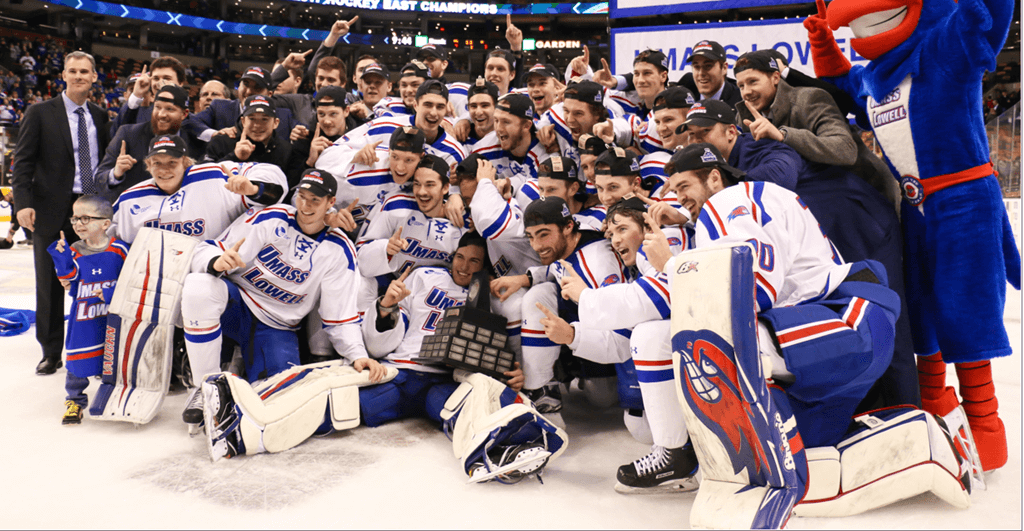 Lowell came out in attack mode, capitalizing on Eagle mistakes. CJ Smith forced a turnover and got a puck by Joseph Woll to give Lowell a 1-0 lead only 1:06 into the game. The period then got ugly, with seven penalties between the teams in the opening 20. On one of these penalties, a Jake Kamrass boarding penalty, BC evened the score. A quick faceoff win led to a shot from the top of the left circle from Austin Cangelosi ten seconds after the penalty was called and a tie game. Lowell got the lead back with a Chris Forney shot from just inside the blue line after the halfway point of the period. BC then annoyed and thrilled their fans with two special teams sequences. Dylan Zink was called for holding. 21 seconds later, Ryan Lohin was called for hooking.

BC had 1:39 of five on three and another 21 seconds of a man advantage after that, and failed to score on the advantage. Six seconds after Lohin’s penalty expired, Colin White was hit with an elbowing penalty. BC was on the penalty kill and made the most of it. Graham McPhee forced a turnover, drove it the other way, and tied the game with his second goal of the season. The game went into the first intermission tied 2-2.

The pace of play slowed down immensely to start the second period. Both teams were running on fumes after long and brutal Hockey East seasons and tournament runs. At the halfway point of the period, Lowell found another offensive burst and took the lead. Matthew Gaudreau drew a hooking penalty, and Lowell’s top line went to work. John Edwardh went to the net and put in a rebound to put Lowell up 3-2. 1:32 later, the Riverhawk’s top line struck again. Joe Gambardella found a tiny space over Joseph Woll’s left shoulder and shot it there to give Lowell a 4-2 lead. BC would get their chances, outshooting Lowell in both the first and second periods, 13-11 and 13-12 respectively, but they could not get more pucks in the net. They trailed with their season on the line and needed a good third-period performance to at least force overtime.

The Eagles played hard in the third period, dominating the shot totals, 15-2, fighting for their NCAA Tournament chances. They killed a Colin White tripping penalty and had a power play after a Nick Master tripping penalty. They could not score. BC mounted more of an assault and made Tyler Wall play his best hockey of the season. He did, making 38 saves.

With three minutes left in the game, the Eagles cut into the lead, Joseph Woll headed to the bench so the Eagles could have an extra skater. It worked, as Ryan Fitzgerald threw a puck on net that bounced off Wall’s leg and across the goal line.

BC mounted one last rush with their net empty, but could not get the equalizer. Ryan Fitzgerald just barely missed tying the game when his shot rang off the corner of the post and bounced out. Lowell won their third Hockey East Championship in their fifth consecutive trip to the Garden for the title game.

The Eagles likely will not make the NCAA tournament, so their season will end with a 21-15-4 record. Seniors Austin Cangelosi, Ryan Fitzgerald, Matthew Gaudreau, Scott Savage, and Captain Chris Calnan will graduate after long and decorated careers in Chestnut Hill. BC is a young team and will be competitive for years to come.

Lowell’s Norm Bazin praised his team for putting in the effort to raise another banner at Tsongas Center. The win gave Lowell their third conference title, all of them with Bazin at the helm. The Riverhawk alum explained that his players are not normally finished products, as Lowell tends not to attract many of those. His players worked hard to earn their respect and get better. Joe Gambardella and CJ Smith agreed with their coach and were elated with the win. Lowell will likely be a #1 seed in the NCAA Tournament. They have to wait until the NCAA Selection show at Noon on Sunday to find out where they go for the regional tournament and who they will face.