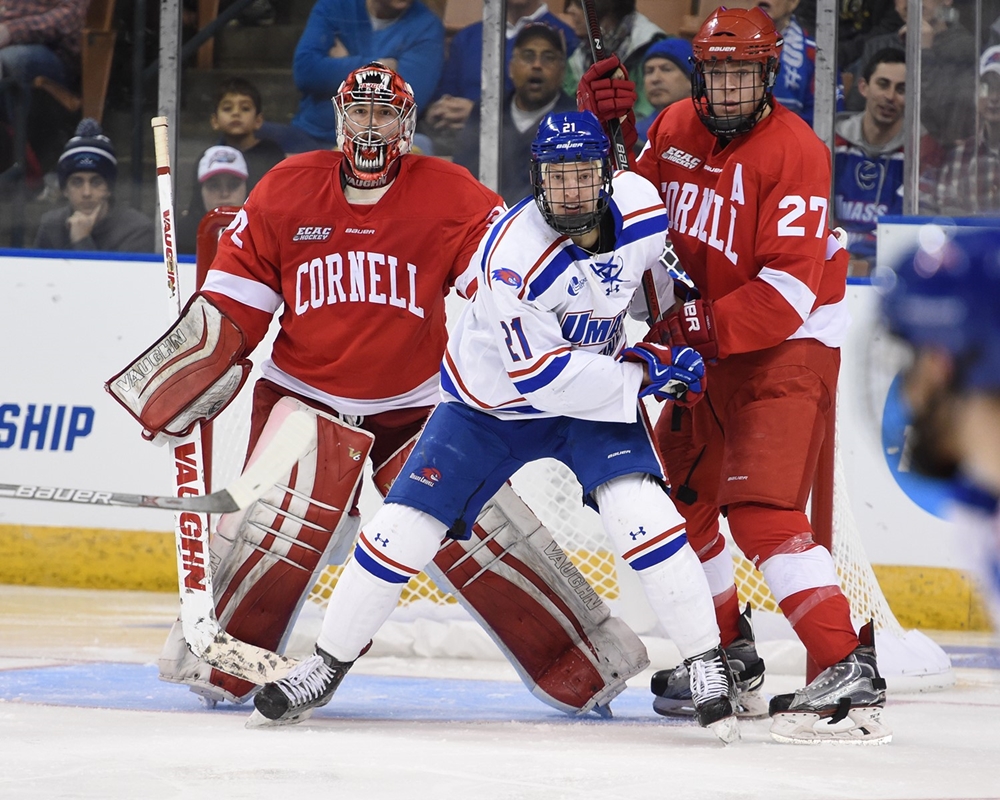 On March 17th, the UMass Lowell Riverhawks and Notre Dame Fighting Irish met in the Hockey East Semi-Finals in the Boston Garden. Lowell controlled the game from beginning to end, winning 4-1. That ended Notre Dame’s last chance for a Hockey East Championship and propelled Lowell to their third Hockey East Crown.

Nine days later, the teams met again in the NCAA Regional Tournament in Manchester. The arena was smaller but the stakes were higher. Lowell came in on a roll after beating Cornell 5-0 the previous day and had success against Notre Dame.

The Irish were pushed to the limit in the Opening round game against Minnesota. Lowell was the favorite to make the Frozen Four. Notre Dame knew that and battled right down to the wire, giving college hockey fans another classic game.

The first period was as even as it could get. The teams matched each other shot for shot and thrilled the fans at SNHU Arena. Just after the halfway point of the 1st period, Notre Dame landed the first punch of the game. Lowell turned over the puck at the blue line and Cam Morrison made them pay by collecting his own rebound and taking a 1-0 lead.

With time winding down in the period, Lowell came alive. Ryan Collins found the puck on his stick with the net open and scored his first goal of the season with only 1:02 left to go in the period. The teams went into the intermission tied 1-1 and everyone knew a classic was on tap for the day.

The second period was thrilling and close despite the lack of goals. Lowell controlled the pace for much of the period. They had three different power plays and generated five shots and many more good looks on the man advantage. Notre Dame’s penalty kill held true and the Irish survived all three Riverhawk power plays. Lowell outshot the Irish 9-8 for the period with both goaltenders, Cal Petersen and Tyler Wall, standing firm. Neither team scored and the third period was set with a 1-1 tie.

Lowell came out aggressively to start the final 20. Their aggression was rewarded when John Edwardh tipped in a Tommy Panico blue line shot just after the halfway point of the period to take a 2-1 lead.

Lowell looked like they may have landed the killing blow. But Notre Dame did not cave. 3:05 after the Edwardh goal, Cam Morrison collected his 2nd goal of the game on a backhander to tie the game up at 2-2. There were more chances.

Lowell had the majority of them, but Petersen stood strong and the game went to overtime tied 2-2.

When the extra session got underway, both teams showed signs of fatigue but still got a shot away. Lowell went first, but Petersen did his job. Notre Dame came back the other way and found their opening. Anders Bjork played the puck behind the goal, found Andrew Oglevie in front for a shot, and Notre Dame punched their ticket to the program’s third Frozen Four trip.

Tyler Wall finished with 25 saves for Lowell while Petersen had 27 for the Irish. Bjork had five points on the weekend with two goals against Minnesota and assisting on all three goals against Lowell. For his efforts, he was voted the Most Outstanding Player for the Northeast Regional.

The Lowell Riverhawks end one of the best seasons in program history in heartbreaking fashion. They finish with a 27-11-3 record and established themselves as one of the premiere programs in the country. They won their second regular season Hockey East title, went to their fifth consecutive Hockey East Title game, won the third Hockey East championship in Lowell history, and was a bounce and a save away from going to the program’s second Frozen Four.

Coach Norm Bazin and captain Michael Kapla were both crushed after the game. They both believed they had the team to move onto the Frozen Four and maybe even win the whole thing. Instead, the Riverhawks conclude a phenomenal season on a down note. Seniors Joe Gambardella, Dylan Zink, and Michael Kapla will leave the program in a stronger position than it was upon their arrival when they walk for graduation.

Notre Dame moves on to the Frozen Four for the first time since 2011. Coach Jeff Jackson admitted that Lowell is the best team the Irish played all season and that losing to the Riverhawks back in Boston did help them understand how to win against them in Manchester.

Cal Petersen was particularly happy about the win, considering that he spent the hardest years of his hockey youth in Chicago and will play the in Frozen Four at the United Center. Notre Dame plays the Denver Pioneers on Thursday, April 6th.