Providence, RI — Providence College ended the 2018 season a single goal short of the Frozen Four. The Friars surrendered a goal in the last two minutes of both the second and third period against Notre Dame to miss out on flying to St. Paul. This season, PC advanced to a similar stage: a game away from winning the East Regional to advance to the Frozen Four and facing a defensive minded team in the Cornell Big Red. Providence used the traditional Big Red playbook to satisfy their fans at the Dunkin Donuts Center and clinch a spot in the Frozen Four.

Through an evenly paced opening frame, the teams agreed on a physical and defensive minded style. PC only won the shots slightly, 8-6, and capitalized on a chance for the lead. Greg Printz went to the front of the net and redirected a Jacob Bryson shot over Austin McGrath for a 1-0 lead.

The Friars never relented their pressure. The shots were 14-4 in the second period and the pace felt even more lopsided towards the Friars. Jack Dugan triggered the first scoring play when he wheeled around the zone and fired a puck on net. McGrath stopped it. Kasper Bjorqkvist corraled the puck and shot it, only to redirect it off Josh Wilkins’ skate and into the net 1:40 into the frame. PC’s second goal of the period came after an Alec McCrea holding minor. Josh Wilkins fired a shot toward the net and Scott Conway redirected the puck into the goal for a 3-0 PC lead with 0.6 seconds left before the intermission to break Cornell’s back.

The Big Red pushed back in the third, nearly doubling their game shot total from 10 to 19, but could not beat Hayden Hawkey. The senior from Parker, CO, recorded his 16th career shutouts and 8th of the season, a national high.

As time wound down, Brandon Duhaime capped the night with an empty netter. The score ended 4-0, Providence wrapped up the Cornell season, and the Friars clinched a spot in their fifth Frozen Four in program history. 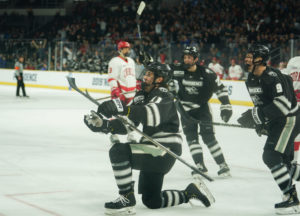 Cornell concludes their season at 21-11-4. They won at least a share of the ECAC Regular Season for the second year in a row, reached the NCAA Tournament for the third straight year, and won their first Tournament game in seven seasons.

This was the first time Cornell was shutout this season.

“Congratulations to Providence,” explained Head Coach Mike Schafer. I thought that they played a heck of a game tonight. They did exactly what we have been doing to a lot of teams for many years – get the first goal – and I thought that they were outstanding staying above us for the rest of the night. They made things very difficult. In the game, some of the areas, we lost some of our keys. We talk about net-front opportunities, about not giving them up and getting some, and we gave up a couple of them on the first two goals. They were both netfront plays. It was disappointing.”

Austin McGrath stopped 25 of 29 shots. Coach Schafer admitted that his sophomore goalie from Lloydminster, Alberta, will get surgery later this week, though he declined to explain the reason for surgery.

Providence improves to 24-11-6. This is the first Frozen Four appearance since 2015 for the Friars.

“I’m proud of this team,” expressed  Scotty (Conway) really stepped up today. (Jack) Dugan stepped up too, a lot of different guys stepping up and that was very similar to that (2015) run. Both teams had mobile D corps. This team keeps growing and that’s what’s exciting right now.”

On the question of home ice helping, Providence players downplayed the closeness to campus. Scott Conway explained: “We don’t really consider this a home-ice advantage like teams were saying. I think that even though we had our fans here which definitely helped, but at the end of the day we’re playing in a different rink, we’re staying in a hotel like everyone else and we’re doing everything that those guys did so I don’t think there’s really that big of an advantage, but seeing our fans and students there was great.”

Hayden Hawkey added: “We haven’t really played in this rink since two years ago. So, it’s a brand new building to us too and that was something we had to adjust to just like everyone else.”

There are two Hockey East teams going to Buffalo, along with UMass. PC will face the Minnesota-Duluth Bulldogs at the KeyBank Center. This will be the first time the programs have met since the 2016 NCAA Northeast Regional’s semi-finals. Duluth won that game 2-1. The teams’ matchup on April 11th for a spot in the National Championship game.