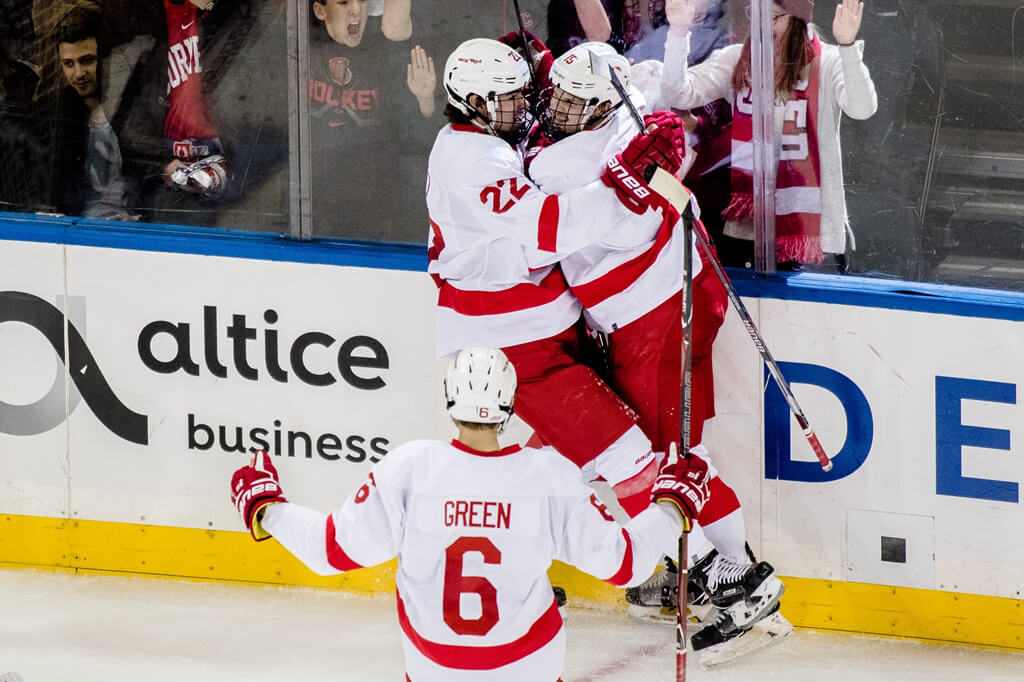 Providence, RI — Cornell’s season has been frustrating. A plague of injuries limited the Big Red’s capabilities. The most visible is starting goaltender Matt Galajda and regular forward Jeff Malott leaving the ECAC Championship game against Clarkson, only for the Big Red to falter and drop a 3-2 final to the Golden Knights, thus costing the Big Red their first Conference crown since 2010.

Their body of work still earned a spot in the NCAA Tournament for the third year in a row and they drew a sizzling Northeastern team eager to erase Tournament disappointments. Cornell played to their identity and silenced the Huskies.

The opening period was a perfect exhibit of Cornell’s historical habits: get an early lead and outmuscle opponents. The goal came courtesy of Beau Starrett only 4:02 into the game. His shot squirted under Cayden Primeau’s right arm and into the net. Northeastern had been dictating pace of the game til then, but could not muster much more for the remainder of the frame.

The Northeastern wheels fell off in the second period. Mitch Vanderlaan started the scoring 57 seconds into the frame by slicing beautifully through the defense to double the CU lead. Morgan Barron then forced a turnover and increased the lead to 3-0 before the middle point of the period. Liam Pecararo sat for a holding the stick minor while Michael Regush potted a rebound to punctuate the rout. Northeastern did fire back with Liam Pecararo scoring on a rebound following a Kyle Betts roughing after the whistle minor. But the game was out of hand.

Brendan Locke scored an insurance goal early in the third and CU held Northeastern to only four shots in the final frame. Cornell closed out a 5-1 victory, their first NCAA Tournament win since defeating Michigan in 2012.

Northeastern concludes their season at 27-11-1. They won a second consecutive Beanpot and the Hockey East Tournament while setting the program record for wins in a season. Sadly, they could not carry momentum into the NCAA’s. They still have not claimed a Tournament win since topping Merrimack in the opener of a three game series in the 1988 Tournament. The Huskies ultimately lost that series and have not advanced in the dance since 1982, when they defeated Jerry York’s Bowling Green Falcons in a two-game aggregate series to reach the program’s first, and still only Frozen Four.

“I said to the group that I don’t want to dwell on this game,” explained NU Head Coach Jim Madigan. “I know that at this part, we’ll talk about the game, but to our group in the locker room, it wasn’t about tonight’s game. When the game was over, it was about what they accomplished during the course of the year and how proud we were as a coaching staff with the group of young men in the locker room and how they represent the institution well. They were champions. They were Beanpot and Hockey East champions. The senior group that leaves, leaves with a lot of accomplishments. It was just unfortunate that we didn’t have it today. As I said, tip the cap to Cornell for a well-played game. ”

“We just knew that they had a good balanced hockey team and we were really disappointed to not win the championship last week in the ECAC against Clarkson who’s got a heck of a team,” commented Cornell Head Coach Mike Schafer. “I think everybody doubted whether we were able to get the thing done today with losing Matty and losing Jeff up at Lake Placid and it shows the resiliency of our hockey team.”

Cornell will face Providence College on Sunday afternoon with a spot in the Frozen Four on the line. Cornell has not reached the Frozen Four since 2003, the last time it was held at this year’s site: Buffalo. Puck drops at 4 pm ET between the Big Red and Friars.