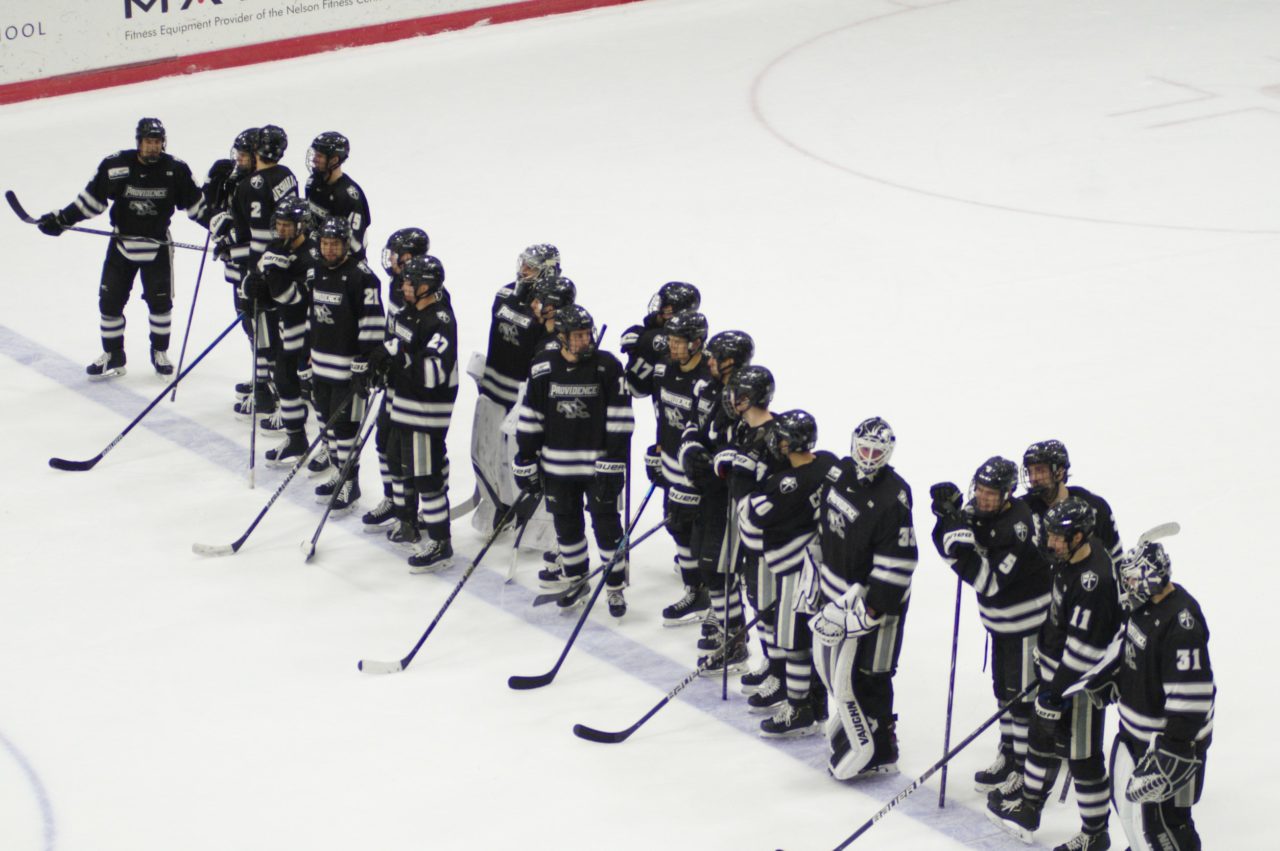 Providence, RI — On St. Patrick’s Day, the Providence Friars nearly ran out of luck. Nate Leaman’s squad fell in a decisive Game three to Boston College 2-1 and sat on the wrong side of the bubble. PC sat and watched anxiously as the bracket sorted itself out.

After the conference banners were awarded, Providence breathed a sigh of relief knowing they would be in the dance and possibly a few miles from home at the Dunkin Donuts Center. That happened, albeit the Friars were tasked with facing the WCHA Champion Minnesota-State Mankato Mavericks.

Early on Saturday afternoon, that task appeared too daunting for Providence to overcome. An early goal was waived off against PC and Mankato capitalized. Wyatt Aamodt buried Greg Printz into the ice and allowed a Mankato rush. Marker Tuomie took a Marc Michaelis pass and fired it on Hayden Hawkey, who made the initial save. Charlie Gerard jumped on the rebound and punched it in for his second goal of the season and a 1-0 Mavericks lead.

Thirty-six seconds later, Jake Jaremko punched one in and doubled the lead. Nick Rivera finished the scoring bonanza with a solo backhander and Mankato scored three goals in 3:16 of game time.

Providence pushed back with the aid of a power play. Josh Wilkins found twine off a perfect tic-tac-toe man advantage 2:04 after falling behind 3-0 and showed fight. Mankato nearly had a killing blow when Gerard had his second of the game late in the opener, but officials reviewed the call and blew called the play back. The Friars graciously accepted and scampered back to the locker room to regroup.

PC emerged ready to go and flipped momentum their way in the second period. Only 4:37 into the frame, Vimal Sukumaran wired a shot inside the left post to cut the Mav lead in half. Shortly before the frame’s mid-point, Ian Scheid took a holding the stick minor and gave Providence a chance on the man advantage. They capitalized. Kasper Bjorkqvist screened Dryden McKay in front and redirected a puck through for the equalizer.

Mankato pressured Hayden Hawkey with nine and eleven shots in the final two periods, but could not crack his armor. Meanwhile, Providence capitalized on another man advantage in the third. This time, Connor Mackey drilled Sukumaran and leveled him into the ice. The sophomore from Tower Lakes, IL, left with a major for contact to the head and a game misconduct.

Providence followed with two similar looking goals on the man-up. First, Tyce Thompson finished Josh Wilkins and Brandon Duhaime passes to give PC the lead 8:37 into the finale. Only 1:18 later, Wilkins capped Duhaime and Thompson passes for his second goal of the game. Mankato pulled McKay from the net for the final minutes, but Jason O’Neill sent the partisan crowd home happy with a 6-3 Friar win with six unanswered goals after trailing 3-0 early.

” The push we had in the third period was a decent one, but we couldn’t find a way to kill the penalty so they get to move on,” commented MSM Head Coach Mike Hastings. “In the second period, I thought they imposed their will on us, and we started playing passive. We didn’t play with the same aggressiveness whether it was with the puck or without the puck. Not real decisive in groups of five.”

The Friars expressed gratitude for the hosting situation.

“We’re happy to be here, happy that Brown is hosting, they do an unbelievable job hosting this” said Nate Leaman. We’re happy for the city of Providence, we’re happy they’re selling beer at the games. We’re happy that hopefully we get some fans here tomorrow, whoever we’re playing.”

Hayden Hawkey, PC’s record holder for wins by a goaltender, stopped 31 of 34 shots.

The Friars face the Cornell Big Red on Sunday afternoon. The winner advances to the Frozen Four in Buffalo. Puck drop is 4 pm ET at the Dunkin Donuts Center.