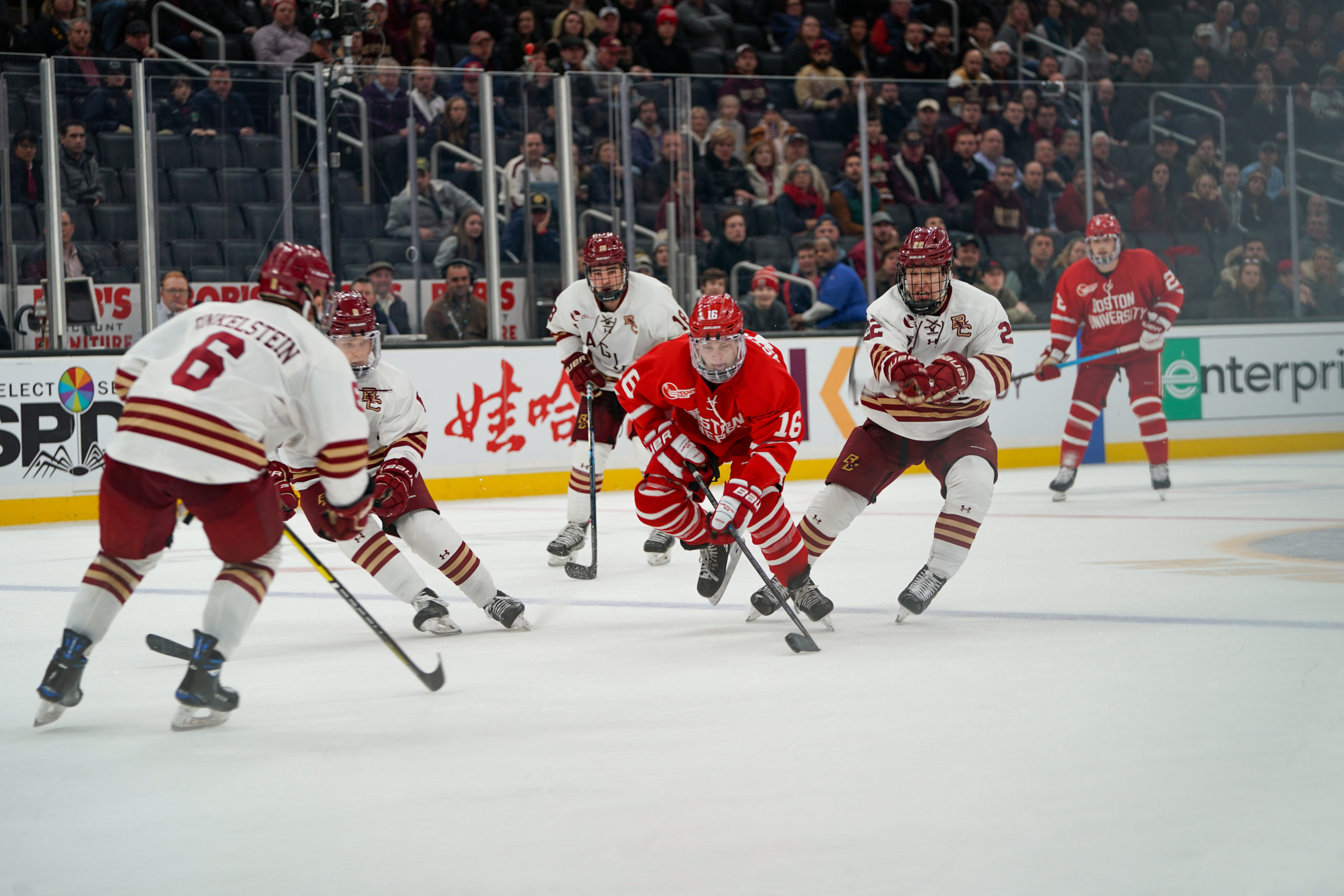 Robert Mastrosimone attacks the BC defense in the Beanpot. Credit- Julia Monaco

Boston- Across their decorated histories, Boston University and Boston College have a combined 50 Beanpot championships. The Terriers and Eagles renewed acquaintances on TD Garden ice for the 45th time and first since the 2017 Beanpot. The arch rivals combined for another memorable matchup that ended differently to any previous matchup thanks to a recent NCAA rules change.

Boston College jumped off the blocks early in the game. Just 2:15 into the game, Marc McLaughlin set up Patrick Giles from behind the net for an Eagle lead on the first shot BC attempted. About five minutes later, David Farrance took an ill-advised tripping minor. On the ensuing power play, Alex Newhook doubled the lead on a beautiful roofer. BU got off the mat with Captain Patrick Curry cutting the lead in half near the frame’s mid-point. The score held at 2-1 into the intermission.

The majority of the second period felt more calm than the opener. BC controlled the play, outshooting BU 15-9. Mid-season addition and Freshman Ashton Abel held his own in the BU net until a wildly unfortunate bounce late in the period. BC’s David Cotton got to a puck in the slot and shoveled the puck toward Abel who made the save. The puck then bounced to and off Alex Vlasic’s skate and into the net for an Eagle goal. Cotton was rewarded with his 11th goal of the season and BC was rewarded with a 3-1 lead at intermission.

Period three lifted this duel to Beanpot legend status. For much of the frame, BC kept BU off the board and allowed little to pressure Spencer Knight. The Eagles appeared poised for the kill late with a power play. Yet with Logan Cockerill sitting in the box, Luke McInnis took an interference minor to give BU life. On the ensuing four-on-four skating time, David Farrance cut into the lead for his 12th goal of the year. Then on the power play, Patrick Harper tied the game off a slick Farrance feed.

While the BU fans danced in the stands, the Terriers weren’t done. With 1:42 left in the game, Trevor Zegras delivered a picturesque strike to a cutting Robert Mastrosimone for BU’s first lead of the game. Through it all, BC had an answer. Knight hit the bench for an extra attacker and Curry took a hooking minor. On the ensuing six-on-four play, David Cotton sent the Eagles fans into a frenzy with the equalizer only 58 seconds from the end of regulation. The goal was his second of the game and 12th of the season. From here came a new wrinkle thanks to NCAA rules.

From the inception of the Beanpot, the tournament has featured continuous overtime, similar to National Tournament games or NHL Playoff games. However, the NCAA changed the overtime rules to standardize non-conference games in 2018. Teams would play five minutes of five-on-five overtime and if no goal were scored, the game would end in a tie. The Beanpot overtime rules changed to accommodate the NCAA’s new OT stipulations and that exact scenario happened. For purposes of record and the pairwise standings, BU and BC played to the first tie in Beanpot history, a 4-4 final. However, since there was a trophy to decide, the zambonis dusted off the ice and prepared for a second overtime, this one a full 20 minute session. None of the stats from after the 65 minute mark are recognized by the NCAA for addition to the season totals.

BU controlled the pace of the  full-timed overtime, outshooting BC 5-2. At the 7:20 mark of the game, second half addition Wilmer Skoog jumped on a free puck in the slot and ended a classic between the rivals to send BU to the championship game next week. Again, for Beanpot purposes, the Terriers won 5-4 in double overtime. But for NCAA purposes, the Terriers and Eagles finished tied 4-4.

Eagles Head Coach Jerry York summed the night up as “A really well played game between Boston University and Boston College”. He added, “We took an unnecessary penalty that gave them life. If you learn anything from this game tonight, you can’t take penalties late.”

Spencer Knight stopped 31 of 36 shots, though the NCAA will only recognize 27 saves and four allowed goals in 65 minutes of play.

The Eagles face #14 UMass Lowell in an enormous Hockey East matchup on Friday night at 7 pm ET at Conte Forum. BC returns to TD Garden to face the Harvard Crimson in the Beanpot consolation game next Monday afternoon at 4 pm ET.

“That was a pretty wild game,” commented BU Head Coach Albie O’Connell. “Huge win for the team. I’m happy for the seniors and the leadership group and looking forward to playing the championship game next week.”

Ashton Abel recorded 37 saves, though only 35 of them will be recognized by the NCAA for his season total thanks to the overtime rules.

Wilmer Skoog’s goal was his third of the season and second overtime winner. Yet it will not be counted towards his season total by the NCAA thanks to the overtime rules in place.

BU faces Merrimack at Agganis Arena on Friday night at 7:30 pm ET. The Terriers return to Causeway Street on Monday, February 10th to face the Northeastern Huskies for the Beanpot Championship. Puck drops on the Terrier’s 54th Beanpot Title game at 7 pm ET at TD Garden.