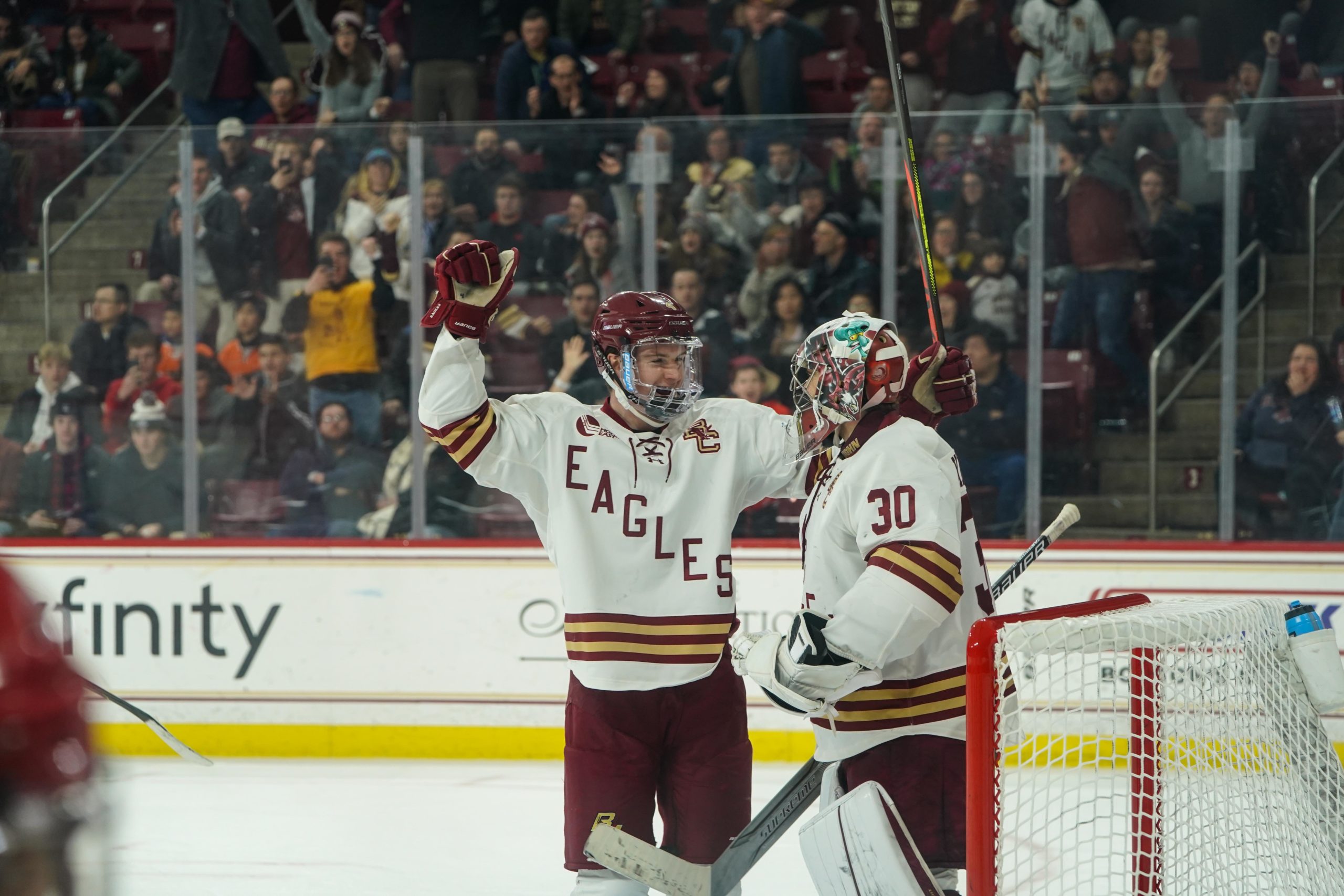 BC Victorious in Heavyweight Duel vs BU

Chestnut Hill, MA- Boston College and Boston University have written the record books in college hockey for over a century. Their rivalry is the best the sport has to offer and Saturday night offered an emphatic reminder. With snow falling on Massachusetts, the Eagles and Terriers renewed acquaintances with a marvelous showing at Conte Forum.

The hosts broke the ice with a Logan Hutsko breakaway and snipe over Sam Tucker nine minutes in. BU didn’t waste much time responding. With 3:50 remaining in the frame, Terrier alternate captain Patrick Harper ripped a shot over Spencer Knight’s shoulder for a tie game. Shortly thereafter, BC found a fortunate bounce from a previously unexpected place.

Freshman Mike Hardman hails from a BU family. His grandfather, Robert Sylvia, played 77 games for the Terriers from 1962-1965, scoring 34 goals and 30 assists for 64 points. In fact, Sylvia was the Captain of the Terriers in 1964-65 who won the ECAC’s Regular Season Title that year and played against current BC Head Coach Jerry York. When Mike’s turn to attend college came 54 years later, Hardman surprised his family and York by committing to BC. In his first outing against his grandfather’s school, Hardman threw a wraparound in front of the net and the puck ate up Sam Tucker for the Hanover, MA, native’s 6th goal of the season and a 2-1 lead before intermission.

The pace was calm in the early sequence of the second, despite the plethora of checks, pushes, and shoves. Conte had no home goals to cheer about and one road goal to groan at. BU Captain Patrick Curry tied the game with a beautiful ripper near the period’s mid-point.

The game appeared destined for overtime until BC got a fortunate bounce. Julius Mattila intended on passing a puck across the slot. David Farrance dove in anticipation. Mattila passed it and hit Farrance’s backside. The puck fluttered off Farrance and over Sam Tucker into the net for the go ahead tally in a fit of horrid BU luck. The Terriers pressured Spencer Knight, but were unable to crack Knight for one final goal. Conte Forum exploded in jubilation as BC secured a 4-3 victory, their first home win over BU since January 15th, 2016.

▶️ A great night on the Heights, and a BC win over BU#WeAreBC🦅 pic.twitter.com/KbyuowjXYQ

“I thought overall, we had a good weekend,” mused Head Coach Albie O’Connell after a road win at Merrimack Friday night and a narrow loss on Saturday. “We’ve gotta take the positives and move on. Ninety percent of the time we played well. We’ve gotta shave that ten percent down. We said before the third period, the team that makes the mistake is going to lose the game. We turned the puck over, they went the other way with it.”

“When you get two teams like this, the rivalry, the sold out building, the enthusiasm, even Todd (Angilly)- the Bruins National Anthem Singer, everything was to a T,” commented Head Coach Jerry York. “And when the home team wins after that, it makes it even more special. They’ve (BU) got a very good club. And I think down the stretch, they’re going to be extremely dangerous with their personnel.”

BU and BC next play in the Beanpot’s opening round on Monday, February 3rd. Puck drops at TD Garden at 8 pm ET.