Albany, NY- The St. Cloud State University Huskies entered Albany with poor recent NCAA Tournament history. Four straight Tournament losses, including a pair as the NCAA Tournament’s top seed to Air Force in 2018 and American International College in 2019 marked the Huskies record. Brett Larson’s staff walked into New York’s capital to face down Commonwealth Avenue’s teams and put the past behind them. Saturday saw a win over Boston University and Sunday provided the chance for a Frozen Four against the Boston College Eagles. They completed their mission.

BC did the first tally when Matt Boldy potted his 11th goal of the season. Otherwise, the opening frame was even at 11 shots a piece and both teams leaning on their goaltenders.

St. Cloud flipped the script dramatically in the second, outshooting BC 20-7. It didn’t appear headed that way early. Partly, the pace was choppy. The net behind BC goaltender Spencer Knight was dislodged five times by the first six minutes of the second. Fans cried foul, believing Knight intended on it. Knight and the staff complained to the officials and maintenance staff about the “pegs not being what we were used to,” as Eagle Head Coach Jerry York put it. He added that “…it should be addressed.” Albany will be hosting a hockey regional next season.

The mood also changed dramatically when longtime senior Easton Brodzinski left the game under his teammates’ arms late after being injured. He remained with medical staff after the final buzzer and Head Coach Brett Larson could provide no update on his exact condition. Larson explained that “I could hear on our bench, guys saying ‘Let’s play for Easton’”. The Huskies responded with an offensive outburst. 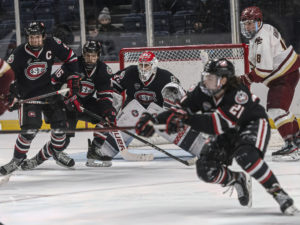 Warroad, MN, native Luke Jaycox started the Husky scoring by cleaning up a rebound off Spencer Knight’s pads at the right dot. His first goal of the season came at the perfect time. Will Hammer went next with a punch-in on a scramble in BC’s crease.

Anchorage, AK, native Nolan Walker drove the period’s last score and its weirdest. With 44 seconds left, Walker took a solo attack to Spencer Knight and hit the Darien, CT, native as the puck went in simultaneously. Originally, the play was ruled as a penalty against Walker and no goal. The officials reviewed the call and determined that the puck crossed the line one frame before Walker hit Knight. The result was that Walker still had to serve a minor for charging the goalie, but he was awarded his ninth goal of the season for his troubles.

St. Cloud played their 1-2-2 defensive scheme to perfection in the final frame and limited BC to only nine shots on net in the final 20 minutes. None of them beat David Hrenak, who stopped 26 of 27 shots for the night. Micah Miller capped the night with an empty net goal to secure a 4-1 St. Cloud win and the program’s second trip to the Frozen Four.

The All Tournament Team included BC forward Matt Boldy, St. Cloud Forwards Easton Brodzinski and Nolan Walker, Husky defensemen Nick Perbix and Luke Jaycox, and SCSU goalie David Hrenak. For stopping 60 of 63 shots in the two games for a .952 save percentage, Hrenak was honored as the Region’s Most Outstanding Player. 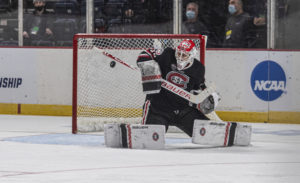 David Hrenak makes a save in the 2021 Albany Regional Final against Boston College. Credit-Robert Simmons

“I’ll take a .952,” exclaimed Larson. “I thought David saved his best hockey of the year. I felt comfortable the way he looked in the net.”

Boston College completes their season with a 17-6-1 record.

Michael Karrow is the only senior graduating from the Eagles team this season. Logan Hutsko would’ve been the other but he departed the team before the season could be completed. The two helped BC win three Hockey East Regular Season Championships in their time in the Heights. Much of BC’s remaining talent will return and take another run at glory in the 2021-22 season.

St. Cloud improves to 19-10-0 on the season. The team clinches the program’s second trip to the Frozen Four and first since 2013, which was also held in Pittsburgh.

On his team’s neutral zone performance, Larson explained that “We did the same thing we normally do but we did it better than we normally do. It was our normal 1-2-2 and obviously we thought that was an important part of the game.”

This will be St. Cloud’s first trip to the Frozen Four as an NCHC team.

The NCHC has had a representative in every Frozen Four since forming in the 2013-14 season and makes it five years with multiple participants. Minnesota-Duluth is making their fourth consecutive Frozen Four appearance after surviving their five overtime thriller against North Dakota.

The Huskies will be one of three Minnesota teams going to Pittsburgh. They look for their first Frozen Four win against the Minnesota State-Mankato Mavericks, who are making their debut appearance.

The second Semi-Final will be Minnesota-Duluth against Massachusetts, a rematch of the 2019 National Championship Game.

The semi-final games will be on Thursday, April 8th, at PPG Paints Arena in the Steel City. Puck drops will be 5 pm ET for the SCSU-Mankato matchup and 9 pm ET for the Duluth-UMass game