Albany, NY- Before the 2021 NCAA Hockey Tournament, St. Cloud State and Boston University were unfamiliar foes. The two had only met once before, in the 2000 Albany Regional Opening Round. The Terriers won that matchup 5-3. On Saturday afternoon, BU and St. Cloud met after 21 years apart and combined for a spirited and eventful afternoon at the Times Union Center in New York’s Capital.

St. Cloud completely controlled the opening 20 minutes. The Huskies outshot BU 14-10 for the period and near the half mark the total was 14-4 for SCSU. Drew Commesso stood tall in the first, stopping all shots his way, including nine generated on a major power play. That penalty was a hitting from behind minor on Dylan Peterson for a hitting from behind penalty.

The scoring opened up in the second. BU drew first blood when Wilmer Skoog put a backhander over David Hrenak eight seconds into the frame for a 1-0 BU lead. The officials reviewed the call for a possible offsides, but held up the original good goal call. St. Cloud found the equalizer in a bizarre manner. Nolan Walker popped the puck into the air and it fluttered over the net and to Micah Miller in the offensive slot. All players on the ice except Miller, including Commesso in net, was turned the wrong way, believing that the puck was still behind the net. Miller gathered the puck and wired it home to tie the game. 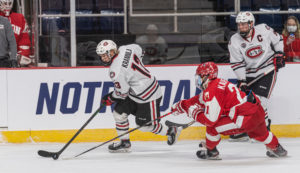 The funky bounces continued to benefit St. Cloud. BU couldn’t clear a puck because it hit an official’s posterior. Nick Perbix corralled the puck and fired it home to put St. Cloud ahead 2-1. BU answered on a power play. Jake Wise wired a puck off the pipe and in for his first of the season to tie the game at 2-2. But St. Cloud had one more response. Senior Easton Brodzinski potted his 12th goal of the season 32 seconds after BU’s tally to put St. Cloud ahead 3-2 going into the intermission.

The third period offered yet more strange turns and more St. Cloud good fortune. It didn’t appear going that direction at first. Chase Brand let his elbow fly too high and hit a Terrier in the head. He subsequently was sat for five and a game. But on the ensuing power play St. Cloud sophomore Jami Krannila forced a turnover and drove to the attacking end. Logan Cockerill dove to prevent a shot. The BU captain was whistled for a tripping minor and a Kranilla was awarded a rare penalty shot. The Nokia, Finland, native beat Drew Commesso for the first St. Cloud penalty shot since 1992 and a 4-2 lead.

“I didn’t think I would get a shot,” commented Kranilla. “Coach asked me. I was lucky he did, they almost decided to waive it off.” As for his move, Kranilla explained that “I saw Easton (Brodzinski) make the same move in practice a hundred times. So I thought I would take the same shot and it worked.”

Terrier Head Coach Albie O’Connell said of the call “It looked like a good play by our guy. I understand the trip. I didn’t understand the penalty shot but that’s not for me to decide. You’ve gotta tip your hat. That was the turning point of the game.”

The Huskies completed the major kill and caught a breather when the glass and a portion of the board broke in the corner. Easton Brodzinski added on another goal to put BU deeper in the hole that was reviewed for a potential kick, but held up to extra official scrutiny. Veeti Miettinen capped the scoring in the final five minutes to wrap the game up at 6-2 for the Huskies.

BU ends their season with a 10-5-1 overall record.

“Congratulations to St. Cloud for moving on. They’re on the good side of it tonight,” said O’Connell. “They’re a good team. And I think Lady Luck was on their side.”

St. Cloud improves to 18-10-0 with the program’s first NCAA Tournament win since defeating Michigan Tech 3-2 in overtime of the 2015 Fargo Regional’s opening round.

Easton Brodzinski recorded two goals for his third multi-goal game and fourth multi-point game of the season. Jami Krannila recorded a two point game with his penalty shot goal and an assist.

“I was proud of the team,” commented SCSU Head Coach Brett Larson, who won his first NCAA Tournament game as ahead coach. “They came out played hard right away. They played through some adversity. Obviously BU is a great team and it took everything we had to get the win.”

“…we had been in a one goal game a week ago in the League Championship game,” added Larson. And we wanted to stay in attack mode, we didn’t want to stay on our heels.”

St. Cloud will face Boston College in the Regional Final on Sunday night to determine who advances to the 2021 Frozen Four in Pittsburgh.