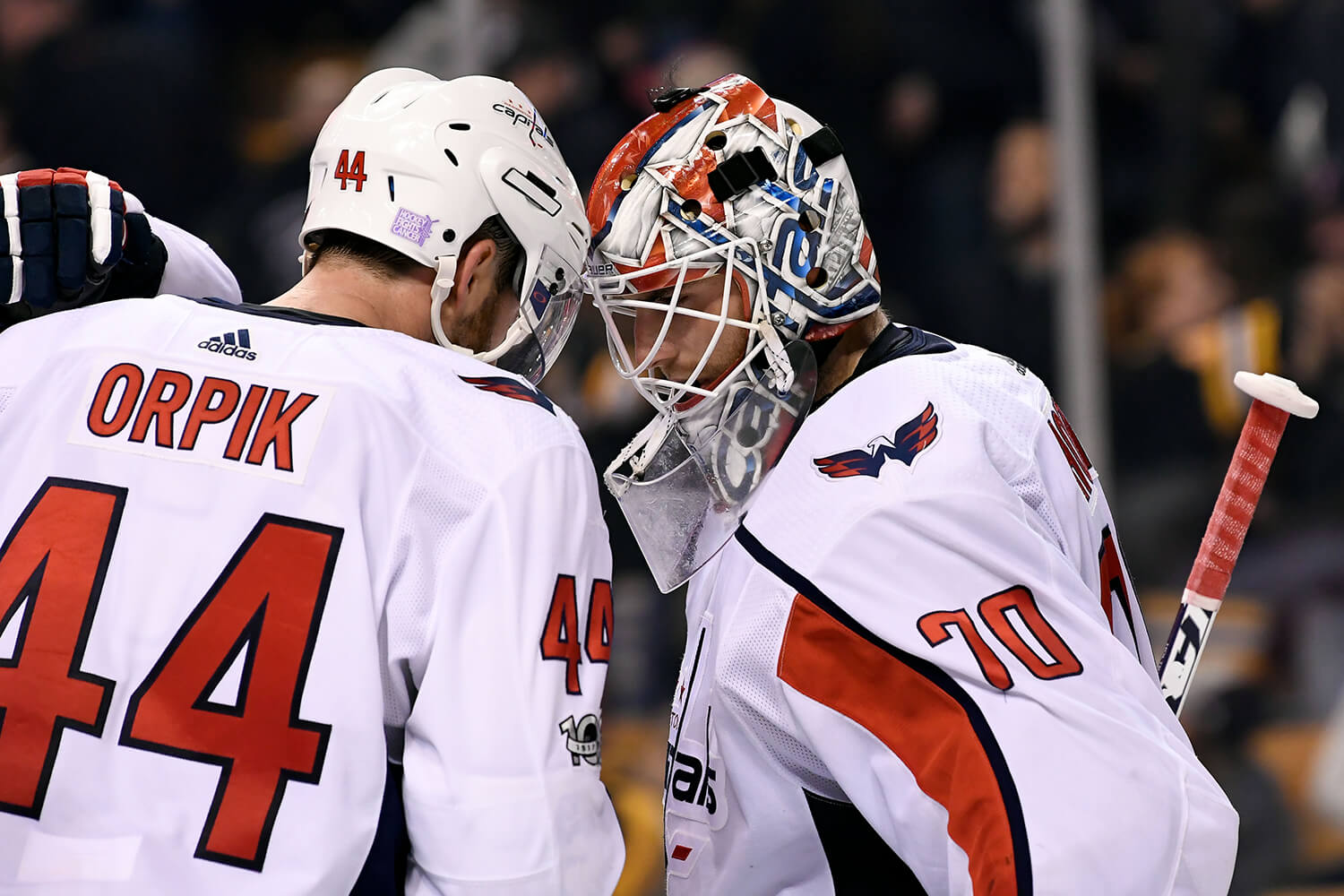 Metro Division in Free Agency Part I: The Quiet Ones

Not only did the St. Louis Blues title help end the franchise’s 52-year Cup drought, it also returned the Stanley Cup to the Central division, regular keepers of it during Chicago’s three in six modern day dynasty.

The Metro, which occupied it from 2016-2018, saw its reign end when the Hurricanes, perhaps the most unlikely of teams to contend for the four-pete, fell in a four-game sweep to the Bruins in the Eastern Conference Finals. Free agency, which has long burned teams before, has still managed to remain a frequented route for teams to try and plug holes and restructure their roster. And, with what is an above-average class of UFAs and RFAs, there’s reason to believe the division, without a true slouch could figure prominently in the frenzy.

This year’s group is highlighted by the restricted free agent crop, which includes some elite-level talent on teams with significant cap crunches. Among them: Brayden Point, Tampa; Andreas Johnsson, Kasperi Kapanen and Mitch Marner, Toronto; William Karlsson, Vegas; and Kyle Connor and Patrik Laine, Winnipeg. They are enough to have even the long-time hockey executives pondering the door down a long, dim-lit hallway that reads: “Offer Sheet.”

Meanwhile, the UFA class can boast a change from its usual mediocre group, sprinkled with some reliable adds, to the latter with some legitimate talent. A top-six winger? Check. A minute-eating offensive defenseman? Yep. How about a playmaking-center, who scored almost a point-per-game? That, too. One more: you don’t suppose you have a goaltender that can handle 50 or so games? I’ll do you one better, we’ve got one that can do 60-65. Kids, put your shoes on, we’re going shopping!

The Penguins and Capitals are trying to flex their cap management muscles–both have made moves to clear some space, Pittsburgh sending Olli Maatta to Chicago; and Washington swapping defense with the Flyers. The rest of the division though has money to spend.

Elsewhere, both the Rangers and Philly, two of the league’s long-standing July 1 victims, north of $17 million to toy with. The Islanders, who saw franchise face, John Tavares exit on July 1, have more than $20 million to use under an ownership group that’s eager to do so. Tom Dundon and the Hurricanes should be eager to utilize some of their $20+ million as they try and keep the Bunch of Jerks as regular playoff contenders after a fun ride.

The Blue Jackets and Devils are among five teams in the league’s basement. They’ll have to spend to reach the cap floor, both with more than $25 million in space.

The Metro offers an array of things other divisions simply cannot including lighter travel and more U.S. exposure (Ovechkin and Crosby help a lot). So, what kind of free agency might the eight members of the Metropolitan division have? Let’s explore. Numbers and free agent info via my offseason pal, CapFriendly.

Outside of Marcus Pettersson, who came on the scene from Anaheim in a December deal for Daniel Sprong, the Penguins don’t have a ton of must-sign players internally. Still, with a little under $3.9 million in available cap space and Matt Murray’s deal expiring at the end of next season, there’s little reason to expect the Pens to be a buyer this July. New Hall-of-Famer, Jim Rutherford, who will enter his sixth season as general manager, helped deliver two more Cups to the Sidney Crosby-Evgeni Malkin era, but following an early playoff exit–he’s not pleased. On a Wednesday radio hit with TSN 1050 Toronto, he was very honest.

“We’ve got a lot of things going on with the Penguins right now,” Rutherford said. “Our players got a little too content and we’re looking to make changes…Whoever ends up getting moved, we just need to come in with a new look.”

Rutherford has always been a proactive executive and this summer has appeared no different. He tried to move Phil Kessel to the Wild earlier this month for a package that included 27-year-old winger, Jason Zucker. When Kessel vetoed the trade, utilizing his modified no-trade/move clause in his contract. While Kessel, for the ninth-straight season, dressed for every game this season, he’s another north of 30-year-old topping the club’s payroll along with Crosby and Malkin. Crosby is untouchable. Malkin, is pretty close to that, but could be moved for the right deal–but it would take a major haul. Given Wednesday’s comments, one has to wonder if Kris Letang is a name worth considering. He’s 32 and has had trouble playing a full season, but is an intriguing option for some teams. Not sure the Penguins would want to eat part of his annual salary of $7.25M with three years remaining. There’s a big-time appetite for change in the Steel City.

They did manage to ship close to $4 million when they dealt Olli Maatta to the Blackhawks two weeks ago. And that figures to be the best way Rutherford is going to reshape his roster–the trade market. The good news? As the roster stands today, the club still seems poised for a return to the postseason. They’re also coming off a well-praised draft that saw them select Samuel Poulin, a strong playmaking winger out of the QMJHL, with the 21st overall pick. Prior to last week, the club hadn’t picked in the first round since 2014 (Kasperi Kapanen).

Market Mentality: Quiet on the FA market; could be noisy on the trade front

For the Capitals, it comes down to two things: One, take care of a decent crop of restricted free agents (none of which should break the bank); and two, whatever decision is made probably has next summer in mind.

On Tuesday, the Capitals announced that they would be qualifying almost all of their RFAs. Dmitri Jaskin, who netted 8 points in 37 games, was not tendered and can pursue free agency next week. Andre Burakovsky, Washington’s first round pick in 2013, was among the more interesting names the club opted to retain following a difficult season. In 76 games, he collected the same number of points (25)  he had a season ago in 20 less games. General Manager, Brian MacLellan spoke about Burakovsky on a pre-draft conference call.

“Andre had a frustrating year this year,” he said. “But I think he finished it up well I think from the trade deadline on… I thought he had a good playoffs. We like the player. There’s been some inconsistencies there, but when he’s on his game he’s a good player. We’d like to keep him around. Obviously, his name is out there a bit, so we do talk to some teams on him. We’re not going to move him unless we get something we feel comfortable with back.”

Though he’s been the trade subject for some time, the club opting not to move him at the Draft and qualifying him is a positive sign. The 24-year-old made $3 million last season and might be wise to take the qualifying offer and try to find some consistency.

Jakub Vrana, 23, is coming off a year in which he established career high’s in every statistical category nothcing 24 goals and 47 points in 82 games. He’s due for a healthy raise from his entry-level deal. @EvolvingWild projects an AAV of $3.1 million for the winger.

Alright everyone! We’ve made (what we hope to be) the last round of updates to our contract projections for the 2019 NHL free agent class. Unless something is discovered that is clearly broken, these will not change. Have fun! https://t.co/gVZYSBFJHB

Also of consideration is next summer’s pending UFAS, Nicklas Backstrom and Braden Holtby.

“Obviously, they’re both a big part of the team and a big part of what we’ve accomplished so far,” he said. “As the summer goes on, we’ll talk to both of those guys about the future and how we see it playing out.”

That could keep the level of market activity low for the Caps, who might have to let Brett Connolly and Devante Smith-Pelly walk. Pending UFA, Brooks Orpik announced his retirement on Tuesday.

Oh and by the way,  Ovechkin can discuss an extension one year from now. So there’s a lot looming ahead as Washington, again a Cup contender, tries for another title after going down in OT of a seven-game first round series with the Hurricanes. Don’t expect flashy signings. They have some flexibility after trading Matt Niskanen, to not be completely muted this offseason.

We’ll soon see how Chuck Fletcher’s first free agency with the Flyers goes. Philadelphia, who has handed out big money to Daniel Briere, Ilya Bryzgalov and Vincent Lecavalier, among others only to see them moved out or bought out. In Minnesota, Fletcher was responsible for the biggest signings in the franchise’s history–a pair of 13-year, $98 million dollar contracts for Zach Parise and Ryan Suter. Though useful players, they each have six more seasons left at $7.5 million AAV. The deals, which were largely front-loaded, don’t begin dwindling in salary until 2022-23.

The deals get more grief today given the state of the Wild, a team that should be trying to build themselves back into playoff contention with a young core, but has an average age of almost 30. Ultimately, the problems in Minnesota led to Fletcher’s departure a year ago. Today, his Flyers have an average age of 26.7 and parts of its core including Sean Couturier, Claude Giroux, Jakub Voracek and Shayne Gostisbehere signed to until at least 2022. They boast a young, mobile blue line and a solid collection of youth forwards including former second overall pick, Nolan Patrick and 2018 selection, Joel Farabee, who signed an entry-level deal after a season at Boston University.

The Flyers have already had active summer shipping out Radko Gudas and Ryan Hartman and bringing in Justin Braun, Matt Niskanen and Tyler Pitlick. Prior to the end of the postseason, they acquired the rights to and signed pending UFA, Kevin Hayes to a seven-year, $50 million contract. Even with an additional $18 million on the club’s payroll, they find themselves in a rather comfortable position. Travis Konecny and Ivan Provorov should combine for about $10 million. That should leave the Flyers with enough room to try and add a bottom-six forward to challenge some of the kids for a spot and veteran netminder to share the crease with second-year keeper, Carter Hart. Besides that, the offseason, at this point, might be quiet for Philadelphia.