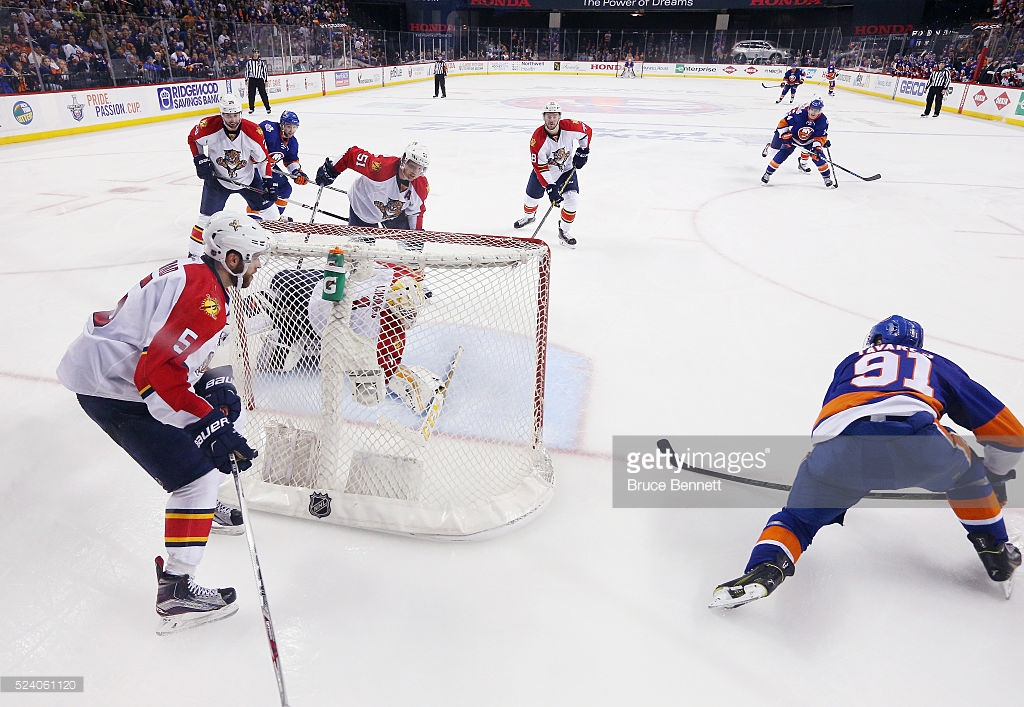 in Game Six of the Eastern Conference First Round during the 2016 NHL Stanley Cup Playoffs at the Barclays Center on April 24, 2016 in the Brooklyn borough of New York City. The Islanders won the game 2-1 in double overtime to win the series four games to two.

After spelling a 23-year drought of winning a playoff series, the New York Islanders will open their semi-final match up at Tampa on Wednesday, an indoctrination if there ever were, that the Isles’ are no longer for fodder.

Fittingly, it was their leader–captain John Tavares who scored the game-tying goal with a shade under a minute left in regulation. Then, at 10:41 of the second overtime he scored again, this time clinching the series four games to two over the Florida Panthers.

For all the success this season and beyond, rebounding in the post-season after an emotional seven-game series with the Washington Capitals a year ago, it still feels like yesterday that the Islanders were the laughing stock of the National Hockey League. A team stuck in a leaking building, whose old barn was beginning wear thin. Even the memories of four Stanley Cups did little to settle the realization, that something had to be done. Perhaps the worst part of the Islanders’ infrastructure though became its interior-assembling. Management, led by Mike Milbury and co., made the bold financial decisions like the New York Rangers, without the financial security blanket the Rangers used countless times to bail themselves out of gaffs.

And there were gaffs–a lot of them. Like the trading of future Hall-of-Famer’s, Zdeno Chara and Roberto Luongo. Moves that opened the door  to even further mediocrity, with long-term contracts eventually handed out to Alexei Yashin (10-years, $87.5 million) then Rick DiPietro (15-years, 67.5 million). By 2013 though, both players had performed so miserably that a cash-strapped organization found it more beneficial to pay them not to play for the Islanders. Yashin’s buyout ended in 2015, while DiPietro’s will run until 2029, when the former first overall pick (another gaff) will be almost 50 when his name comes off the books.

Former goalie and current GM, Garth Snow has done some good things lately–he’s held the line with players, such as Josh Ho-Sang, Brock Nelson and Ryan Strome. He traded himself from zero to two picks in last year’s first round of the entry draft, and has made good use of the waiver wire with additions like Thomas Hickey, Brian Strait, or the recently-traded Michael Grabner. But the start of his tenure was not without his share of questionable decisions.

Cal Clutterbuck’s trade to New York from Minnesota for Nino Niederreiter has a ways to go before it can be truly assessed, but as one continues to be an impressive part of an impressive fourth line, the other is a former fifth-overall pick, who is coming off a career-high 43-point season and might be closing in on a top-six role. What really makes that deal questionable isn’t Clutterbuck, it’s that the Isles were willing to trade a former top-five pick for such a low return.

And if there were ever an example as to the high price a former top-five pick would be, look no further than the Islanders of 2014–who traded Matt Moulson, a first rounder and second rounder for 2003 fifth overall draft pick, Thomas Vanek. Vanek was nearly a point-per-game player on Long Island, but when he turned down a long-term deal to stay in the blue and orange and the team limped to bottom in the NHL, Vanek was dealt to Montreal for an underwhelming package at the trade deadline. New York managed to avoid further embarrassment by deferring the first round pick from 2014 to 2015, allowing them to use another top-five pick, selecting Michael Dal Colle.

Yes, it’s the organization that was once owned by a con-artist. An organization that had more than a few nights of dismal crowds, putting the building’s eyesores further in mind. It’s a team that imposed one of the historically-worst jerseys in sports history. And now, its a team in a new, state-of-the-art building, which never intended on playing hockey–as is made evident by the giant SUV in the corner and obstructed seating. The punchlines of the late 1990’s and early-to-mid 2000’s came and went, about as fast as Islander coaches.

So, it must make it all the more rewarding now that it’s the New York Islanders who are moving on to the second round, while the Rangers contemplate their future, after their window for a cup may have closed. Equally satisfying is the fact that their captain, John Tavares has emerged as the best NHL player in the New York area–including Henrik Lundqvist. The consolation prize to an atrocious 2008-09 season, he’s the pulse of this team and will look to return them to the glory days–just as everyone hoped when he was selected first overall in 2009.

The task of taking on the Tampa Bay Lightning won’t prove to be any easier that dispensing their cross-state rival, Panthers. Young, speedy and strong in net, Tampa is a year removed from a Stanley Cup appearance, falling in six games to the Chicago Blackhawks. They were without key components including Steven Stamkos and Anton Stralman–but both could return during this series. A tough team without the two, eliminating the Red Wings in five, there’ll be no free games. The team that moves on to play the winner of Pittsburgh-Washington for a trip to the finals, will have to earn their place.

It’s the notion that the Islanders could be on the cusp of something special and truly remarkable that has seemingly ended the laugh track that accompanied the team. It’s almost as if they were trying to actually win. And if they do, fans will surely forget the unkind times and soak in the memories of more recent history, as they commute to Brooklyn.