And so ends another season without a Stanley Cup for Henrik Lundqvist and the New York Rangers, and perhaps the window for such prestige has closed.

The Rangers were eliminated in five games by the Pittsburgh Penguins on Saturday in a 6-3 drubbing that saw Lundqvist exit after allowing a season-high six goals through two periods. It was the 11th time this season the ‘King’ was pulled, and third time this series, including game one when he left after the first period with an eye injury.

Lundqvist, has been the backbone of the Rangers seemingly since his arrival in 2005-06, he’s been on record to say he wants to finish his career in New York and ultimately, bring the city it’s first Stanely Cup since 1994. But the door to that might have closed on Saturday. With a mess of picks and prospects surrendered in trades for ‘win now’ additions and some upcoming problems with the salary cap, the Rangers are at a crossroad. One which will prove to test the wits of first-year GM Jeff Gorton. 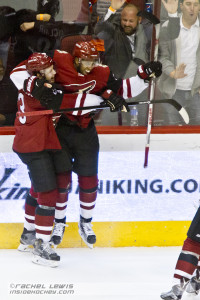 Since 2010, the Rangers have traded four first round draft picks, including this June’s as part of the Keith Yandle deal made last season. They’ve also parted ways with second round picks–like the two sent to Carolina in February for Eric Staal. The most notable subtraction for a ‘win now’ asset though has been Anthony Duclair, who was part of the package that went to the Coyotes in 2014. Duclair finished fourth in team scoring with Arizona, tallying 44 points in 81 games.

It’s not all gone of course, there’s Pavel Buchnevich, Ryan Gropp playing in Russia and junior hockey, respectively, there’s also Adam Tambellini and Ryan Graves, who played in Hartford this season. Brandon Halverson and Igor Shesterkin, two goaltenders, highlight the Rangers’ prospect pool, but remain projects, for now. None of their most notable prospects provide some safety net to continue squandering the future–especially as the salary cap becomes tougher to maneuver and free agency has produced slim pickings, as of late.

The Rangers in particular might find it difficult to spend much on the open market anyway. Twelve players are under contract next season to the tune of roughly $54.15-million in cap dollars. That doesn’t include multiple restricted free agents, namely Kevin Hayes, Chris Kreider, J.T. Miller and Dylan McIlrath.

The estimated $74 million salary cap next season leaves little room for the Rangers to be super flexible with contracts. So, pricey acquisitions including Eric Staal and Yandle are likely departing. Barring major creativity, it appears like the Rangers are on the cusp of a regression.

If anything, the five-game playoff defeat pin-pointed what is fundamentally wrong about the New York Rangers. A team that won 46 games en route to the post-season, yes. A team that has played a lot of hockey in the last six years, absolutely. But it’s also a team that in six years has changed before our eyes. 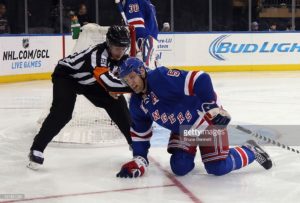 Girardi, 31, missed games two through four with an undisclosed injury.

The once stalwart defense led by the shot-blocking efficiency of Marc Staal and Dan Girardi has noticeably declined, becoming increasingly less mobile in a game that demands skating, speed and transitional defense. Captain Ryan McDonagh is 26 and has all the capabilities to be a number-one defenseman, including high hockey sense and a well-developed two-way game, but he alone can’t do it all. Kevin Klein was a nice add, as he provides some big minutes at cap friendly dollars, but maxes out on the second-pair. The team will rid themselves of Dan Boyle, who had a largely productive year despite occasional on-ice gaffs, reminding everyone that he turns 40 in July. If he doesn’t retire he’ll be somewhere other than New York (City) come October.

Up front, Rick Nash did show up, despite popular belief. His four points in five games was tied with Derick Brassard for the team lead. The team combined for just ten goals in the series and got underwhelming contribution from its secondary offense, including Eric Staal, who was held without a point in his first playoff series since 2009. A point-per-game player in 43 prior appearances, New York had much higher expectations for him.

The worst showing of them all though was in net, where Lundqvist allowed 15 goals through parts of 11 periods. Hockey has long dictated that scapegoating the goalie is unfair and given the hefty shot disparities it’s downright cruel, but the simple fact is, the Rangers relied heavily on their goaltender, again. And he faltered. Playoffs aside, he hasn’t shown a dip in his career, but will be 35 come this time next year. They can’t possibly continue to leave it all up to the ‘King’, can they?

If the window is still open for the Rangers, it’s just one soft spring breeze away from abruptly closing.

The Rangers ended the season on another dim note. It wasn’t nearly as deflating as the game seven shutout loss to Tampa a year ago, or the game five loss in double-overtime to Los Angeles in the Stanley Cup finals. But it offers the same level of solace internally.

It would be shocking if New York truly heeded to the concept of a rebuild. They still have talented pieces and for Lundqvist is at the top of that list–he’s got five years left on his contract. Perhaps the day will come when he is moved out for a chance at the cup, but there’s little reason to expect that day is soon.

The defense has to be a concern. Boyle and Yandle are unlikely to return to the blue and white, and that does take away from the production on the back end. Brady Skjei got a taste of NHL regular and post-season hockey and fit in nicely. His skating and handling of minutes was noticeable, but he’s not about to step into the shoes as an offensive defenseman. Replacing at least Yandle’s projection will be a top priority.

Deciding on Staal and Girardi will also prove to be a crucial decision, and one that might not be able to be made this summer. Both players have contracts that go beyond 2019 with cap hits north of $5.4 million. They also both include full no-move clauses. Trading either might prove to be too difficult, add the probable notion of salary retained and it’s next to impossible.

They could decide to buyout one of the two, but that would mean absorbing a cap hit of just under $2 million for the next eight to ten years.

The core up front of Nash, Brassard, Derek Stepan and Mats Zuccarello will remain in tact, all four have contracts into the 2017-18 season. They may have to cut adrift one of their pending RFA’s (Hayes, Kreider and Miller), but could fetch something valuable and inexpensive–like a draft pick and prospect.

Raanta is just 26 and performed admirably on the New York stage, a year removed from a bumpy ending with the reigning Stanley Cup champions. He’ll also be an unrestricted free agent and probably looking for an upgrade from his $750,000. Which might see him go elsewhere to get it, especially considering the emergence of Magnus Hellberg and Mackenzie Skapski.

The Rangers won’t pick until the third round of the 2016 NHL Entry Draft. That trend will have to stop if the Rangers want to develop a perennial contender. They have six selections in 2017 (including their first round pick) and all seven picks in 2018.

If those picks aren’t around come this time next season, then there is likely a major regression coming.