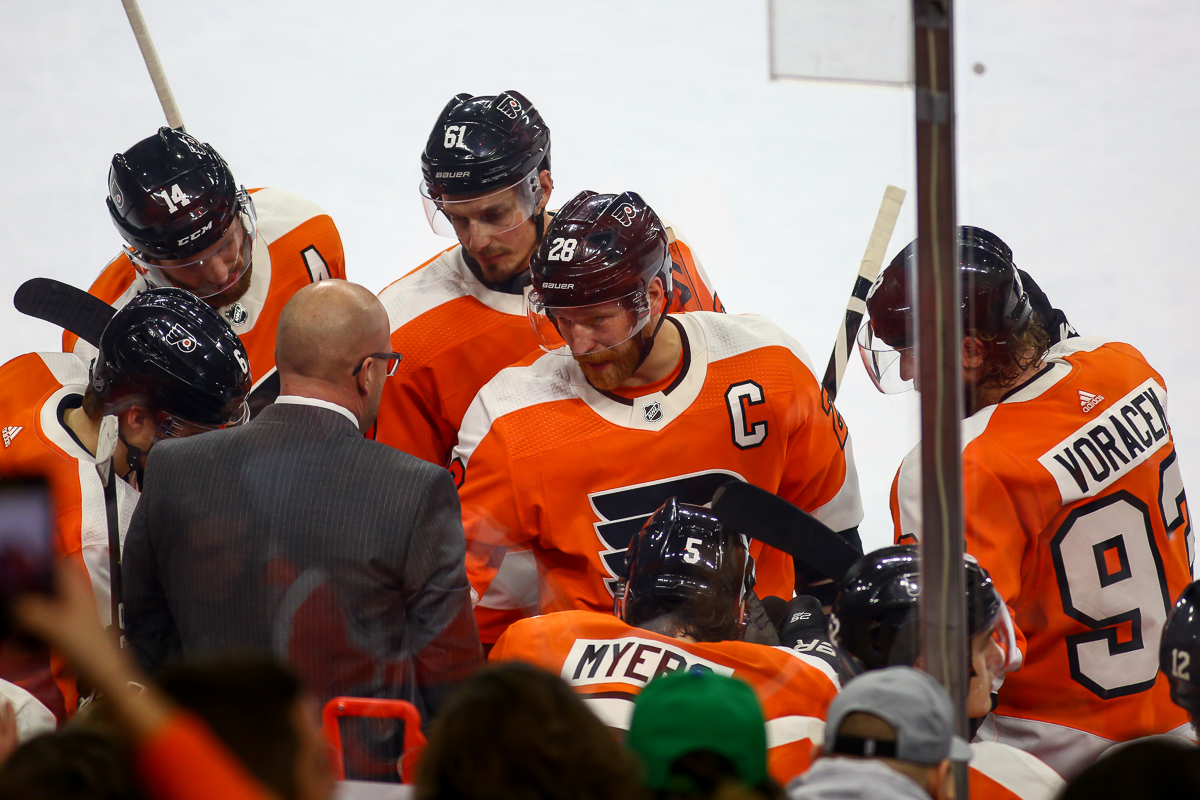 Members of the Philadelphia Flyers listen to instruction during a timeout

For the parties intimately involved in hockey’s return to play on Tuesday, it was the first glance at what the next two months will look and how the 2019-20 season will finally see its long-awaited conclusion. But in unprecedented times, finding anything universally familiar about the set-up also remains a rarity.

As you might expect, bubble life brings with it a certain protocol. After all, it’s 12 teams per hub utilizing one ice surface for competition while following the league’s schedule for regularly scheduled practices. And presumably, the hotel, where players will spend most of their time, is where team meetings and video will be reviewed and discussed. Though the league and NHLPA was praised by its players for providing a wealth of outlets to provide welcomed off-ice recreation, relaxation and distraction for players it’s never been harder to get away from the game after sixty.

At least as professional hockey players.

Of course, once upon a time there may have been some things that vaguely resemble the current routines of hub life. Maybe it was the bussing from the Royal York Hotel to Scotiabank Arena or maybe it was roaming the hotel lobby, surrounded by other team’s equipment bags. Perhaps it’s even the dressing inside a room that feels surreal–hello Montreal Leafs! But with all of the oddities for the largely 25-plus participants in the NHL’s restart, there are some levels of ‘it’s-sorta-like.’

“It reminds me a little of a minor hockey tournament,” Toronto’s Alex Kefoot said. “You’re there and staying in a hotel with a bunch of other teams. But we’re grown men now and obviously playing in the NHL. It’s got a different feel. This whole tournament is unique.”

“You know what it really feels like,” Hynes said. “It feels like a World Championship. You have a lot of the same teams in the hotel. The teams really aren’t hanging out or intermingling, but you’re going down to your meal room, there’s four others. You kind of see people in and throughout the hotel. There’s more of a buzz around the hotel because there’s so many people here and it’s hockey-related.”

Hynes, who has served on Team USA’s coaching staff for two World Championships and another 11 international tournament opportunities, is much like those tournaments, needing to do a lot in a potentially short period of time as the Predators battle the Coyotes in a best-of-five qualifying round series.

Fellow U.S. product and 22-goal scorer in the Desert, Conor Garland recalls some similarities from long before the days that got him to Arizona.

“I remember we used to go to a tournament in Rochester and everybody would walk around with their team pins on,” Garland said. “That’s the only difference–none of us have our pins on.”

Coyotes head coach, Rick Tocchet never saw the NHL quite like this in a career that’s been non-stop since 1985 as player and coach.

“I remember back in hockey tournaments,” he said. “All the team’s were staying in the same hotel. The only difference is I haven’t seen the guys playing mini-sticks in the hall yet. Maybe by day five guys will get bored and we’ll have a mini-stick tournament. It would be kind of fun.”

Wise words from a guy who gets it.

Elsewhere, the Flyers and Penguins debuted the restart with an exhibition contest that went the distance–a 3-2 OT win for the black and orange. The stakes about to get higher, but even a familiar opponent didn’t do too much in what looked and felt like an exhibition game, regardless of circumstance.

“There really wasn’t a lot of emotion in the game,” Flyers forward Sean Couturier said. “After the whistle, you usually see a lot of that between us. But at the same time, I think it was just because it was an exhibition game, not because there was no fans.”

It was the first display of how the NHL expects to pump some noise into games including crowds, music and goal horns for both sides.

“Once the game started we don’t really think about it,” he said. “You got a job to do and you just try and go out there and do your thing.”