In an exclusive interview with insidehockey.com, Kraken defenseman Dennis Cholowski discussed his move from Detroit to Seattle, thoughts on the NHL’s newest franchise and his personal improvement goals for the upcoming season. 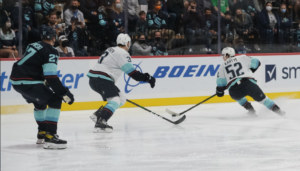 “It was an honor to play for the Red Wings for as long as I did,” Cholowski said of his time with Detroit. “It’s an Original Six and it was really cool. But, at the same time, I was excited to be picked here.”

The former Red Wing was selected by the Kraken in the 2021 NHL Expansion Draft. He signed a three-year entry-level contract with Detroit in the spring of 2017. Cholowski split playing time with the Grand Rapids Griffins of the American Hockey League and the Wings before moving on to Seattle. The British Columbia native notched seven goals and nine assists in 52 games while in the NHL.

“Detroit’s a new rink, too.” Cholowski said of Little Caesars Arena that opened in 2017 and serves as the home arena for the Red Wings and NBA Detroit Pistons. “Then, I came here. It was like ‘whoa.’ This (Seattle Kraken Community Iceplex) is pretty cool.”

“It’s a lot of skill on the ice, which is exciting to see,” he said after the Kraken’s first team scrimmage on Saturday. “I was just glad to be out there and get my feet moving a little bit and roll into pre-season.”

Video highlights from the Kraken scrimmage

Cholowski identified his goals, expectations and improvement areas in his first year with the Kraken. He’s striving for consistent play on offense and defense every night.

The full interview video with Cholowski is below:

END_OF_DOCUMENT_TOKEN_TO_BE_REPLACED

The Philadelphia Flyers defeated the visiting Colorado Avalanche by a score of 5-3 during regulation. In addition to the loss, the Avalanche lost Nathan MacKinnon to an injury sustained in the first period.