The Seattle Kraken welcomed media members and invited guests to the launch of the Kraken Community Iceplex. Insidehockey.com captured some sights and sounds from the event.

In an exclusive interview, Kraken CEO Tod Leiweke discussed on the location criteria and his collaboration with Starbucks to build the NHL’s newest practice facility. 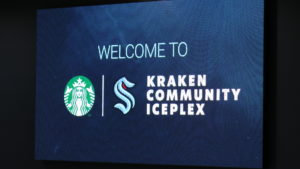 The complex will not only host Kraken practices but also a community building dedicated to growing hockey, figure skating and curling.

Leiweke and Camille Hymes, Starbucks VP US Community Impact, elaborated on their partnership. A key element of the relationship is the inclusion of a Starbucks Community Store inside the Iceplex that emphasizes economic development of underserved communities.