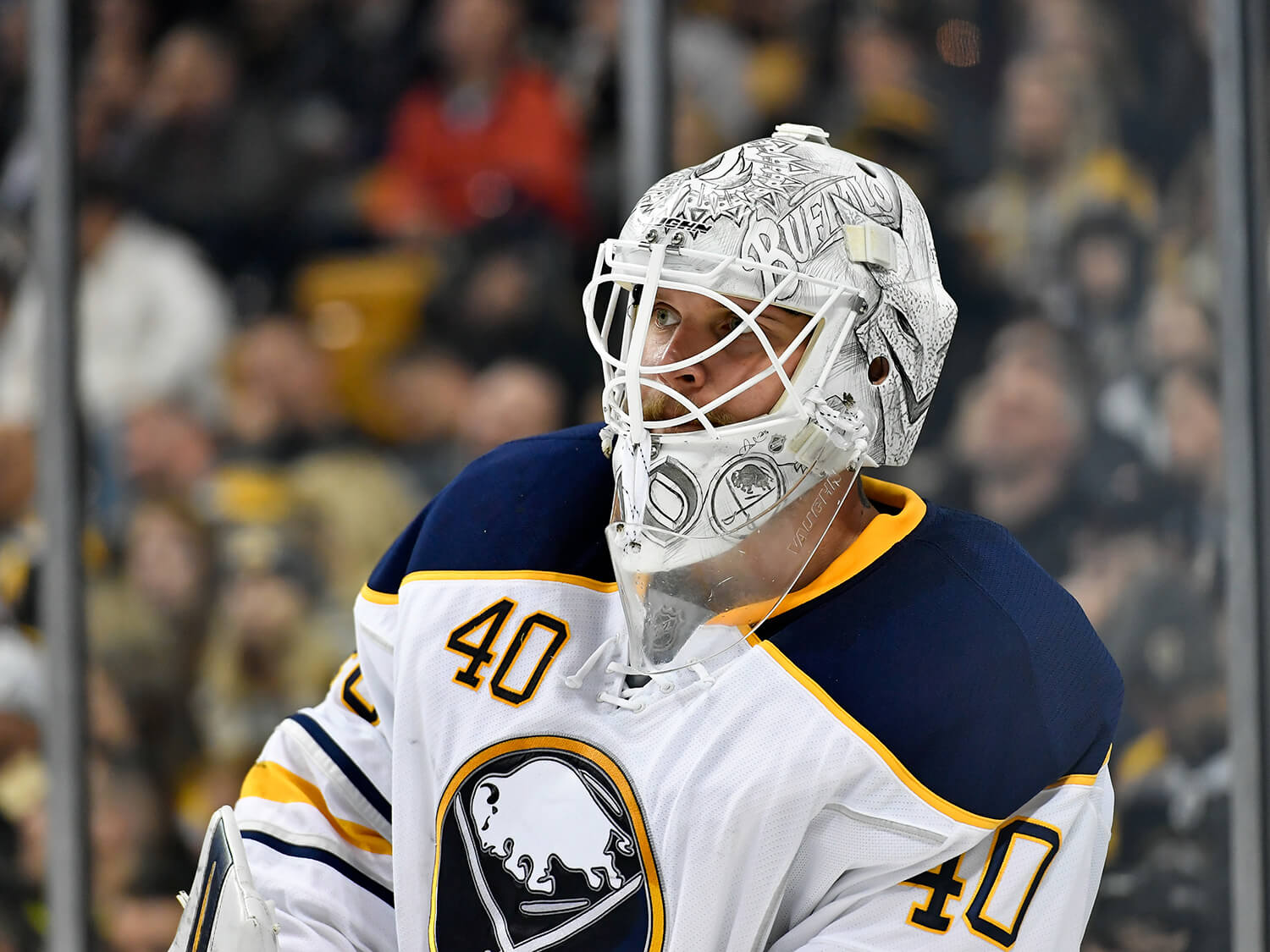 Los Angeles—Drew Doughty scored late in the third period and Jonathan Quick made 23 saves as the Los Angeles Kings defeated the Buffalo Sabres 4-2 on Saturday at Staples Center. The team was celebrating Halloween early, since they’ll be on the road for that last couple of weeks of October after two more home contests. In that spirit, they gave out a Kyle Clifford zombie bobblehead. The ghoulish nature of the prize suited the mood of the Buffalo Sabres after the Kings put them, ahem, underground.

The winner  was scored by Drew Doughty on a slapshot with two minutes remaining in the third period. Dustin Brown was in front of the net, where he had been every time LA was on the power play. He might have gotten a stick on the puck, though at press time, the goal had not been changed.

Strange, though, how goalie Robin Lehner saw the play: “It totally dove on me. Hard. It was going mid-net, and it just dove the last second. It was going to go in my glove, and then it dove, and then it didn’t go in my glove. It’s just how it’s bouncing right now. I see a lot of shots each season, and maybe once every thousand shots, it dies on me. Usually it doesn’t dive.” Usually, Dustin Brown is not standing in front waving his stick, either. Or maybe it was the zombies.

The goaltender summarized, “I think I played a pretty good game, but not good enough. I want to save an extra one.” His further summation: “It stinks. It stinks, but you’ve just got to move on right now.” They’ll be moving just down the freeway to meet Anaheim in less than 24 hours.

The Sabres (0-4-1) held the early lead, but failed to close the Kings out after tying the game in the third period.

Buffalo opened the scoring on Zemgus Girgensons’ first goal of the season at 15:45 of the first period. Jack Eichel rushed the puck down the right side of the ice. He passed it across the slot to the waiting stick of Girgensons, who redirected it past Jonathan Quick into the open left side of the net.

Dustin Brown tied the game on the power play at 7:42 of the second period, his fourth goal of the season. Drew Doughty fired a slap shot from the left faceoff dot that hit Brown in front of the net and dropped to the ice. Jeff Carter swept a shot that Robin Lehner saved. Brown backhanded the puck past the goaltender for the Kings’ first power play goal of the season.

The Kings took the lead on Tyler Toffoli’s second goal of the season at 7:09 of the third period. It was again on the power play, doubling LA’s PP goals on the season to two. Before this evening, they had gone zip for 16 with the extra man.

This night, however, showed that they’ve got their PP figured out. It was played exactly the same way all evening–Martinez at the blue line, Kopitar high on one side and Doughty down near the dot, little zigzag passes between the three of them, and then bam! in to Brown standing right next to the crease. And why argue with success? All three goals aside from the empty netter were on the PP.

Buffalo made it 2-2 at 9:06 on Eichel’s goal, his second of the season. Kane fed Eichel, who skated across the crease, took a shot that Quick saved, then directed a second shot low under the goaltender’s leg pad.

The power play that LA scored the winner on came quite late, and the Sabres players and coach were quick to defend Kane. But allowing a power play with two minutes remaining? Inexcusable on an offensive zone trip.

The Sabres have to hope that they can tighten things up for Sunday’s meeting with Anaheim. The Ducks may have some problems with injury–Getzlaf is a maybe, Gibson left after the first period Friday night, and there are several other regulars out of the lineup–but the Ducks are still a potent, and fast, team.

Against the Kings, Buffalo fell apart whenever LA sped up the game. The Kings were able to control the puck and get Buffalo chasing whenever a little foot speed was applied. That suggests that even without Kesler and the mobile defensemen Vatanen and Lindholm, the Sabres are in tough against an Anaheim group which still features Andrew Cogliano and Rickard Rakell at center on the top two lines.

NOTES: The Kings played a video tribute during a break in the first period for C Jordan Nolan, signed as a waiver pick-up by Buffalo after playing for Los Angeles for six seasons. Nolan won two Stanley Cups with the team . . . . Davis Payne, associate coach with the Sabres, was also recognized. . . . The Sabres scratched three players including RW Kyle Okposo and D Zach Bogosian . . . . The Kings scratched C Michael Cammalleri and D Kurtis MacDermid. C Nic Dowd and C Jonny Brodzinski drew back into the lineup. . . . This evening marked the 50th anniversary of the Kings first game, played on October 14th, 1967, against fellow expansion team the Philadelphia Flyers. The Kings won 4-2 at the Long Beach Arena. . . . And in the greatest irony of all, Clifford was not in the lineup for his bobblehead night. He’s suffering from a shoulder injury.