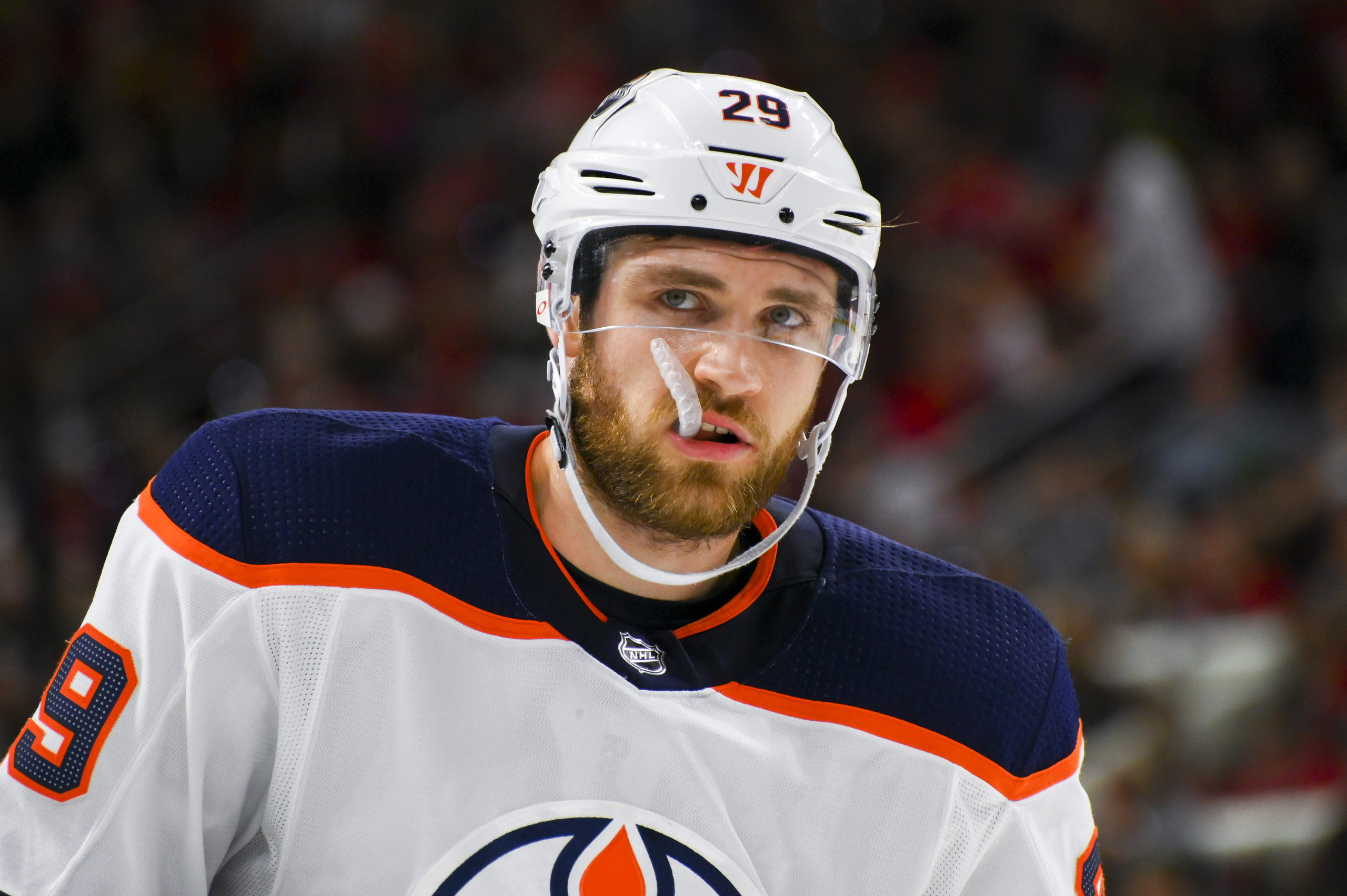 The Anaheim Ducks kicked some a$$ on Friday night, winning 5-0 in Colorado. They also got their a$$es kicked in a late (approx. five minutes left) scrum where Trevor Zegras took a bad cross check and Troy Terry came in in his defense and got whipped by Jay Beagle.

Why did that happen? Because Terry made the assumption that not dropping his gloves would mean not getting pummelled. The only trouble was, he skated in in such a way and engaged Beagle in such way that said, “It’s on.” And Beagle responded, leaving Terry lying on the ice after getting his butt whipped.

The Ducks’ commentators were all over this as the game on Sunday, 5pm, in Anaheim, versus the Oilers, began. Outrage! “The league should do something,” said Brian Hayward. “This was a headshot,” he opined.  No, it was not. It was a young player (Terry) mistaking the fact that he could skate into the fray and not get his a$$ whipped because he didn’t drop the gloves. This was a stupid miscalculation on his part, and it cost him, and the team.

I’m not saying I like the fighting, or that I’m happy that  Terry got beat up, the aftermath of  which had him missing the Ducks’ Sunday  night contest in Anaheim versus Edmonton. But let’s be straight: NHL players have a code. It might be barbaric and stupid. I’ve written about that plenty of times. (Witness the fight between Getzlaf and Joe Thornton in  the playoffs some year  back—right off the faceoff. Pointless and absurd.) But it has rules. And one of those is that you don’t have to fight. Many  times, players don’t engage, but  just grab each other and stare off into space.

But  when you  do make physical gestures that say “I’m OK to fight,” then you  damn  well better be ready to punch  it out. And you’re asking for it if you make the “I fight” body language and then expect someone NOT to punch you out. That’s what happened to Terry, and despite my  despising of the  code, despite my  sympathy for Terry, and despite my  affinity for the Ducks, I have to be honest when I say Troy Terry asked for it, and he  got it. He’ll  likely know better next time.

With all that established, what about  the  game Sunday? Well, to be fast, the Ducks made an interesting line adjustment, putting Sam Carrick up on line one with Sonny  Milano and Trevor Zegras.

“Z” was coming off another lacrosse-style goal, scored after a beautiful between-the-legs play  that  failed and was paled by  the fact that Zegras put the puck on his blade and, stretching out this  time, scoped it into the far side of  the net. But that was Friday. Sunday was a different story. There were to be no pretty plays, unless you’re talking about what the  opposition did.

Note that this night, Sunday now, was CHOC night at the Ducks’ game. This is not for nothing, and it’s not fluff. The Ducks, according to a close associate of mine who used to work at CHOC, are everywhere. They give money, and they have events. Players spend a LOT of time there. They sacrifice for the cause of helping kids beat dreaded diseases. This is REAL.

And before the Ducks’ game, they played video of a young man with Trevor Zegras. I missed the first part, but I’m assuming this was a CHOC patient. Jackson was his name. He literally had his jaw drop when he saw Zegras standing in front of him and autographing a stick for him. None of that is the point here. Rather, this: Zegras was genuinely awed by  the awe  of the kid. His body language said so. Indeed, so did his embrace of the boy, his hands caressing the kid’s shoulders with true—and I know how bold this sounds—love. He said after that Jackson had given him a bracelet and that he was wearing it, and all of this resounded with truth. Trevor Zegras has officially become my favorite hockey player over all of this.

So what about the Edmonton game? Not good. The Canadians had a 3-0 lead before the end of P1, and a 4-0 advantage as P2 wound down. This on a power-play goal and three at even strength.  Meanwhile, the Ducks trailed in shots 24-14 with seven minutes to go in P2 and 30-17 by  the end of the middle twenty.

The Ducks were playing without their captain Ryan Getzlaf, again, after he had a lower-body  injury last week and played through  it for a game but was not ready  to come back full-time.  Also scratched were the aforementioned Troy Terry and Simon Benoit. The Ducks iced the  traditional 6 D and 12 forwards, unlike their  strategy last week,  which  saw an 11-7  lineup.

The starting goalie was John Gibson, with Anthony Stolarz backing up, and getting some thought as a replacement when Gibson seemed to be flagging late in period two. The switch didn’t happen.

The four goals in two periods  were no  fault to Gibson. The Oilers just have a way of  bringing the skill, and even when that wasn’t the case, as with goal #3, it was a matter of a screen that totally  blinded Gibson.

Period  three saw the Ducks get closer with Zach  Aston-Reese getting his own rebound in the high slot and  potting a goal with  less than four minutes gone. It was his first as a Duck. He earlier had an  assist in Arizona on Friday. This goal was unassisted.

Any  thoughts of a comeback were quickly erased.

Right after the  Ducks’ goal, McDavid broke in alone to the  right side of the  slot, careening in on Gibson and shooting far side. The puck just went past the goalie’s right side, the long side to McDavid. Aston-Reese later teamed up with  Henrique to charge in on Mike Smith and get off a dangerous shot. No goal this time, but the Ducks were crashing. Henrique has assists in his last three games. It would yield no more scoring.

There were no spectacular lacrosse goals. No more of any kind, in fact. The Ducks simply got taken to school by  a faster, more skilled team.

The ending was anti-climactic, with the Ducks never close. Perhaps the only highlight was the Ducks breaking the Oilers’ netminder’s shutout.  After that, the Oilers scored goal five off a long shot from the point the eluded a crowd in front.

Then Leon Draisaitl got a goal late in the  going to reach 50 goals for the year. He scored it on a one-timer from the right side of  the zone, scored going down to the  ice and just past the faceoff dot.

The goal tied his career high and gave him 101 points on the  year—and counting. And fans, even those in the somewhat sparse Ducks’ arena, had to be happy for him and happy  to see a  linestone that has always  meant something back to Maurice Richrd. Look that up.

The stats don’t always tell the story, but for this game, they do. The Oilers outshot the Ducks 46-32 They had 65 pucks that made it on net, were blocked, or missed. The Ducks had 60.

Gibson made 44 saves playing  Ottawa in January for his season  high. The Oilers forced him to make 40. He  can’t have been happy  about  allowing six in terms of his stats, but he stayed in until the end.

The Ducks now await Calgary on Wednesday. The Oilers play in San Jose on Tuesday.

It was a pleasure to have my friend Greg Heakes, who just retired as a sportswriter for the French Press Agency, visit for a few days this week. We dragged out my O-Pee-Chee 1971-72 complete set of hockey cards and reminisced, and we  listened to the Tragically Hip and watched their final concert. I recommend this to all of you, especially  Canadian ex-pats who miss the  homeland.

Brian Kennedy  is a member of the Professional Hockey Writers Association