Allentown, PA- Across all of college hockey, 13 players drafted in the first round of the NHL draft took to the ice. Seven of those players donned the Maize and Gold of Ann Arbor. Of those seven first rounders, four of them were selected in the first five picks of the most recent draft including the top two selections. The talent level offered by the 2021-22 Michigan Wolverines is completely unparalleled by any unit in the collegiate and junior ranks. That talent, and some concerning discipline, were on display in a 5-3 win against the American International College Yellow Jackets to open the 2022 NCAA Hockey Tournament.

Garrett Van Wyhe opened the scoring 3:37 into the game with a beautiful snipe set up by the Luke Hughes, the nation’s leading blue-line scorer. Ethan Edwards followed up 39 seconds later with his 3rd of the season off passes by Brendan Brisson and Matty Beniers. Michigan had three more grade-A chances that didn’t sneak into the net thanks to Alec Calvaruso in the AIC net. The Yellow Jackets got one back with Brian Rigali punching in a pinballing puck for a 2-1 intermission score. 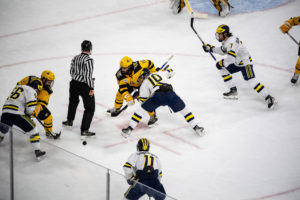 AIC controlled the rhythm of the third period, demonstrating the grit and determination that’s made the Yellow Jacket champions of the Atlantic Hockey Association for the last four years in a row. The shots were 12-5 and AIC got one goal back with a trademark endearing story. Garrett Van Wyhe took a holding minor and on the ensuing power play, Blake Bennett found space in front of the Michigan net and potted a nifty backhander for a 5-3 score.

The goal was Blake Bennett’s 8th goal in the last five games of his season an 19th overall. Yellow Jackets Head Coach Eric Lang did not take Bennett to Fargo for the 2021 NCAA Tournament. “We left him behind because he wasn’t in the physical condition we wanted a Division I athlete to be in. Blake had to make some decisions over the summer. He was going to get serious about his conditioning level and play a huge impact in this program or he was going to move on to a different program. He looked me in the eyes and said this is what I’m going to do and never looked back.” Bennett rewarded Lang with eight goals and twelve points in the playoffs.

AIC almost got anther goal with the goalie pulled but couldn’t punch it home. Erik Portillo stopped 11 shots in the frame, but Michigan did show some weakness in the frame in front of him. With about 30 seconds left, Wolverine captain Nick Blankenburg bodied Elijah Barriga hard into the ice. Brian Rigali took a follow-on roughing minor as well, and Barriga limped off the ice to the bench. Michigan closed out the win, but Head Coach Mel Pearson was no happy with his team’s close out.

“We had taken some penalties and I did not like those penalties. We have to be careful anywhere near the boards. We have six or seven things you write up on the board that we believe. In the third period it was discipline. You have to stay on the ice and that created some issues.”

All-in-all, the Wolverines took a step closer to what would be the 26th Frozen Four in program history, the most in all college hockey.

“I’m as proud of our group today coming out of this game as any other game we’ve ever had, or we’ve won all season long,” said Coach Lang in the postgame. “We’ve got guys that play with integrity and honor. The part that stinks, the most that hurts the most is I don’t get to coach this group any longer. And that hurts. I love these guys…”

In the meantime, let's take a look at Young's goal!!#DefendTheHive pic.twitter.com/IFifMqQzPT

“The first time I put on an AIC jersey, I can still remember it and today was my last time,” said Ljubljana, Slovenia, native Luka Maver. “If I could get another opportunity to put it on again, I would 100 percent take it.”

Brian Rigali and Alec Calvaruso joined for the 2021-22 season and contributed mightily for the third straight championship. Calvaruso stopped 26 of 31 shots faced.

Captain Parker Revering, Chris Van Os-Shaw, Elijah Barriga, and Atlantic Hockey player of the year Chris Theodore are all seniors with an extra year of eligibility thanks to the pandemic. All will have to sort out whether they will return to Springfield or play elsewhere in the 2022-23 season.

“I feel like tonight we could have had five in the first,” said Brisson “If bounces aren’t going our way, we just have to keep to it, keep scoring, playing good defensively and run away with the lead so at the end of the game, it doesn’t come down to a close one like that.”

Michigan will face the Quinnipiac Bobcats for a spot in the Frozen Four. Puck drops at 6:30 PM ET at the PPL Center in Allentown, PA, on Sunday night.