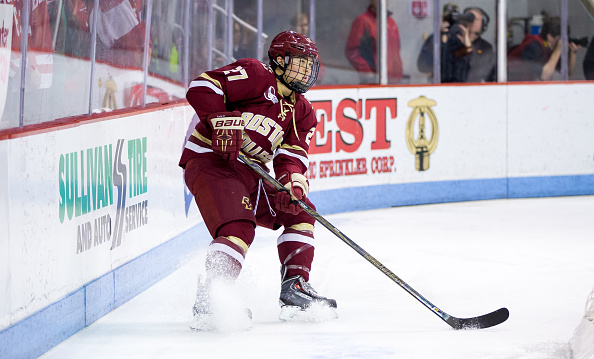 Boston, MA- Leaving the ice disappointed with effort is a rare feeling for Greg Carvel in the 2019 season. His Massachusetts Minutemen have set the standard for Hockey East throughout the season and won their first Conference Regular Season Title. They performed well against New Hampshire to reach TD Garden for the Conference Semi-Finals for the first time since 2007 and brought massive fan support from Amherst with them to face Boston College. Sadly, according to Carvel after the game, “They (BC) looked like a team playing with a purpose. They played with the appropriate enthusiasm for a game of this magnitude and my team just wasn’t.”

UMass did win the shot battle in the opener 12-7 and showed flashes of composure and control. Jerry York’s Eagles responded with maturity and patience. The teams traded hits but the conference’s traditional standard-bearer shone through. In the dying seconds of the opening frame, Logan Hutsko fed David Cotton in front of the net for a redirection and a backhander snuck through Minuteman goaltender Filip Lindberg for a 1-0 BC lead. The goal was Cotton’s 22nd, a Hockey East high.

The Eagles thoroughly dominated the second period. They won the shots 17-5 and out-attempted UMass 27-12. Lindberg performed valiantly, stopping every shot in the frame and anchoring a remarkable 1:15 long 5on3 penalty kill. UMass was unable to get many more chances before the buzzer but still only trailed 1-0.

The Minuteman offense opened up in the final frame. They rushed the BC net for 19 shots in the third. Unfortunately, BC’s junior netminder, Joseph Woll, survived the rushes and stopped every shot he faced to silence keep UMass off the board for the first time in over a month. UMass was also denied a goal after an egregiously terrible early whistle, but the Minutemen did themselves few favors.

Chris Grando capped a 2on1 rush for his third goal of the season. With Lindberg pulled, UMass created a few more chances, but Julius Mattila fired a shot from 200 feet away for an empty netter and a 3-0 final score.

“We all feel pretty badly, that we let a great opportunity go by”, said Carvel. “Can’t imagine we’ll do that twice.”

UMass drops to 28-9-0. The Minutemen have secured a spot in the NCAA Tournament. Their opponent and seeding will be announced in the Selection Show on ESPNU at 7 PM on Sunday, March 24th.

Joseph Woll recorded a 35 save shutout. It was the first shutout in a Hockey East semi-final game since Connor Hellebuyck stopped 35 Notre Dame shots in the 2014 Hockey East Tournament.

“We’re tight as a club,” commented Jerry York. “I’d have loved to have said ‘we’re a really good team in January’. But we weren’t. We were just fractured. Our kids were working real hard. You can’t really look at records. You look at ‘how are you playing the last five games.'”

BC improves to 14-21-3. The Eagles play in their 19th Hockey East Conference Championship game on Saturday night against Beanpot Rival Northeastern. Puck drops at 7 PM at TD Garden.