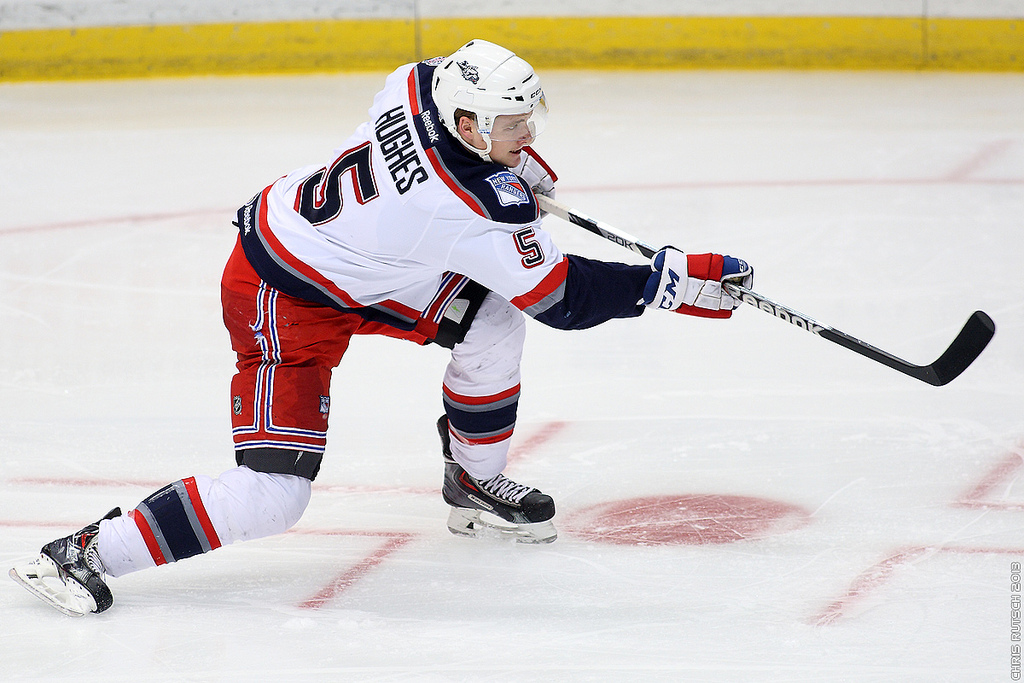 Hartford CT: Full speed ahead and returning to the XL Center for what could be the last hockey game of the season for the Hartford Wolf Pack. After coming out on top Tuesday with a 2-1 victory, the Wolf Pack forced tonight’s game five win-or-go-home meeting against the Providence Bruins. Their win in game four comes after two consecutive Bruins’ victories; one of which was a triple overtime steal. Tonight’s winner will advance to the conference semifinals.

A 7PM puck drop, and we’re off! Just 1:30 into the first period and Providence comes out with a big shot at the goal, the puck flew past goalie Yann Danis and hit the cross bar. The Wolf Pack caught a lucky break on this one though, after a stop in action followed by a long review referees agreed that this was not a goal. Following the close call shot, the Wolf Pack picked up the first power play after Providence’s Rob Flick was given a penalty for tripping. The Pack however, couldn’t capitalize on the play. Power plays have come as a struggle for the Pack; this is something that the team had previously struggled with earlier in the season. Although making major improvements over the course of the year, this series has been difficult and the Pack have seemed to go cold in key scoring opportunities.

With the scoreboard still fixed at 0-0, the first period ended with a great breakaway chance by, Oscar Lindberg (HFD). Lindberg’s last attempt beat the buzzer and to put a number on the board; was halted by a pad save from Providence goalie, Jeremy Smith.

Providence managed to get the first point of the game at 7:55 in the second period. The goal came as Danis was attempting to clear the puck, Colin Stuart (PVD) sent the puck right back at Danis who wasn’t able to block the shot this time. Another review followed Stuart’s goal, however, the refs ruled that the goal would count.

Down 1-0, the Wolf Pack gained a second power play at 14:11 after a high stick call on defenseman Joe Morrow (PVD). Morrow’s high sticking actually caused bloodshed, Chris Mueller (HFD) was caught off guard by the stick and ultimately hit. This power play, the Wolf Pack finally managed to buckle down and capitalize. Mueller, who had just been hit, took a big shot going past Smith and landing right in the net. The Wolf Pack tied the game up, 1-1, at 17:27.

Unable to score a tie-breaking goal in the remaining minutes of the second period, the teams headed into the third period and final chance to lockdown the series.

To start the third period off, Hartford’s Justin Viave delivered a hard slapper at the Providence goal, Smith was ready for it though and quickly blocked Viave’s attempt to break the tie. Tommy Cross (PVD) took advantage of power play that the Bruins’ picked up after Shawn O’Donnell (HFD) was given a penalty for interference. Cross took a shot, which grazed over Danis glove side shoulder and into the net at 7:36, making the tie 2-1 with Providence leading.

As the period began to wind down, it began to appear that Providence was going to take the win for game five. After pulling Danis from the net with less then a minute left, the Wolf Pack took a 6 on 4 advantage; with 45 seconds left in one of the biggest games of the season, Mueller scored another goal to get the game back into a tie. The period ended 2-2, and once again the two teams were heading to overtime.

This is the second game of the series, which the Wolf Pack and the Bruins have found themselves in overtime; the first, during game three, where Providence won in triple overtime. After battling for a bit in the beginning, Tommy Hughes poked it in the net to win the game, and win the series.

Over joyed at the successful win, assistant coach Pat Boeller said after the game, “It was a lot of fun to be apart of. We said never say die and we didn’t.” Boeller went on to say, “We knew if we kept digging we would be rewarded.”

And the Hartford Wolf Pack was certainly rewarded tonight. The team will move onto the next round, date and location are to be determined.