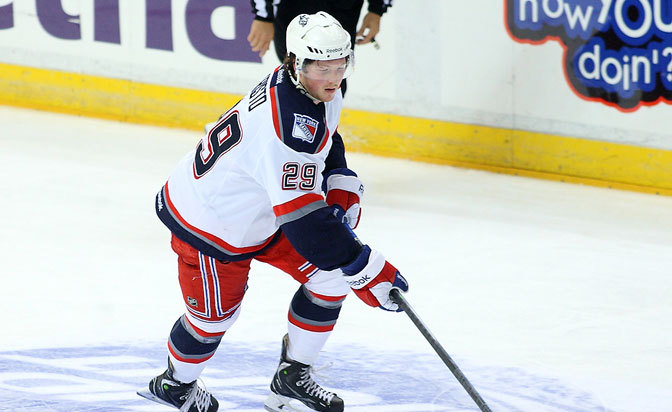 Hartford CT – Friday night, and we’re back at Hartford’s XL Center for the last of ten meetings this year between the Hartford Wolf Pack (39-23-5-4) and the Springfield Falcons (36-28-8-1). Overall, the Falcons haven’t been the greatest challenge for the Wolf Pack this season, holding the series record at 6-0-0-3. In hindsight it appears that this game should be a breeze for the Wolf Pack, especially being on a hot streak right now, the team has no reason to get onto the ice without confidence. In case you missed out on the action from last weekend, or haven’t fully caught up yet, the Wolf Pack had two astounding last minute come-from-behind victories – one of which was a shootout win against the league leading Manchester Monarchs. That’s of course not to say that the Falcons haven’t been on top of their game though. The Falcons are 2-0-0-1 in their last three games, after a rough 2-8-2-0 stretch in the previous twelve games.

A pretty fire-y start for the first period, Yann Danis, who has definitely been heating up and has been rocking it in the net the past few games got a start in goal for the Pack tonight. Danis wasn’t expecting to be suiting up for the game tonight, as the starter originally was supposed to be the popular rookie, Mackenzie Skapski, however he was injured this morning during the morning skate. Although the last minute switch came as a surprise, Danis started off the night with a big save on the first shot of the game, despite the first shot being fired into the Pack zone, the Pack came back tossing their own shots at Falcons goalie Scott Munroe. Danny Kristo got a little sneaky, maneuvering his way around the eyes of the Falcons to put one past Munroe at 5:59, this made it Kristo’s 21st goal of the season. A few minutes later, Chris Bourque – who is playing without his brother Ryan tonight as he was recently called up to the NHL – caught Munroe in somewhat of a day dream, and managed to hit in from the corner boards. Keeping the momentum up, Dylan McIlrath came in hot with a shot from the blue line to give the Wolf Pack a 3-0 advantage over the Falcons. Goalie Munroe was immediately pulled and replaced with back up goalie, Joonas Korpisalo.

The second period got off to a pretty slow start, not very much action going on, on the ice. However, with three minutes remaining in the period things got frisky in the Falcons’ zone with some heavy pursuit by the Pack. Shawn O’Donnell was able to knock the puck in despite having a number of bodies in front of the net. A noticeably frustrated Springfield reacted with some pushing and shoving leading to a Wolf Pack power play. The power play gave Kristo another great shot and his second goal of the night at 16:49. The Wolf Pack closed the second period with a whomping 5-0 lead on the Falcons.

Another slow start to third period, it was pretty clear that the Falcons were letting the deficit get the best of them. The third period was bit of a doozy, but the Wolf Pack shut out the Falcons 5-0. With Hartford’s regulation win, and with tomorrow night’s opponent the Albany Devils loss, the Wolf Pack clinch a spot in the playoffs. In a post game interview with Assistant Coach and Assistant General Manager Pat Boller told the press in regards to the past couple of games that “We were focused on getting the couple points.” All the hard work and focus definitely paid off for the Pack.