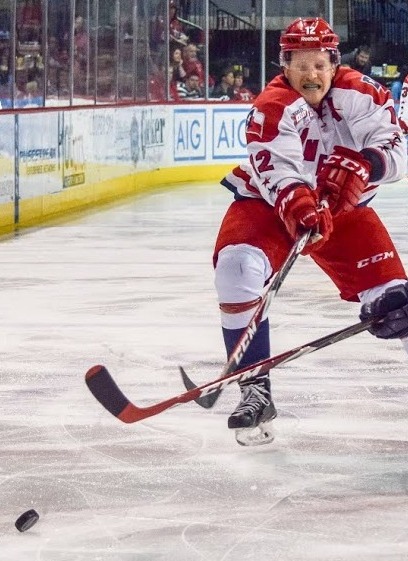 A five goal third period usually leads to a victory.

But the Allen Americans dug themselves too big a hole in Game Two of their ECHL Kelly Cup Final series on Sunday afternoon, May 29 at a sold out Allen Event Center. Trailing 7-1 after two periods as a percentage of fans were leaving the building ahead of an approaching thunder-and-hail storm, Allen’s furious third period comeback fell a goal short. The 7-6 loss enabled the Eastern Conference Champion Wheeling Nailers to tie the series at a game apiece, with Games Three, Four and Five scheduled for West Virginia.

The 13 goals tied a league record for a Kelly or Riley Cup Finals series game.

This series is a mirror image of the NHL’s Stanley Cup Finals – Allen is a San Jose Sharks development team, while Wheeling is affiliated with the Pittsburgh Penguins. Wheeling, the fifth-ranked team in the East, became the first team in ECHL history to win Games Six and Seven on the road when it outlasted defending champion South Carolina to capture the Eastern Conference title.

Allen upended second-ranked Fort Wayne in five games to earn the Western Conference championship. The Americans, who defeated South Carolina in seven games last spring to cap their first season in the ECHL, also captured the Central Hockey League’s Presidents Cup in 2012-13 and 2013-14. The Americans are also the fifth team in ECHL history and its first in 22 years to return to the Finals after winning the previous year’s hardware. Toledo last turned the trick, earning the 1994 and 1995 Riley Cups.

Some key questions will be answered in the days ahead, including whether Wheeling can continue to score almost at will against a suddenly depleted Allen defense and less-than-spectacular goaltending, and whether Allen can simply ignite its explosive offense whenever it decides to light the fuse. The replies in the form of the teams’ play will go a long way toward determining whether Allen wins its second straight Kelly Cup and fourth straight playoff title.

“Wheeling has a great team,” said Allen co-captain Gary Steffes, whose two goals and one assist helped fuel the Game Two third period rally. “They have a lot of scoring power and skill, which we learned firsthand. The positive is we also learned we are an extremely capable team that has a lot of resilience. That will be huge as we head into the next few games. We will watch film and reevaluate, learn and make needed adjustments for (Game Three and beyond).”

Allen’s dizzying comeback in a span of 9:42 had the raucous crowd screaming. After Spencer Asuchak netted his sixth of the playoffs, defenseman Aaron Gens picked the upper lefthand corner for his first post-season goal to make it 7-3. Then Steffes sandwiched his ninth and 10th goals of the playoffs around Casey Pierro-Zabotel’s seventh red light to make it a 7-6 game.

Wheeling replaced starting goalie Brian Foster with Franky Palazzese, who made four nice saves to hold the Americans scoreless the final 9:57 of regulation.

“We never quit,” said Gens. “I am proud to be a part of this great comeback and the effort of our team in the third period. However, the first 40 minutes were inexcusable and won’t happen again.”

“I did not see the third period (rally) coming (because) the first two periods were the worst I can remember,” said Allen GM-Coach Steve Martinson. “The third period is all on our players, who decided to play. The only thing I said was ‘go win a period’.

“We surrendered too many one-timers (goals) and failed to block passing lanes,” Martinson added. “You can’t dig yourself out of that big of a hole.”

Wheeling led 3-0 after one period on goals by Derek Army, Clark Seymore and Cody Wydo. The visitors extended the lead to 5-0 in the second period after Anton Ziobin and Jarrett Burton lit the lamp. After Allen’s Chad Costello netted his fifth of the post season, Mathew Malonemade it 6-1, followed by John McCarron’s shot into an empty net (Allen’s league-high sixth goal allowed while they were on a power play this postseason) after Martinson opted for a six-on-four power play by pulling backup goalie Joel Rumpel.

“We need to focus our consistency and execution,” said Steffes. “Our skill is evident. Our execution needs to become more consistent. We will learn and be prepared come the next game. This was a great wakeup call for us.”

In the series opener, Allen grabbed the lead with a 5-3 victory Saturday, May 28 before a sellout crowd of 5,625 at the Allen Even Center. Forward Tristan King scored his fifth and sixth goals of the postseason, including a power play marker to give the Americans a 2-0 lead midway through the second period.

“We knew we had to get out to a fast start (on the power play),” said King. “(Defenseman) Eric Roy made a great pass across from the left point, and I was able to get (the shot) away quickly to find the back of the net (for a 1-0 lead).”

After Wheeling cut the lead to 2-1 on a shorthanded goal by Shane Bakker late in the middle period, Americans’ forward Greger Hanson netted his ECHL-leading 12th playoff goal just :24 later to make it 3-1. Asuchak made it 4-1 in the final minute of the period by deflected home a shot by Gens for his fifth red light of the playoffs.

“I put myself in a good position in front of the net and was able to get just enough on the puck to deflect it past their goal,” said Asuchak. “It was a great play by (Gens) to get it through their defense.”

After Wheeling cut the lead to 4-3 by the middle of the third period on power play goals by Ziobin and McCarron, Allen’s Steffes added insurance on his eighth playoff marker with just under two minutes to play. Goalie Hildebrand made 25 saves and improved his 2016 playoff record to 3-2. The Americans allowed their league-leading fifth shorthanded goal of the postseason.