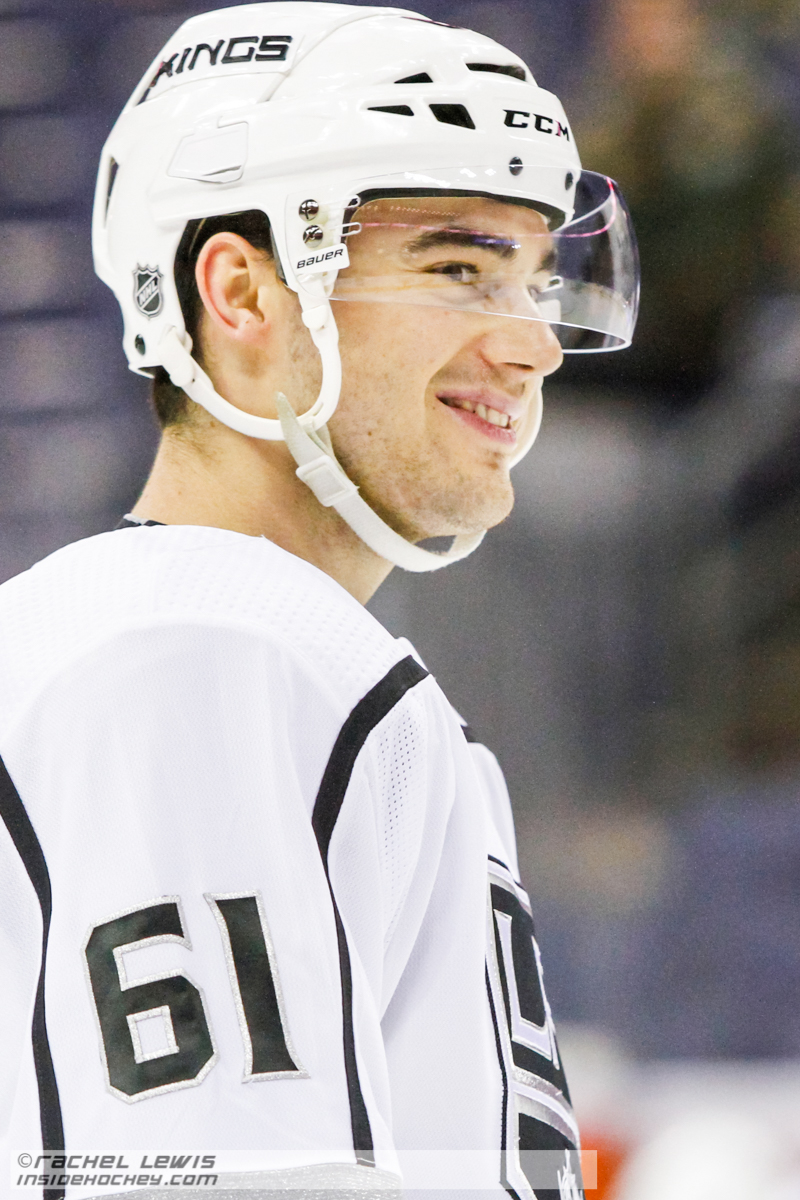 It was another night  of losing for SoCal NHL teams, albeit with  some warm and hopeful moments thrown in. That latter point applies to the Anaheim Ducks, whose netminder, Ryan Miller, was finally playing his last-ever game. This after an emotional tribute from the few home fans allowed in the Honda Center in his last home game late in the week. This one was the last for Miller, and the last for the team on a losing year.

Miller can say with pride that he gained his team a point in his last-ever NHL game. The Ducks were up 1-0, in fact, before allowing Minnesota to score three in a row. None of them had anything of fault for Miller. He had no help. And along the way, he made a couple of spectacular glove saves and showed that he can still do the splits. (Makes you wonder why he’s finishing—there’s another year in them legs yet, kid.)

The Ducks didn’t give up. Anaheim got it to 3-2 on the strength of Trevor Zegras’s third goal of the  year. They then tied the game with a last-second tally by Max Comtois with Miller pulled.

I was hoping it would go to a shootout where the last move would be Miller stoning someone and sweeping a puck aside as it was lying at his feet. No such luck. The game ended, in Minnesota’s favor, when Victor Rask scored about halfway through OT. It was a two-on-one that Miller had no chance on. The puck went in short side, on Miller’s blocker side. Hopefully, he won’t replay it in his head, but rather focus on the nearly 22,000 shots he saved over the course of his career instead.

Miller, who had been the subject of a tribute in-game, also had the whole Minnesota team line up to shake his hand after despite the loss, and he later spoke to the media after visiting with his mom and dad, who had made the trip from Michigan for the event.

He looked stunned in his Zoom conference, as if he was really bearing the weight of his decision to stop playing NHL hockey for the first time. His comments were muted, from somewhere else other than right here in this moment: “It would have been nice [to win] but it was a fun game, the way we settled back in in the third period. It was good to compete until the end,” he said, brushing aside his hair and staring out as if he wasn’t quite sure where to look.

He added that it was “pretty emotional” to have his parents in the stands, citing Covid as a factor. “It’s like with everybody. It was only recently that we’ve been able to reconnect with family. They’re fully vaccinated, and I’m fully  vaccinated, and it’s finally  to a point where we can connect a little bit more intimately. It’s been a long year of FaceTime, and it was nice that they could come to a game.”

He talked about the ceremony  that has surrounded his last couple of weeks as the winningest US-born goalie, ever: “I wanted to say goodbye, and I think this is going to help moving forward for sure. It was a lot of fun.” Poor Miller, though—there was just so much vacantness there, like he knew what he ought to say, and said it (the good hockey player to the end) but he doesn’t believe it. Mortality is a hard thing to grasp, and he cheated it for so long, playing until 40 years old, that his longevity must have made leaving the more problematic.

With the presser done, Miller had to hurry to the bus, already full of his teammates.

Meanwhile, the Kings were playing at Staples Center against Colorado, and they were bad early. They got behind 2-0 before getting a goal back. That did little to keep them in, as the Avalanche scored to surge 3-1. Through two periods, the Kings had 11 shots, to Colorado’s 25. Colorado scored one of its goals on the PP. The Kings failed in their one power play attempt through two periods.

The third period saw the Kings close to within one, and much of the play concentrate itself in the Colorado end. But a lot of chances hit a leg or were otherwise blocked—that’s what good teams do. The Kings had a power play in the third but did not take advantage.

In the game, the Kings were outshot 30-18 in the 3-2 loss. Their goals came from Sean Walker and Rasmus Kupari. For the latter, that was his first goal, a bright spot in an otherwise dark end to a season. He talked about his goal after the game, saying, “Obviously a great feeling to score the first NHL goal.” He said the pass was great, and “I had time to pick up that puck, and take a look at where’s the hole, and shoot it over the pad, and it was great.” The man who delivered him the pass, Lias Andersson, was also the one who picked up the puck after for a souvenir deliverable to Kupari.

Of course, the season is not quite over. The Kings still have three games remaining, on Monday, Tuesday, and Thursday of next week. They are out of the post-season hunt and thus have to perhaps hope to showcase their young talent in the games remaining to them. (Finally, after a game late in the week last week, the word “rebuild” was used to describe what they’re doing. Up until then, Coach McLellan had held out hope for the playoffs, as well he should. That was never close to happening.)

The first of the games remaining is at home, the other two away. Fans will watch to see whether anyone can rise above his peers and make a case for getting some playing time next year.

After Saturday’s contest, Coach McLellan said, “I liked our game tonight. There were moments when, especially early, I thought we were a bit intimidated, but once we started to play, we were aggressive. Our forecheck was much better than it was yesterday, and I liked our game.” He cited the character and drive of the Kings and said that extended to every player. “Third period was as fast as we’ve played in a long time.”

However, he was realistic also. “We’ll take some [moral victories] as we wind up, but eventually moral victories don’t get you a whole lot, and we have to get better as a team.”

I don’t want to pile on on a bad season for the Ducks, but if this isn’t doublespeak, then I’ve never heard it: “It’s interesting. I think the best way to put it is through the first dozen games . . . we were close to a .500 team, and I was worried about our younger players. They weren’t performing how I thought they were going to. And even though our record was better at that time, I was a wee bit worried. Now, we find ourself out of the playoffs, but I’ve never been more encouraged, about our group and about our future than I’ve been since I’ve been here.” That was Coach Eakins’ post-mortem on his team’s year.

Parse that: Is the point to win or not? How can you be happier now that you’re losing than when you were winning? I get the look to the future. I also see a coach who has been unsuccessful in terms of his results and now wants to make it seem like everything will be OK. It makes one wonder whether the media in a media-saturated market would abide these platitudes.

Having said that, it was good to see Zegras snipe one to make his total three goals. His shot, placed up over the goalie’s shoulder on the long side, is exactly where the elite scorers are putting the puck these days.