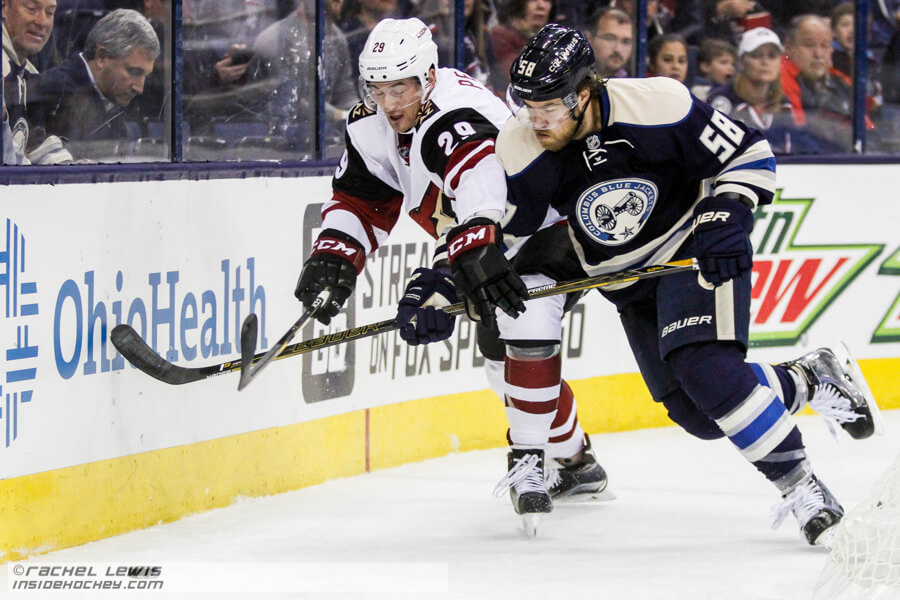 What Caused the Turnaround for the Columbus Blue Jackets?

Last season for the Columbus Blue Jackets could have been their most disappointing giving consideration to the expectations heaved upon them after their injury-plagued 2014-15 season in which they led the National Hockey League (NHL) in the non-dubious category of ‘Man Games Lost to Injury’ (most games in total due to injuries). With most of the squad seemingly healthy, the 2014-15 season was viewed as an aberration caused entirely by injuries and that the Blue Jackets would ascend to a contender in the NHL’s Metropolitan Division and a near certain Stanley Cup Playoff participant.

But, as chronicled, before, their 0-8-0 start, leading to the firing of then head coach Todd Richards and bringing in longtime head coach John Tortorella to jumpstart the moribund, underachieving Blue Jackets to realize their potential. The change helped end the horrid skid but the Blue Jackets could never recover their footing and finished near the bottom of the NHL standings with a 34-40-8 record.

Rather than shake up the organization with trades and Unrestricted Free Agent (UFA) acquisitions, the Blue Jackets invoked the trust in their core of players, assuming that a return to form that saw them qualify for the Stanley Cup playoffs and giving the elite Pittsburgh Penguins everything they could handle in the six-game, 1st round playoff series in 2014.  Well, that and due to the Blue Jackets being salary cap-strapped with several long-term and high-dollar contracts to their core players.

They also knew that their 1st round pick in the 2015 NHL Entry Draft (7th overall), Zach Werenski, was an NHL-ready talent that could immediately log big minutes on the top defensive pairings, in particular, with Seth Jones, the 4th overall pick in the 2014 NHL Entry Draft who was acquired via trade with the Nashville Predators in January, 2016 in exchange for disgruntled and a frequent entrant in Tortorella’s ‘doghouse’, Ryan Johansen.  They also believed that the late-season emergence of Alexander Wennberg as its top-line pivot (center) would mitigate and nearly mirror the impact Johansen had on their forward lines.

However, the key to a turnaround of their fortunes rest with the overall health and return to form of former Vezina trophy (NHL’s best goaltender) recipient, Sergei Bobrovsky from a horrific 2015-16 season, both with regard to a slew of long-term injuries and, when healthy, performance manning the Blue Jackets’ net as its workhorse netminder.

Although the Blue Jackets had a very sluggish start to their season, losing their first two games, what occurred after that was one of the greatest turnarounds in a long time and the NHL’s best ‘feel good’ story of the 2016-17 season.

To provide some perspective on the gravity of the turnaround, at the time of the Johansen-Jones trade, the Blue Jackets were essentially out of the Stanley Cup playoff race and possessed one of the NHL’s worst records, thus putting them in the Auston Matthews sweepstakes for the NHL’s next franchise-changing player.

The Blue Jackets, due to a change in the NHL’s draft lottery system, and although possessing the NHL’s 7th worst record, were able to move up to the 3rd position in the 2016 NHL Entry Draft.  Many pundits expected them to take Jesse Puljujarvi with the 3rd overall pick, assuming fellow Finnish countryman Patrick Laine would be nabbed with the 2nd overall pick by the Winnipeg Jets.  However, Blue Jackets General Manager (GM) Jarmo Kekalainen opted to go with center Pierre-Luc Dubois, a signal that the ever patient Kekalainen trusted his current crop of players to ‘right the ship’ and to allow Dubois the opportunity to grow into his newly-acquired position (Dubois was formerly a wing) in Major Junior hockey.

So, what generated one of the great turnarounds in recent history?

A Healthy, Determined Bob – it was no secret that Bobrovsky had his worst season, both as to injuries and in-net performance. Bobrovsky posted his worst statistics as a starter, with a Save Percentage of .908 and a Goals Against Average of 2.75 as well as his first losing season (Wins-Losses-Overtime and Shootout Losses) in his career.  Bobrovsky was also limited to playing in only 37 games due to a groin tear and a broken finger in his glove (catching) hand.  As is usually the case with Bobrovsky, his injuries, primarily with the groin, tend to be of the long-term variety and last season may have been the greatest example.

This season, however, Bobrovsky, due to a rigid, off-season conditioning program in his native Russia, has been both healthy and stellar in net for the Blue Jackets, posting a Save Percentage of .930 and a Goals Against Average of 2.03, nearly mirror images of his Vezina trophy-winning season in 2012-13.  Add to that, Bobrovsky has been the workhorse that was envisioned when he was acquired by the Philadelphia Flyers in 2012.  Although there are concerns to not overwork Bobrovsky, given his injury history, Tortorella has deftly managed to keep Bobrovsky both active and healthy.  Curtis McElhinney has been solid when called upon to spell Bobrovsky when games have been on back-to-back nights.

The Werenski Effect – Zach Werenski has firmly established himself, along with Laine, as the two leading candidates for the Calder trophy as the NHL’s rookie of the year. Werenski, being paired with Seth Jones, has formed a formidable, athletic, steady, minute-crunching top defensive pairing.  Werenski has 6 goals and 19 assists for 25 points in 38 games and a +/- rating of +6 and nearly 21 minutes of time on ice (TOI), pretty heady statistics for someone who, just last season, was playing for the Michigan Wolverines in the Big Ten Conference (collegiate hockey).

However, Werenski’s greatest impact, besides his mature beyond his years, on-ice demeanor, is, by flanking Jones on the top pairing, allows the rest of the Blue Jackets defensive corps, to play on the lower defensive pairings, thus putting the remaining defensemen on pairings where they are more comfortable and, in the case of Ryan Murray, the former 2nd overall pick in the 2012 NHL Entry Draft, the ability to form chemistry with David Savard and to blossom into the position, so long as he, like Bobrovsky, can avoid the ‘injury bug’ that plagued him during two of his first three NHL seasons.  With Werenski, Jones, Savard, Murray and Markus Nutivaara, the Blue Jackets possess the NHL’s youngest defensive corps in their top three pairings with, except for the 29-year old Jack Johnson, an average age of just under 23 years of age.

A Return to Form – Blue Jackets team captain, Nick Foligno, struggled under the pressure of being named team captain, as well as struggling to click with a center after Johansen was traded in January. Foligno plummeted from career-best totals during the 2014-15 season of 31 goals, 42 assists, 73 total points and a +/- rating of +16 to 12 goals, 25 assists, 37 points and a +/- of -14 during the 2015-16 season.  This season, Foligno has bounced back to his 2014-15 form, with 13 goals, 21 assists, 34 total points and a +9 rating after 36 games played.  The emergence of Wennberg to the top forward lines has helped set up Foligno and has taken pressure off of the team captain to carry the offensive load on his back.

Wennberg’s Emergence – Alexander Wennberg has blossomed, this season, into a top pivot for the Blue Jackets. The former 14th overall pick in the 2014 NHL Entry Draft was, through no fault of his own, rushed to the parent squad due to a plethora of injuries in the 2014-15 campaign.  Wennberg obviously struggled a bit during his rookie season as the 19-year old, slight Swede was physically overmatched by the bigger, more physically mature NHL veteran players.  Wennberg scored 4 goals and had 16 assists in 68 games with a -19 +/- rating.  His numbers were slightly better during the following season in which he doubled his scoring output with 8 goals and 32 assists with an improved -1 +/- rating.  This season, however, Wennberg has blossomed as a top-six pivot with 8 goals and 28 assists in 41 games with a +/- rating of +7.  During the off-season, Tortorella challenged Wennberg to improve his two-way play and to be more assertive with shooting the puck, something the usually pass-first Wennberg isn’t accustomed to, nor is he known for being a natural goal-scorer.  More importantly, besides beginning to contribute with goal-scoring, Wennberg continues to improve his faceoff skills as his percentages have incrementally improved in each of his 3 NHL seasons.

Interesting statistic: for those concerned that Johansen’s departure created a massive hole with the Blue Jackets top forward scoring lines, in comparing the statistics of each since the January 7th, 2016 trade for Seth Jones, Wennberg has 13 goals and 45 assists for 58 points and a +/- rating of +4 in 77 games.  Johansen, in 85 games played, has 15 goals and 49 assists for 64 points and a +8 +/- rating.  So, the numbers are nearly identical so it appears that the argument as to ‘who won the trade’, especially adding Jones’ emergence as a top-pairing defenseman, it can be argued that the Blue Jackets ‘won the trade considering that the difference in center scoring and output is negligible.

Tortorella’s Steady Hand – as this statement appears to be the greatest oxymoron given Tortorella’s combative, fiery demeanor and reputation with being overly demanding to players and, at times, his obsession with winning carries over to borderline lunacy, it really has been Tortorella’s steady hand that has jettisoned the Blue Jackets into the top of the NHL’s standings. Since arriving in Columbus in October, 2015, Tortorella has preached accountability, conditioning and to exert his player’s maximum effort, something the Blue Jackets have rarely possessed, save for the period when Ken Hitchcock manned the bench during his tenure in Columbus.  What has also helped Tortorella is the support of the Hockey Operations department, specifically President of Hockey Operations John Davidson and Jarmo Kekalainen, a luxury Hitchcock was never afforded with the prior regime.  For all of his bluster and manic reputation, Tortorella, who recently became the winningest coach born in the United States and recently broke the 500 career win barrier, is a phenomenal coach and tactician and has adeptly motivated and guided the NHL’s youngest team and has the team buying into his philosophies.

So, while the season is at the halfway point and plenty can happen, both good and bad as teams race to participate in the Stanley Cup playoffs, barring a rash of key injuries, the Blue Jackets appear to be positioned for the playoffs with one of the greatest turnarounds in recent memory. Their long-suffering fans have been long overdue.