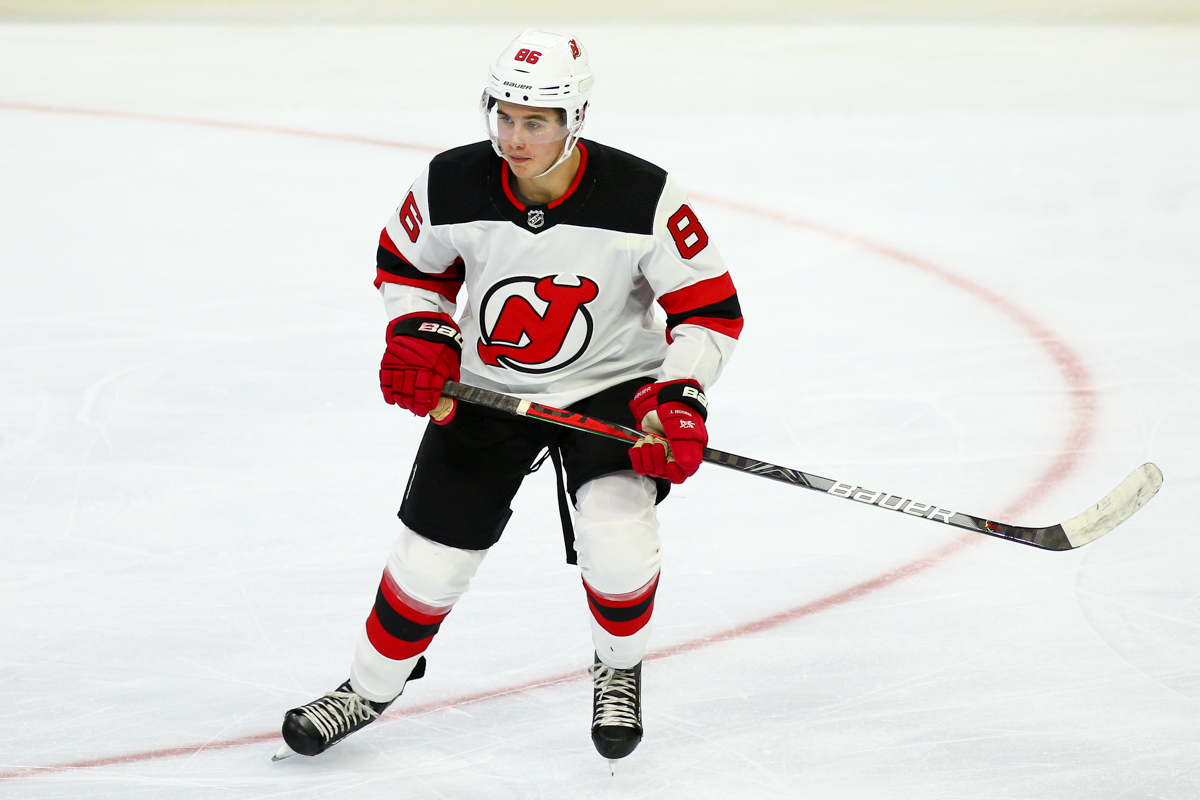 What Can Hughes’ Season-Ending Injury Reveal about NJ?

NEWARK–With 12 games left in the season, the Devils already figured to have a familiar modus operandi. With Jack Hughes sidelined the rest of season, that much has been confirmed by default. But what more could be under review in the fallout of the phenom-center’s early departure?

If a 2-1 deficit to the Rangers on Tuesday felt like it might as well been 4-1 or 5-1, it’s likely because without 86 in the lineup, the Devils were unable to create, challenge or get up the ice enough to make life hard on the Blueshirt-backup, playing role as starter on this night. Hughes, who two weeks ago with the rivals in town scored two goals in the third after the Devils had a sneak-attack five-gaol second period, was revealed to have suffered an MCL injury that will end his season. If the Devils were a bubble team, perhaps the shutdown wouldn’t be the definitive option, but with the organization looking forward, it was the decided path.

“If you ask him, he thinks he’ll be ready to play in a week,” Lindy Ruff said when asked about 86 being shut-down for the season. “That’s just how he is. He’s in great spirits. he feels like it doesn’t feel that bad and I’ll be back in a week.”

Sans-Hughes, the Devils managed to hold the Rangers to four shots in the game’s final 40-minutes of play, but managed one goal on 21 shots on Alexander Georgiev, who almost looked like he was auditioning for New Jersey’s net-vacancy.

“The game turned into a real tight defensive battle on both sides,” Lindy Ruff said. “We gave up three or four shots in the last 40 minutes. That’s a game you don’t see very often.”

And when asked if New Jersey did enough to make the crease workload challenging on Georgiev, it was a definitive answer.

“No,” he said. “I think (New York) would think they didn’t make our guy’s night difficult enough either. It was a game where there wasn’t a lot of high quality opportunities in the game.”

In the 12 games that remain, there will be some sort of rotation of forwards, some riding out the season for an organization they may not be part of in ’22-23. Others, figure to be showcased for what will likely be an active offseason. And, in some evaluation of the organization, you may see a shuffle of Utica Comets forwards, eying middle-to-bottom-six roles. Alexander Holtz could join the team after an underwhelming seven-game display earlier in the season, but it would be equally unsurprising if Utica’s second-leading scorer played out the rest of the year and playoffs in the minors. Nolan Foote, who saw limited NHL action this season and six games last season, may be a better bet for a look as the team looks at who could challenge for a spot and/or dictate where Tom Fitzgerald decides to add and/or upgrade.

A final Pavel Zacha showcase won’t be surprising and was already on display Tuesday after both Yegor Sharangovich and Jimmy Vesey exited with injuries. Starting on the fourth line, Zacha saw time with Nico Hischeir and Jesper Bratt.

“Losing a guy like that and especially a leader in the locker room and on the ice every shift he’s out there,” Bratt said of Hughes’ season cut short. “It’s obviously tough. There’s nothing we can really do about it. It’s going to be up to the guys in the room to step up.”

But if 86’s absence will prompt the organization to reveal what it is without, it will also serve as a review of its parts. Bratt, for instance, enjoyng a career-season playing full-time with Hughes, will have a crack at being the mover-and-shaker of a top line for the Devils heading into an offseason in which he’ll be an RFA with arbitration rights. Which is to say, he may be able to distinguish himself for a long-term contract with an AAV that is somewhere between Hischier’s $7.25 million and Hughes’ recently-inked $8 million. Likewise, a dip will be a point of emphasis on what could already be an interesting negotiation.

The oft-utilized defensive strategy of holding onto the puck as much as possible in-game will also be an expected area to take a hit, which may prompt some evaluation of a stretch of games that have looked at times to be unnecessarily risk-abundant. In their last seven games, they have a -12 goal-differential and have -13 shot-differential despite averaging 28.6 shots-per-game.

This stretch to close out another season in the franchise’s longest saga void of success was already going to be trying with more questions than answers. But, perhaps amidst the loss of the feature piece in the long rebuild underway, will reveal what is obvious in deficiencies and whether reinforcements may come in-house.