NEW YORK – The only thing missing from Alain Vigneault’s angry pre-game press conference Saturday morning was steam coming out of his ears.

Less than 24 hours after second-line center Derek Stepan was injured on a dangerous late hit by Bruins forward Matt Beleskey, the Rangers coach was still fuming over the no-call on the ice, and the lack of supplementary discipline issued by the NHL’s Department of Player Safety.

“By the league not saying anything about the missed call on the ice or supplementary discipline, are they sending a message to the players?” Vigneault said. “Very hard for me to comment on that without getting myself in trouble, my team in trouble, and you don’t know how they see things and how things can unfold in the future. So you’re better off biting your lip, teaching your players to better protect themselves, and move on.”

The hit in question came late in the second period of Boston’s 4-3 win over the Rangers on Friday afternoon, when Beleskey drove Stepan into the boards from a dangerous distance long after Stepan had released the puck.

“Those are things that are very tough for coaches or management to comment on,” Vigneault said on Saturday morning before the Rangers were blanked by the Flyers, 3-0, in the second game of a back-to-back set. “Was it a late hit? In our opinion, definitely was. Should we help Step moving forward to better protect himself, we’re going to try to do that. That’s the second time that has happened.”

The other hit Stepan got injured on came in the 2014 conference finals, when Montreal’s Brandon Prust broke Stepan’s jaw with an unpenalized elbow to the chin.

While the Rangers’ alternate captain finished Friday’s second period, he didn’t come out for the start of the third, and is out indefinitely with two broken ribs. Stepan was scheduled to see a doctor later on Saturday, after which the team expects to have a timetable for his return.

Midway through the third period on Friday, Bruins agitator Brad Marchand, who has a long history of dirty and dangerous plays during his seven-year NHL career, drove hard to the net and hit Rangers goaltender Henrik Lundqvist with a solid knee to the head.

While there was ample contact to warrant a call, Lundqvist flailed back dramatically, drawing a penalty for goaltender inference. The Rangers scored on the ensuing power play to take a temporary 3-2 lead.

“I know [Lundqvist] does some acting on the side but I don’t think it needs to be on the ice,” said Bruins coach Claude Julien. “Referees are there to protect goaltenders and they should. Goaltenders shouldn’t take advantage of referees and you know, you may think it’s a good play for his team to get a power play, but we’re all trying to get that out of our game.”

“[Julien’s] comments on Hank were very inappropriate,” a seething Vigneault responded on Saturday. “The way Hank conducts himself on the ice, away from the rink, off the ice, the example that he sets. Who would you rather have as a son, Henrik [Lundqvist], or Brad Marchand? For him to say things like that about Hank, totally wrong. Probably Claude is getting a little older and needs to check his eyesight.”

“I thought it was kind of disrespectful the way he said it,” Lundqvist said after Saturday’s game. “Diving has never been an option for me. I’ve never done it, I won’t do it in the future, either. I took a hard hit to the head, and your reaction when you get hit from the side where you didn’t see anyone coming; of course you’re going to go down. You see players, you see goalies get hit like that. It was just a natural reaction.”

The acrimony between Vigneault and Julien goes back to Vancouver’s seven-game defeat to Boston in the 2011 Stanley Cup Final, a series that featured Canucks defenseman Aaron Rome getting a four-game suspension for a devastating and controversial late hit against then-Bruins forward Nathan Horton.

Wayne Simmonds scored twice, and Sean Couturier opened the scoring for the Flyers (9-10-5), who snapped a ten-game regular-season losing streak at Madison Square Garden, which dated back to March, 2011.

With Stepan on the shelf, Kevin Hayes moved up to center the second line, skating between Chris Kreider and Emerson Etem. Viktor Stalberg, a healthy scratch Friday against the Bruins, rejoined the lineup on the fourth line, skating with Dominic Moore and Jarret Stoll. Those lines were completely blown up in the third period as Vigneault tried in vain to find a spark.

END_OF_DOCUMENT_TOKEN_TO_BE_REPLACED 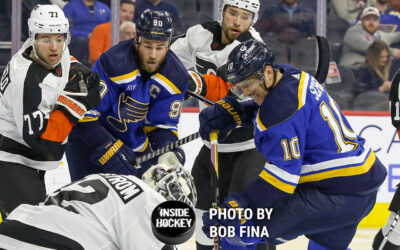