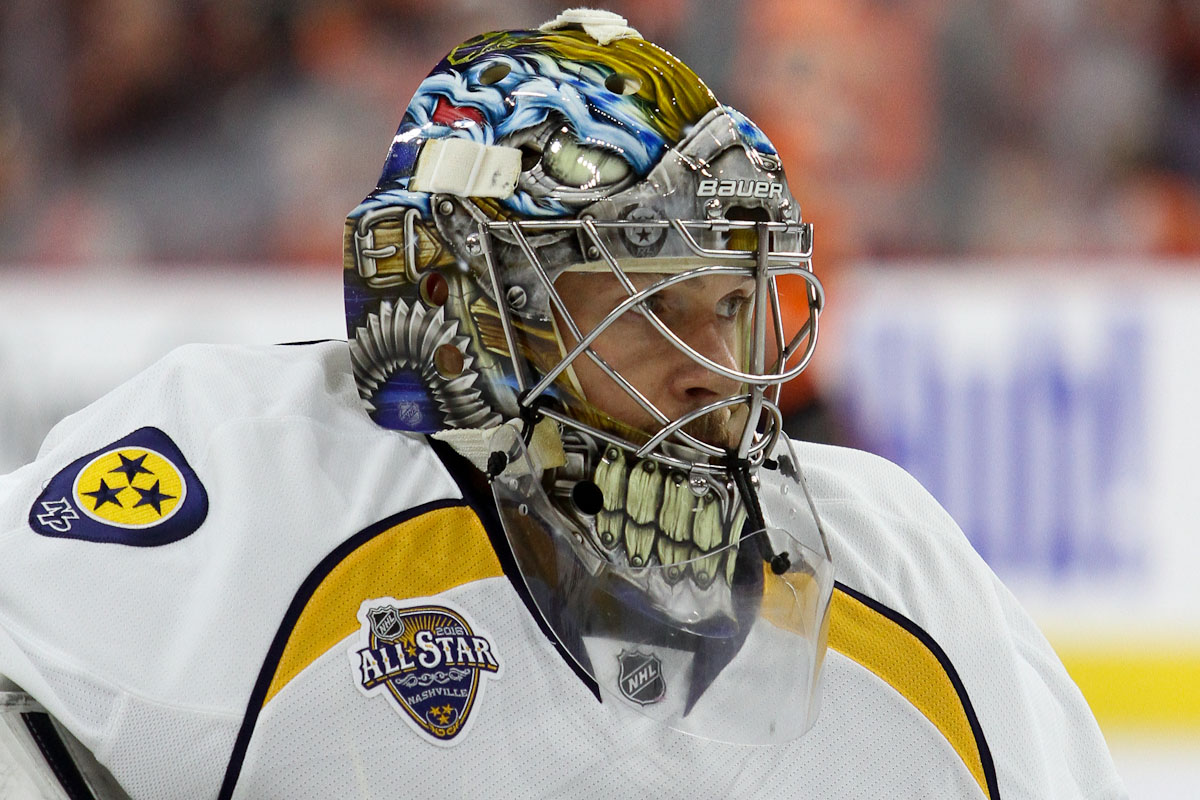 When you’re going up against two goalies who participated in the NHL Stanley Cup Final, the likelihood of beating out the other two candidates is pretty slim, but Pekka Rinne of the Nashville Predators has unquestionably earned his right to be in one of the top three spots for the Vezina Trophy.

The Vezina Trophy is awarded every NHL year to the most outstanding goaltender. Rinne played a crucial role “in securing the Predators’ sixth playoff berth in the past seven seasons by registering career-best totals in all major categories. He started 42 of Nashville’s final 46 games, posting 25 wins in that span and allowing two goals or fewer 28 times. He ranked second among NHL goaltenders in save percentage (.930) and placed third in goals-against average.” (NHL Awards Media Guide)

For Pekka, going up against Roberto Luongo and Tim Thomas, may make him the odd man out to win the Vezina this year, but he still made the trip to Las Vegas, despite the movie “The Hangover” scaring him. Yes, he saw the movie and it scared him about coming to Vegas.

While walking around the Palms, he talked about his Vegas fears, growing up hockey in Finland and being a Nashville Predator.

The Natural Goaltender: The Early Years

Finland is a hard place to compare to any other place in the world. “It was a great place to grow up,” Rinne said as he painted the backdrop to the country he grew up in. “I have a great family, great parents and two sisters. I consider I had a happy childhood. It was pretty regular as far as I know.

“It’s a beautiful country if you’re into outdoors and stuff. There’s lots to do. Obviously, the winter time can be kind of depressing, but on the other hand, the summers are beautiful.”

Not all young hockey players start off at the age of three years old or have big dreams of going to the NHL. For Pekka, hockey is home and family based.

“I was probably five years old,” Pekka said of his first time playing hockey. “My cousin was a goalie. He is seven years older than me. We were always playing street hockey. I would always end up being the goalie. He was the one I always looked up to. I always thought that being a goalie…that it’s a cool thing.

“I didn’t join a team until I was seven years old. Pretty much right away I was a goalie for the team. The team didn’t really have a goalie, so right away, I was more than happy to be a goalie.”

Being a goalie came naturally for Rinne. “It’s something I always wanted to do. A lot of it is because of my cousin.”

Many NHL players grow up dreaming about the day they’ll make it into the NHL. For Pekka, his goals weren’t always so big.

“I never really thought about it too much that someday I’m going to play [in the NHL],” he said of his childhood dreams. “More like a dream, but obviously, the older I get, it became a goal after that. Growing up, I was following the NHL and dreaming about it, but never did I think someday I would be there.”

Growing up, he just wanted to be a pro hockey player. “The best thing I knew was playing pro hockey in Finland. That was my goal.”

That was a goal he reached when he was asked to play for the national team.

“It was a great experience,” he said of playing for the Finnish national team. “I played three tournaments…World Championships for Team Finland. It’s such a big thing back home. It’s way bigger than NHL. It feels crazy to me, because obviously for myself, NHL is the biggest thing. I play for my team, I care about it. For people back home, it’s all about the national team. That is the biggest thing.”

Many pro athletes have a diverse background in sports. They play various sports to perfect their own game in hockey. For Pekka, it was baseball.

“I played a little bit of Finnish baseball which is completely different from [American] baseball. It’s the same ideal, but a little different than soccer.”

With his talents that he generated in his youth, he was drafted 258th overall in the 8th round of the 2004 NHL Entry Draft by the Nashville Predators and signed by the club on August 23, 2005.

From his humble beginnings in Finland, he then made the big leap to American soil.

After coming to America, Pekka headed north to the Milwaukee Admirals in Wisconsin. Moving to a new country can be scary for any young kid. But for Pekka, he had a team to help him get used to America.

“It wasn’t too bad,” he said of learning about the American culture and a new language. “Obviously, in the beginning I was homesick and stuff. I had a great teammate to help me through in Milwaukee.”

“They teach English in schools back home, but obviously my English wasn’t great when I came over. Part of the biggest help for me was I had a Canadian roomie in Milwaukee. That kind of forced me to speak English all of the time.”

“I have great memories from Milwaukee,” he said. “We had a lot of fun. At the same time, when we played, we played hard. When it was time to take it easy, we took it easy. We didn’t really get into any trouble.”

“I didn’t know what to expect,” he said of making the leap to play in the NHL. “Looking back right now, it feels like I’ve changed a lot. I think I’ve grown up a lot, personally and as a player. It was a big change at the time. It was a great change for me. I have to take care of myself and learn a new language.”

“It’s a great city,” he said of Nashville. “Every year it’s getting better and better as far as the fan base. The team is getting better every year. I really enjoy playing there. I think it’s a fun city to live. It’s kind of a small, big city. It has everything you need, but there’s no bad traffic.”

In Nashville, they decided to do something different and fun for Pekka. In all of his years in the US, he had never gone to a drive-thru restaurant. So as a team event, they put him in a drive-thru window at a restaurant to see what it would be like to be a drive-thru attendant.

“It was such a joke,” he said laughing. “They wanted to put me there. I went through a couple of customers. It was pretty funny.”

“They paid me, but I didn’t know how to work the cash register. If they didn’t have the exact amount, they didn’t get anything back.”

“It was kind of funny. They were trying to tease me. It was good.”

Fans of Pekka have not only risen signs in his name, but they have also named their dogs after him. “I don’t know if I should be impressed or what I should think,” he said laughing.

He said it might be one of the two fans that has a new sign for him at the start of every game in Nashville. “There’s a bunny named, Pekka. I guess it’s a good pet name. I thought it was a human name, but now it’s a pet name.”

Unlike the Sedin brothers or the Lundqvist brothers or the Ferraro brothers who made a career in the NHL, Pekka has a twin sister. Unfortunately, she was not able to attend the NHL Awards this year.

“She just gave birth one week ago,” Pekka says smiling. He is an uncle for the first time with a baby nephew (who hasn’t been named as of yet).