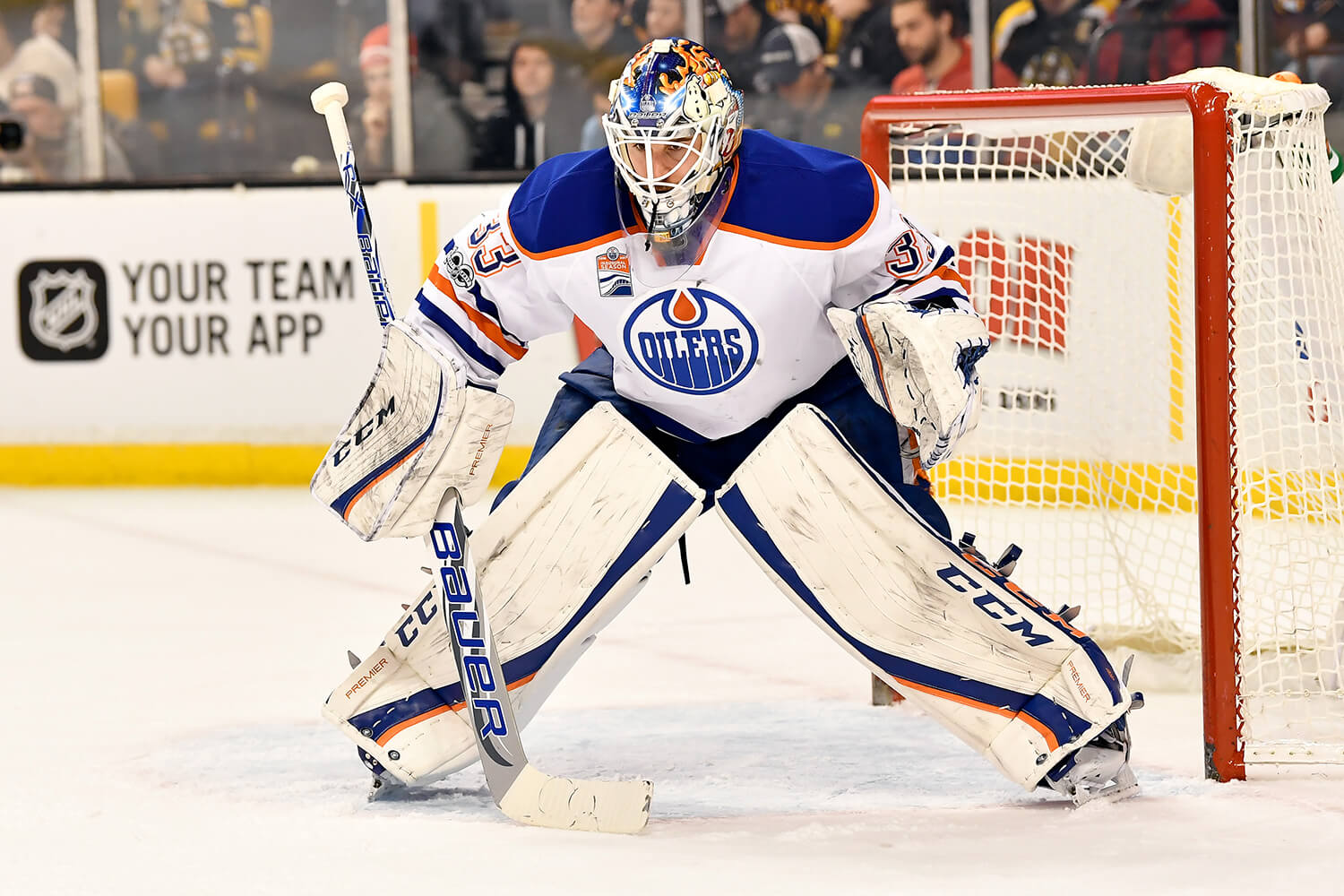 Ken Hitchcock ripped his team in the most direct, least subtle post-game presser I’ve seen in my 600-plus game career covering the NHL after the Oilers lost 4-0 in LA on Saturday. In short, he began by saying that only one person even showed up for the game (Darnell Nurse) and finished by saying, “It’s not acceptable.”

He can do that. Hitchcock is playing with house money. His career went into retirement mode in St. Louis what—two years ago?—and then was resurrected by a second crack in Dallas last year. That didn’t work out, and he was again in line for shuffleboard at the Senior Centre nearby his home, wherever that might be.

Anyway, playoffs equal miracle, anything less equals “what else do you expect with a start like that?” So, he can say what he wants, and he did on Saturday evening.

He does have some respect, though, as he commented as he left the hallway where the press comments were made, “I better stop now. I’m going to get into even worse trouble,” or something roughly equivalent.

I’m a bit surprised, actually, reading through the press clippings at the Ducks’ game Sunday  at 5pm, most of which concentrate on yesterday’s (Saturday) Edmonton fiasco in LA, that the Edmonton press was all aboard the Hitchcock train after that speech. They see what I saw—that the Oilers were terrible in every respect, and that nothing but turnovers, bad goaltending, and no shots characterized their non-effort in the City of Angels.

Would they be better in Anaheim? They were playing a better team, and Hitchcock did say that the squad responds to embarrassing losses.

The Oilers surged out to the same lead the Kings had had on them a night before—3-0—in the first period. The third goal was a shorthanded effort on a two-on-two.

Coach Hitchcock explained it simply: “We went into the red zone, and we went into the blue paint way more, and we just put pucks in there and scored three goals because of the loose garbage that we were able to pick up.”

Were they that much better than a Ducks team which is undoubtedly the better SoCal squad when measured against the Kings?

Sort of. The Ducks started well, with pressure from their checking line, playing against the McDavid combo (Jujhar Khaira and Zack Kassian). But they didn’t score early, and the Oilers took over as the first few minutes wound into history.

It was the start, the flurry at the first, that attracted the most commentary by goalie Talbot after the game.

“I had to come up with a few big saves early, and that obviously gets the confidence going.” He cited McDavid’s first goal and said, “We never really looked back from there, and we just kept piling them on in the first.” He called it a game that allows the team to build off. (But what else is he going to say, especially when every question from the Edmonton internet reporter dude was answerable mostly (only) by clichés?).

Talbot said more about the start. “I was just trying to build off of coming in last game . . . .  The first three or four shots were all A-grade chances, in front. Any time you’re able to make those saves to start the game, it obviously building confidence moving forward, and it gives the boys confidence to go down there and do what they need to do at the other end.”

Anaheim needed better, being mired in their second seven-game losing streak of the year at 0-5-2. They had some hope in that offensive defenseman Cam Fowler was set to return from a 23-game absence after taking a puck to the face. He would play 22 minutes, second behind Hampus Lindolm at just over 23.

Would they come back from three goals down, though? Their scoring average per game is around 2.4, which puts them 30thin the league. Only the Kings are worse, trailing at 2.21 GPG.

In fact, they got further behind as the second period went on, though the Ducks poured it on. They outshot the Oilers 17-6 in the frame. Draisaitl scored for Edmonton at 7:25, however.

The Anaheim strategy was to activate the defense. Often they had both defensemen involved in the offense, below—and at moments well below—the tops of the faceoff circles. Many times, they had good chances. Two numbers which seemed to stick out were 20 and 25, those belonging to Pontus Aberg and Ondrej Kase respectively. They play with Getzlaf.

Side note: Rakell was supposed to be returning from an ankle sprain to play on that line after missing 12 games, but he didn’t go, or he would have been on this top line.

Anyway, those three players were frequently visible. Early on in P2, Aberg and Kase put the puck to the net in a crowd, for instance. But they couldn’t get one to land in the net.

As mentioned, the Oilers stretched their lead, scoring their fourth goal on a play where it was practically in their net one minute, and all the way down the ice and into the Anaheim net the next. After the goal, there was a scrum, the second of the night and not to be the last. Draisaitl and Getzlaf ended up locked up, skating around, but the Oiler wouldn’t respond to what seemed to an invitation to fight the Anaheim captain.

The goal came on a broken play where it went off a leg and right to Draisaitl, who shot right away. Gibson was nowhere near in the right place—not his fault due to the deflection.

Back to Aberg and Kase: with about eight minutes left, they kept it in the zone a long time. No result.

The third scrum of the game came shortly after, when Lindholm cross-checked McDavid into the boards in the Anaheim end and Joseph Gambardella came to his aid.

The Ducks kept pressing. Welenski shot the puck cross-wise to the net with Brian Gibbons crashing. The latter got a stick on the puck, backhanded, while falling. It hit Cam Talbot’s pad. Gibbons just after got a wrap-around chance. The goalie was there.

The Oilers had a further chance when Cam Fowler got all turned around and lost two men—Draisaitl and McDavid. Gibson bailed him out with a leg save.

As the period ended, another scrum. This time Kassian and Nick Ritchie were involved. In the old days, and especially with the lead for the visitors at 4-0, this game would have turned into a fist-fest. There’d be no coming back, and enough crap and bad words had been exchanged to make that possible. But . . .

. . . nothing so interesting would happen in the third. Instead, it was eight Anaheim shots to five Oilers ones, and no scoring. The only penalties were inconsequential—Puljuvarvi threw a puck over the glass, and Welinski cross-checked an Oiler into the boards to no great effect.

Randy Carlyle of the Ducks would describe his group after the game by saying, “There’s been frustration that’s been developing and it’s very, very evident in our group.”  He switched up his lines to try to get something going.

Getzlaf and Kase got Ritchie on their trio. Aberg dropped down to play with Sprong and Henrique. Cogliano found himself alongside Sherwood and Rowney. All of this provided exciting play where Anaheim poured on the appearance of offense. But all of that offense came in the form of pucks off shin pads or skittering past the net. They didn’t get a goal.

In fact, the Ducks dominated the period, despite the relatively low shot total. They buzzed and crashed and were all over the net, putting pucks there time and again only to see them hit legs and make odd bounces off into corners. That, too, achieved some notice from Carlyle:

“When you have glorious opportunities time after time, and it hits the shaft of a stick or it hits a post, or it’s wavering on the goal line and it doesn’t go across. Well, at some point, if you continue to work, those things have to turn in your favor. That’s what we have to stick with.”

Carlyle summed up what the Ducks need as they try to stay in playoff position: “We have to focus on the process. You be more realistic and be yourself. The coaching staff has to be readily available. You’re not running and hiding and you’re not yelling and screaming. This is matter-of-fact. We’ve got a job to do, and we’ve got to provide a plan for our players, and support them. That’s the bottom line. And show leadership.”

They’ll see Ottawa and Pittsburgh on Wednesday and Friday to see how well they have been able to take these thoughts to heart.