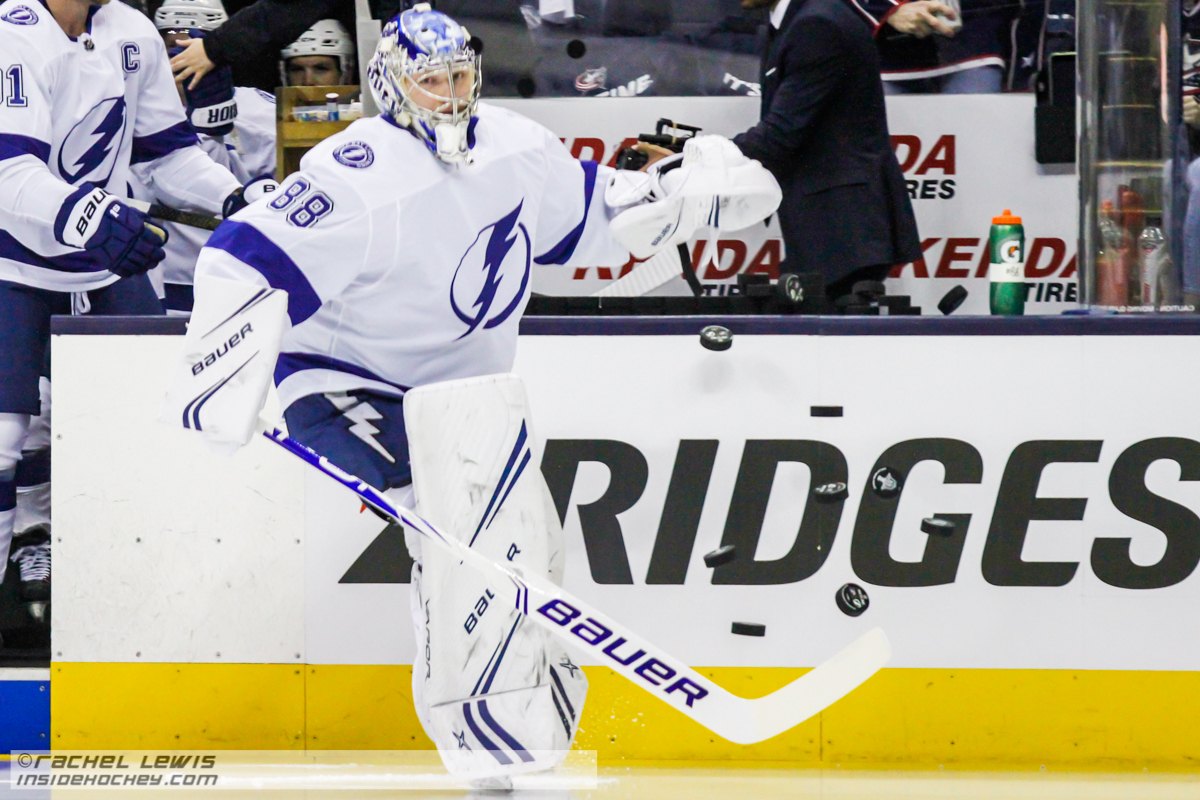 TAMPA – Given history, who would bet against Tampa Bay Lightning goalie Andrei Vasilevskiy going to the Lightning’s 1-0 win in Wednesday night’s Game 5 as Tampa Bay captured the Stanley Cup?

Vasilevskiy turned away 22 shots and had an amazing defense in front of him as they blocked nine shot as the Lightning dispatched Montreal Canadiens to complete the task of winning back-to-back Stanley Cup championship.

“Vasy is just a competitor and is never satisfied and he always battles to become better,” said Tampa Bay defenseman Victor Hedman. “I don’t know what it is about those Russian kids but they’re just warriors – Kuch (Nikita Kucherov), Serge (Mikhail Sergachev), Vasy. They work their asses off all the time and try to be difference makers.”

Defenseman Pat Maroon admitted he was fighting back tears as the Lightning killed off the Canadiens’ 6-on-5 empty net attack on the last two and a half minutes of the third period. He was full of praise for how Vasilevskiy consistently plays and how he quieted Montreal in Game 5.

“His numbers show when there is a loss and you come back to a game the numbers are unbelievable,” commented Maroon. “He competes unbelievably every single night and his work ethic is out of control. You guys don’t see that side of it when we are at the rink, how he competes and how he takes care of himself.”

“I can’t believe how he shuts the door in the biggest games of his career. What is it five now? He’s the ‘Big Cat’ and when he locks in, he is remarkable to watch. Let’s be honest. The best goalie in my era is the goalie we just went against (Carey Price) and the best goalie in the next generation is the goalie who just won the Stanley Cup. Hockey fans were privileged to watch two generational goalies play tonight. A torch has been passed. He’s a luxury for us.” – Lightning coach John Cooper

Kucherov, who took over the new conference as he made his part an amusing stand up routine, chided the NHL for not presenting Vasilevskiy with the Vezina Trophy for the second season in a row.

“He is a really humble guy,” said Kucherov. “He doesn’t want people near him to say he’s the best, but he’s the best. He keeps working even though he is getting rubbed every year by the NHL – not getting the Vezina. If he played in a different market he would win this Vezina every year.”

Vasilevskiy had some incredible defense in front of him as Erik Cernak played a key role in helping Montreal stay off the board.

Early in the third period, the Canadiens’ Josh Anderson had broken free up the ice and it looked like he might challenge the vaunted goalie, one-on-one. It didn’t happen as Cernak reached around him with his stick and knocked the puck free and he knocked Anderson to the ice.

“Obviously the whole team deserves it for sure,” said Vasilevskiy. “Just to have five shutouts in one playoff is all about team. It’s not about me its about the team.”

Barclay Goodrow also had three blocked shots. In the second period he threw his body in front of the puck and a shot hit off his ankle and kicked back through the air into the other end of the ice. The effort and selflessness were amazing.

Oh, and the lone goal: Ross Colton finally broke through at 13:27 in the second when Ryan McDonough dug a puck out along the boards and brought it to the circle. He made a pass to the right side where David Savard immediately fired a touch pass to Colton, who pushed it past Cary Price for a 1-0 Lightning lead.

The angle of the scoring pass was set up when McDonough hit Savard in the middle of the right circle. He then connected with Colton under the sticks of both Ben Chiarot and Joel Edmundson. It was Colton’s fourth goal of the playoffs as Savard and McDonough connected on their fifth and eighth assists.

Kuch-Mode: Kucherov scored 32 points in the Lightning’s 23 playoff games after missing the entire regular season with a lower body injury. His leadership footwork, puck-handling ability and pure skill were amazing once again.

“The guy is a special, special player,” said Blake Coleman. “He is a big reason why we are here celebrating. He is a great teammate, great player, great friend. He played through some pretty grueling injuries in the postseason. That’s not skill. That’s all heart.”

Comedian to be?: Kucherov held his news conference shirtless after the game as he took swigs of beer and had everyone around him in tears. He had words for the Canadiens fans in Bell Center after Game 4.

“We want the Cup” chants: Tampa Bay won in the bubble last season, so now their fans would get the chants to enjoy the second season etched in NHL royalty. They started early in the third period and the players and coaches all mentioned the fan base known as “The Thunder”.

“You never forget your first, but we were missing this and we didn’t get to share it with not only our fans, but also Florida, Carolina, the Islanders and in Montreal,” said Cooper, who was a prosecuting attorney before becoming a hockey coach. “It was amazing to have fans in the building. It’s like winning two different Stanley Cups and that’s what makes it special for us.”

Cooper noted the poetic justice of owner Jeff Vinik being about to be on hand to see the Lightning bring home the Stanley Cup. Last season Vinik stayed with his family rather than quarantine and stay in the bubble. For Game 4, he would have missed the final game as the family had a wedding celebration to attend in Newport, R.I.

“The big one for me was the Vinik family being there,” he said. “He wasn’t able to be in the bubble and he couldn’t come to Montreal for Game 4. The script was written and for Jeff to be here and for him to be able to enjoy this in front of the creation he built and in front of the fan base that has passionately followed our team. The smile on his face, that was it.”

What’s Next?: The Lightning were only $3 million over the salary cap, so it’s uncertain how they will have to tweak the roster. There will be some subtractions and that wasn’t lost on the players as they went further into the postseason.

“We know going forward with the salary cap world it might be the last game this particular group plays together,” said Steven Stamkos. I can’t say how much that motivated us. We talked about it midway through the playoffs. We talked about it going into Game 5 in the Islanders series. ‘Let’s take advantage of this opportunity.’ It’s not very often you get to play together with this talented of a team like we did.”