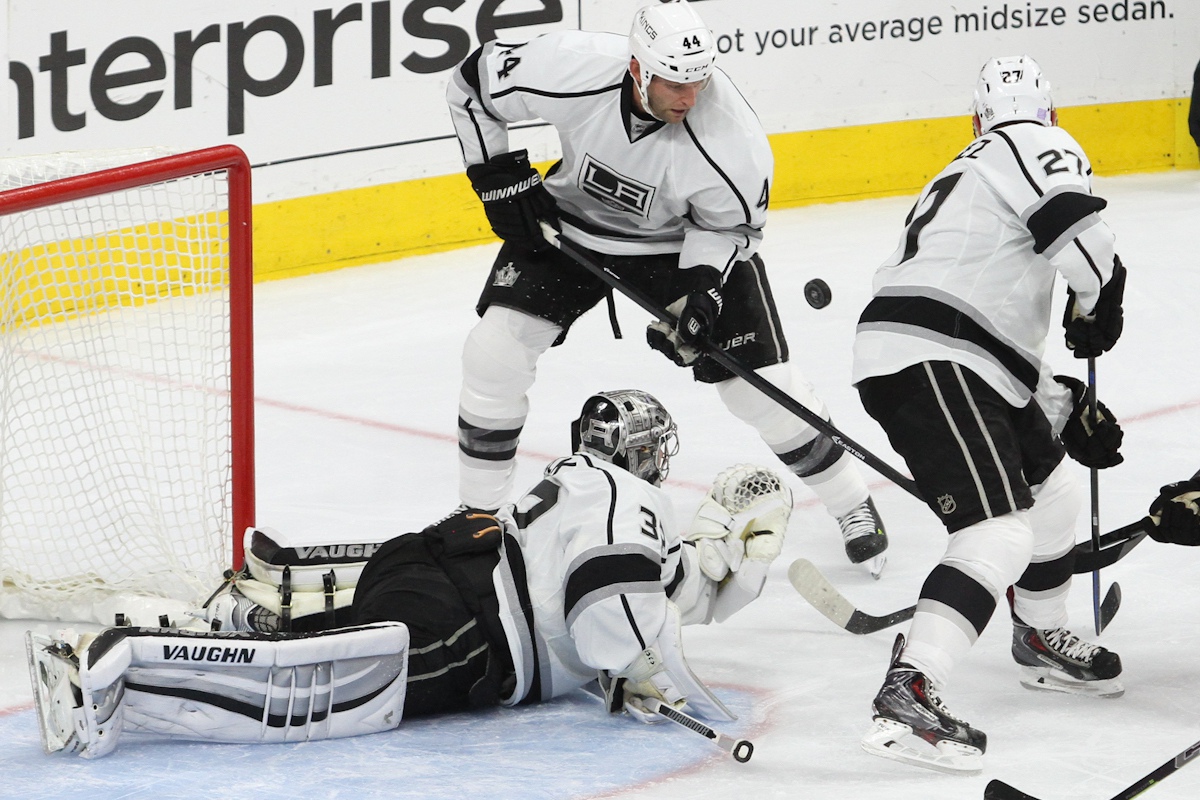 You know that saying, “Fifty is the new forty”? How about “red is the new black?” What about “Vancouver is the new Toronto”? In hockey terms, that’s just what’s happening. Here’s what I mean.

Year after year, the Leafs’ games are played with promising underachievers. But every year, at some point, they win a few games. Suddenly, the fans and media have them as making an unlikely playoff run. They never manage to do that, because they seldom make the playoffs.

But the hopes, hopes against hope, persist. The same thing is happening in Vancouver right now with the team having put on a bit of an early run. Witness the headlines in the Vancouver papers over the past week: “Miller the Magnificent,” “Miller’s Methodical Milestone,” New Canucks Recast from Misfits to Perfect Fits.” So much excitement. So much optimism. So far to fall.

Sure, they’re up there just nudged beneath Anaheim in the Pacific, having played one less than the Ducks until Saturday, when they were in LA for the Kings. The thing was, for all the accolades and wins, their goalie, Ryan Miller, isn’t exactly at the top of the league, numbers-wise, amongst goalies. His GAA at 2.19 (coming into Saturday) isn’t even in the top ten, with tenth place being held down by Fleury in Pittsburgh with a 1.99. His save percentage likewise was sub-tenth, with the tenth-place guy, Michal Neuvirth, having a .929, as does Jonas Hiller. Miller’s was .920.

So if the goalie’s not amazing, but the team is winning, what’s going on? The Canucks are scoring. They had let in 38 goals coming into LA, more than the other top four teams in their Division. But they had scored 46, more than any team in the Western Conference, and third in the league. Pittsburgh, the top team, had 49.

Who’s getting all those goals, and how is it that it never occurred to anyone, in the decade-long (OK, more like a year and a half, but it felt like ten) will-they-ever-shut-up world of “What do we do with Luongo?” that it didn’t matter how he played, or who succeeded him, as long as the team scored a ton and thus won most of their games.

You get that that’s rhetorical, right?

The goals are coming from Nick Bonino and Radim Vrbata. And if you compare the Vancouver lineup to LA’s, you’ll find that the following players had more goals coming into the game Saturday than any of Marian Gaborik, Anze Kopitar, Mike Richards, Justin Williams, Dustin Brown, or the entire LA defense: Linden Vey, Brad Richardson, Daniel Sedin, Henrik Sedin, Alexander Edler, and Jannik Hansen. Right. Plus Bonino and Vrbata. So with that many guys scoring that much more than the opposition, it’s no wonder the Canucks are winning. But could they do it once more in LA?

Before that answer, a bit of trivia. Of that list of Vancouver players, a couple have LA ties. Vey, drafted by the Kings and with three seasons toiling in their Manchester farm operation. And Richardson, who played more than half of his NHL games with the Kings before he went to Vancouver in July of 2013 as a free agent. Last year, he had 11 goals and 23 points in 73 games. This year coming into Saturday, he had six points on three goals in 14, so about on pace.

Also with SoCal ties, but to the enemy next door as far as LA fans are concerned—Bonino, who played four seasons with the Ducks and their AHL affiliate. This year, he has about a point a game streak going, 12 in the first 14 games, but that’s not his career average. He has 94 points in 203 games, which is less than .5ppg, obviously.

Speaking of not to form, Vrbata, is 13 points for the first 14 games. That’s pretty close to one-to-one as far as ratio is concerned, but in his career, he’s played over 800 games with under 500 points. Those who study the stock market will quickly do that math as .625 ppg, and that puts him at what, about 50 for the season? By that measure, he’s only good for around 35 more. And if he cools off and Bonino returns to form—which is solid and useful, no critique intended to him—then who’s going to right the ship of a team that lets in as many goals as the Canucks?

Not Magic Man Miller. And not Saturday night, as he was in a 3-0 hole after one period and a 4-0 hole after two. Not much of it was his fault, although the Kings’ third goal, by Kopitar with about two minutes left in the first period, was from a sharp angle and went long side up and over the goalie’s head or shoulder. By the end of two, the Kings were ahead 22-13 in shots, and Coach Desjardins of Vancouver had seen enough of Miller. Eddie Lack started the third.

But the goaltending position was not to blame. In front of Miller, the team did zip as far as offense went. Or even as far as organization went. As period two went along, it was more and more clear that whatever plan the Canucks work on offense most nights, they weren’t going to do it against a tightly disciplined LA team. But that’s not because the Kings played a lot of defense, as they are commonly found doing. Rather, it was that they swallowed the puck and headed up ice whenever the Canucks even got a moment in the offensive zone.

About the only good chance came when Dan Hamhuis found himself near the edge of the crease and managed to shoot a puck up and past Quick on the far side, wide.

The Kings, meanwhile, were not generating a million shots, but they were doing all they needed to move the puck. Jeff Carter, to cite just one, had an end-to-end rush on one shift, entering the zone from the left side and working to the net with a player trailing him. He deked and went wide but didn’t make it to the goalmouth, deciding, it appeared, that with a 4-0 lead, a kamikaze move was not needed.

On that same shift, he was back in his own end and picked up another puck, this time rushing it up the opposite side of the ice. Again it came to nothing, but all that time, while he was holding the puck, Vancouver wasn’t. And that’s kind of how it went for the rest of the evening. The Canucks managed a goal to end the scoring on the night, but after it was 5-0 for LA.

To cite a fact that played into the larger picture of what’s going on with the Kings—the team had 20 players dressed, but with Robyn Regehr having left practice early on Friday with an injury that has not been explained to outsiders, the team had just five defensemen in town. They could have pulled a guy from Manchester, or even their best Ontario (California) prospect, Alex Roach, but the salary cap made that impossible. Of course, this has everything to do with $4-million dollar defenseman Voynov having been suspended by the league, which hasn’t yet offered any kind of alternative deal to the team to deal with his ongoing salary cap hit. Thus against Vancouver, they had 5 D and 13 forwards.

The lines were super-consistent all night long until the end of period two. Then, Kyle Clifford went down in a scrum behind the Vancouver net and went to the bench. In his place to play with Lewis and Stoll came Jordan Nolan. Get this: two nights ago with the Isles in town, Nolan played most of the night on the top line. Now, he had sat on the bench all night long until this moment, when he got a 37-second shift, his first. He would get one more in the second, to end the night with 1:19 of playing time.

Meanwhile, the defense pairings were all over the place, as would happen with an odd number of guys dressed to fill an even number of slots. Here’s a look at some of what I noticed: Drew Doughty, the minutes-muncher of the group, played mostly with Muzzin. But the latter was also on with McNabb. McNabb played mostly with Martinez, but Martinez also found himself with Greene. Then there was Greene and McNabb as a pair. In other words, you never knew exactly what you were going to get, but one thing that was certain was that Doughty and Muzzin were going to be out a ton. Through one, the former had 11 minutes, the latter eight. Through two, it was 21 and 15. At the end, it looked like this: Doughty with just shy of 30 and Muzzin with more than 25. Martinez had about the same as Muzzin.

After the game, Coach Sutter said that he would expect Doughty to absorb these minutes, but that the other four were tested.  “You need a lead to be able to do that,” he said. “Otherwise, you’re probably not saying it looked so good.”

Of course, with a large lead, the coach got the chance to spell his guys a bit. In fact, with the lead guys on the top two lines being Kopitar and Carter, and the third line consisting of Richards, Brown, and King and the fourth of Clifford, Lewis, and Stoll, the four lines seemed to play about equal time, with the latter two standing up quite a bit as the game went on.

Vancouver never got any better after the game got away from them. Vey put a puck in the slot and Higgins ran onto it an managed to propel it past Quick, but that was their offense. They had 19 shots to LA’s 36, and that was with the Kings taking five penalties to the Canucks’ three.

So whatever magic there is in Vancouver, it may be cooling, and the excitement tending to hyperbole which surrounds the team might end up looking kind of silly a month from now.

What’s next? The LA team probably hopes for a combination of health and news from the league as to the mitigation of the Voynov situation. Schedule-wise, LA plays in Anaheim Wednesday, has Dallas at home Thursday, then sees Anaheim once more on Saturday, mid-day.

Vancouver, meanwhile, has no time to recoup, as they will be on a bus to Anaheim long before you read this and meet the Ducks at 6pm on Sunday evening. They had a two-game winning streak going and had won five of six. That’s over now.