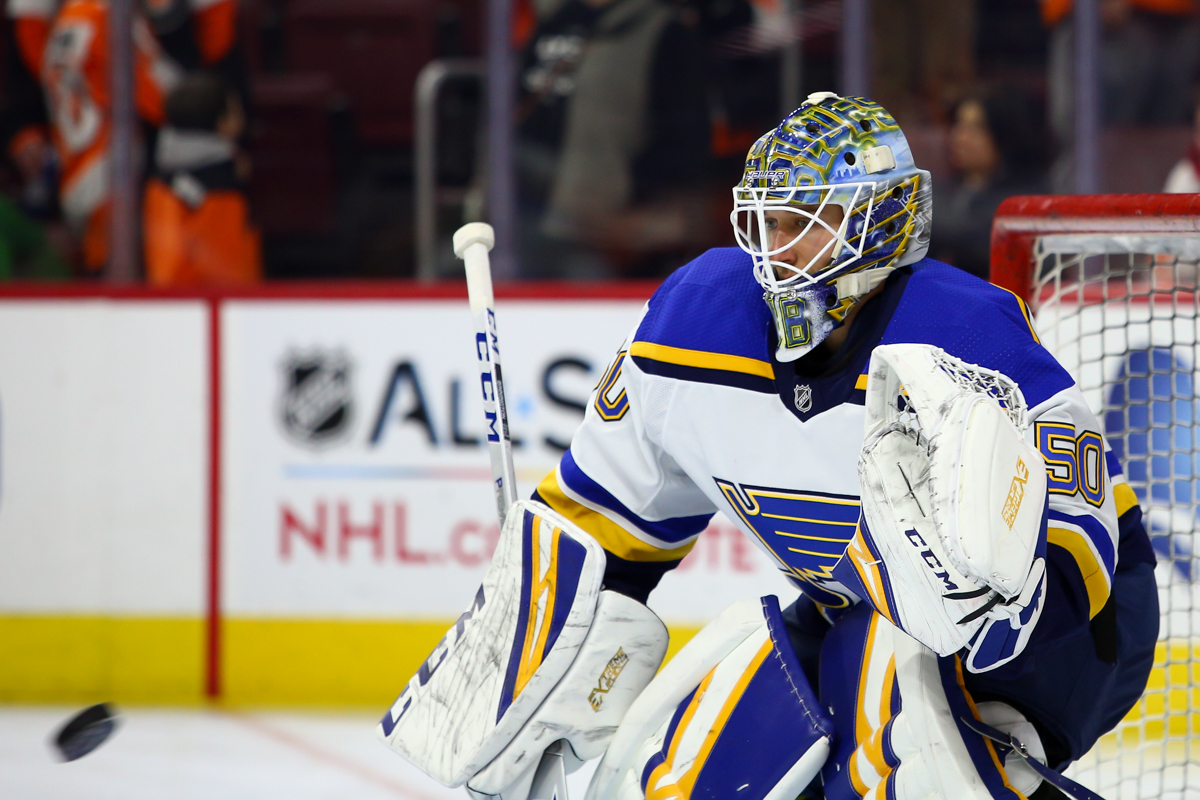 Having survived an almost epic losing streak, a run so bad that the GM had to publically say that the coach would not be fired as a result, the Ducks picked up a couple of victories before losing one to the Islanders on the weekend. But they were a chastened bunch, a group who vowed not to allow the season to slip away.

They totally ignored that resolve Wednesday night with St. Louis in town, turning in the worst performance in memory, a game described by Captain Getzlaf with one word: “Uninspired.”

“There’s no reason for it. No excuse for it,” he said.  When asked if he could park things during the break, he said, “It’s too hard to park things like that. We’ve been doing that for a month already. I’m pissed off and frustrated. It’s really, really frustrating to understand that our group’s in a playoff race still after everything and realize that we can’t come out and compete hard, around our net, around their net, and do things like we did them tonight.”

It was so bad, and there’s apparently so much anger, that they didn’t let us in the room after. They brought the team’s leaders, first Getzlaf, and then Fowler, out to the hallway instead. The official explanation was that they were telling a number of players they were being sent down to San Diego and didn’t want to delay the media interviews for that, but I’ve never noticed an NHL team worry about the media and their schedule before.

“Never, never had it in fourteen years here. Never had that feeling that we’re not going to compete on a daily basis,” Getzlaf said.

If the team was supposed to start strong, they  lazed into the game, allowing at least two point-blank chances in the first couple of minutes. John Gibson kept them alive. The Blues rushed the zone at two minutes, Vince Dunn shooting the puck off Gibson and Zach Sanford getting the rebound. Another save.

Five minutes were gone when St.  Louis fed a puck from behind the Anaheim net and Sammy Blais got a great blast off. Another save.

Those names don’t sound familiar to non-Blues fans, right? That’s because everyone up and down the Blues’ lineup was contributing. The team had nine shots before the Ducks had any. The closest they could get was a Montour rush that didn’t result in a shot

Lucky for the Ducks, they scored, on their first shot. It was Daniel Sprong, who came in from the top of the circle dusting the puck off, back and forth, and then, with nobody marking him, shot it up and over Jordan Binnington.

Maybe they had their angels with them. It was, after all, Angels night. Shohei Ohtani and two other baseball pros dropped the first puck. Up in the press box, the Japanese media were out in force. What they saw was the product of good goaltending and puck luck, to this point. What they would end  up seeing is a game hardly worthy of the name “NHL hockey.”

Getzlaf was to confirm that as he finished his comments: “We’ve got to play and compete. As a group. As five-man units. As a collective group we’re not playing hard enough to compete in this league.”

As period one went on, the Blues kept after it. Gibson kept making stops. The Blues finally got their first goal at 10:34 when Getzlaf went behind the net, dumped a puck too softly behind him for Cam Fowler to get, then saw Brayden Schenn pass it to Vladimir Tarasenko for the shot.

They didn’t stop. Carl Gunnarsson tossed a long pass to Mackenzie MacEachern, who took it to the net and took a snapshot. Gibson again.

Finally they got rewarded, as noted. The shots should have gotten the Ducks chewed out between periods: 13-2. The score was knotted at ones. The Ducks ended the period this way: they left the front of their net unguarded as the period was in its last minute. Jaden Schwartz came in alone and shot high, hitting the crossbar.

The Anaheim team has suffered from injury trouble as long as anyone can remember. Most recently, it looked like things were getting better, as Corey Perry has been skating this week, and Patrick Eaves is in the AHL getting ready to come back to the NHL team. Ryan Miller is back on his skates, too. But Ondrej Kase, who played on the first line much of the year, is out for probably six months with a shoulder injury.

They coulda used him and his team-leading 11 goals, especially since they had no defense. The pair of Michael del Zotto and Andy Welinski were particularly bad, never back marking their men, and responsible in part for the second and third St. Louis goals, plus other chances. It was like they weren’t even there. No movement of the feet. In too deep to get the man coming to the net. Really a mess. But you can’t blame a loss on your fifth and sixth defensemen, can you?

Cam Fowler was similar to Getzlaf in his comments. “You guys watched the game. I don’t know that I have much to say. One of the worst games I’ve been a part of. Leave it at that.”

The Ducks, to be fair, started the second period with a bit of a flurry. Not in shots. But in action. The puck, though seemed to fly around and past the net, anywhere but on net. The early shots in P2 were 2-2. It only got worse. They would end 26-9 in total or 13-7 in the frame.

Exacerbating the problem, the Anaheim defense seemed to have been given the green light, which is exciting to watch, but not if you’re John Gibson, who was tested over and over again because his D were nowhere to be found.

Just one example: Pat Maroon carried it all the way down the ice and backhanded it out to the slot for Oskar Sundqvist to put in. Goal three.

The Ducks’ lineup was at least resplendent of some rookies: line three featured Max Jones and Troy Terry on wings. Line four had Adam Cracknell and Sam Carrick on the wings. Cracknell is a trade product from the Leafs, acquired on the 10thof December. He has been with the AHL Gulls since then, playing 13 games and scoring 6 goals and 7 assists.

Anaheim had Getzlaf accompanied by Devin Shore, acquired from Dallas last week, and Daniel Sprong. The second line was missing Kesler and thus had Henrique at center and Rakell on the wing along with Ritchie. The logic there seems to be that with Silfverberg out, it’s best to distribute the strength between the top two lines. All this did was weaken Getzlaf, who can’t work alone. Maybe GM Murray wants Shore to be more than he is.

The third period featured two more even-strength goals by St. Louis, less than a minute apart. The Ducks got four shots in the period. St. Louis had six to complete their 5-1 victory.

Fowler said, “It’s just been a tough time.” He would add, “This whole month has been hard emotionally. It’s just been difficult. Like, we have a great group of guys. We have all the pieces we need. We just can’t seem to find our way right now. . . . It wears on you. This is our livelihood, so physically and mentally, it wears on you.”

Carlyle is out of ideas. “They seemed to be a step and a half quicker than we were in most of the situations we were presented with. . . . They had more jump and more energy, and we didn’t have the puck,” he said.

But he is also angry. “Right now the emotions are running pretty high, and I don’t want to say something that will get me in any kind of situation where I say something I shouldn’t say. The bottom line is, we had a team come in here and outwork our hockey club tonight, and we’re not going to accept that.”

He was especially surprised that this game replicated the one in Long Island on the weekend. “The last game we played was very similar to the game we played here tonight. On Long Island, they were quicker and faster than we were, and that’s the alarming point. We were back home and usually this building has been good to us.”

The crowd, by this point thinned to a few thousand, booed the Ducks off the ice.

Three times in the past, Anaheim has had a low of 12 shots, all on the road. No official word, but very likely this game ties or sets the record for the lowest shots on goal in a home game at 13.

Gibson, who heads up north for the weekend’s All-Star festivities, was pulled with about ten minutes to play. No blame on him. He was quite good. Rest. Sparing his GAA. Making a point for the benefit of his teammates perhaps.

The team next plays a five-game road trip. They don’t return to their arena until mid-February, by  which time, their fate for the season will be apparent. Before that, expect changes. Wholesale ones? Who knows. But the Ducks have definitely, positively hit bottom. It can’t get worse than 13 shots on goal and no meaningful team play.

This loss continues a prior six-game home losing streak.