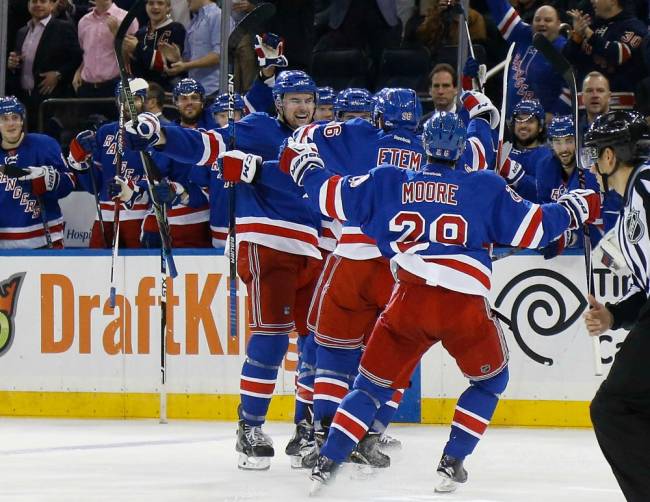 NEW YORK – The Undertaker – no, not that Undertaker — helped the Rangers bury the Oilers Tuesday night at Madison Square Garden.

Dylan McIlrath, who earned his nickname because of his penchant for physicality and fisticuffs, scored his first-career goal, a second-period blast from the point, while fellow rookie defenseman Brady Skjei made his NHL debut as the Rangers got back on the right track by defeating Edmonton, 4-2.

“It was unbelievable. It was a long time coming. I was pretty close the last few games, getting my shots off. Very thankful it went in tonight,” McIlrath said in the victorious Rangers dressing room. “Honestly, I just tried to bear down and get it clean off my stick. Didn’t really register until I saw the reaction on some guys’ faces, and then I got pretty pumped there.”

“It was definitely coming,” said goaltender Henrik Lundqvist of McIlrath’s goal. “He has a really hard shot and I’ve felt it a lot in practice. I’m happy for him. I think he’s playing really well right now. I think he looks really comfortable and confident. He’s growing in each game and it’s huge for us right now. Guys are out, we need guys to step up, and he’s definitely doing it.”

“I love watching those – you don’t get to see those all the time, and he deserved it,” said defenseman Marc Staal. “He’s worked extremely hard to get here, and he’s been playing really well and taking advantage of it.”

McIlrath played in his seventh straight game after appearing in just six of the Rangers’ first 25 contests. He continues to impress in his decision-making with and without the puck, and skated 18:38 while being paired with veteran defenseman Keith Yandle.

Skjei spent the majority of the game paired with 18-year veteran Dan Boyle, who debuted in the NHL when the 21-year-old Skjei was just four years old.

He played well above his years. Skjei displayed poise, including an acute set of hockey smarts and instincts. During a mostly-positive performance, his only blemish came when he whiffed on a pass in the second period, allowing Oilers star Jordan Eberle a breakaway goal that briefly tied the game at 2.

“I thought for Brady’s first game, considering the stage, I thought he did a good job,” said coach Alain Vigneault. “Obviously he had that turnover in the second period there, but I’m assuming that won’t be his last mistake in this league. I’m also assuming he’s going to make a lot of good plays.”

“A lot of guys in the locker room came up to me before the game and said just to have fun with it,” Skjei said. “They’ve all been there. I had some nerves coming into the game – probably more excited than nervous, but I just tried to relax and play my game.”

The Rangers’ No. 1 draft pick in the 2012 draft, Skjei is one of four straight first-round selections by the team to be currently on the roster, joining Chris Kreider (2009), McIlrath (2010), and J.T. Miller (2011). It’s the first time since Apr. 5, 1978 first-round draft picks from four straight drafts were all on the ice in the same game for the Rangers.

“He’s here for a reason,” McIlrath said of Skjei. “He’s an unbelievable player. I got to see it first-hand last year when he came up with [Hartford]. He’s going to have a long career in this league, and I hope he enjoyed tonight.”

The Rangers had been 2-6-2 over their previous ten games, including a winless three-game road trip in Western Canada.