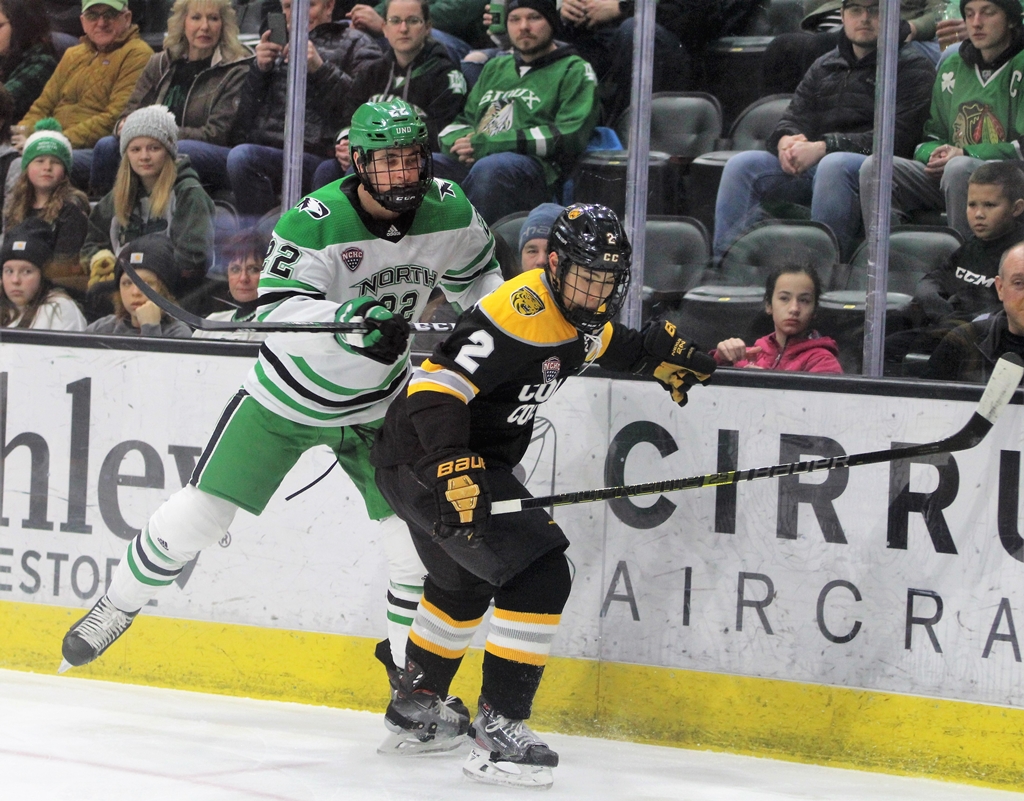 For the first time in 329 days, the University of North Dakota hockey team played a game in their home arena. Entering tonight’s game, UND was one of five teams that had yet to play a game on their home ice. The Fighting Hawks were grateful to be back on home ice and to have actual fans sitting in the stands.

“When you’re away from this place as long as we have been, it just gives you more of an appreciation for what you have here,” UND head coach Brad Berry said.

“It was unbelievable,” captain Jordan Kawaguchi said,  “Obviously we didn’t have full capacity tonight, but it kind of felt like it, just to be back in front of fans.

“Yeah, it was special,” sophomore forward Shane Pinto said. “We’ve been waiting for 11 months, and to finally have the Ralph buzzing, again, the 3,000 fans that were here, they brought a lot of energy. It was awesome. We really enjoyed it. So, it’s good we got the win for them.”

The fans that attended the game weren’t disappointed. The hometown Hawks put on a good show beating the Colorado College Tigers 4-1.

From the drop of the first puck to the final horn, the Hawks dominated the Tigers. The Hawks came in waves. If not for the Tigers freshman goalie Dominic Basse (he stopped 36-of-40 shots), the score would have been more one-sided. In the first period, UND outshot CC 19-5. For the game, UND outshot CC 40-19.

The Hawks have developed a simple game plan and it’s been successful.

“We’ve just been attacking teams and getting on them quick,” Pinto said. “We’re just keeping it simple. Our team has done a great job of getting point shots through. We’re crashing the net. On the power play, we’re not looking for anything too fancy. We’re just getting pucks to the net. Keep doing that, and hopefully, more will go in.”

This season the Hawks have gotten a balanced scoring attack. Against the Tigers, it was no different. Freshman defenseman Cooper Moore would give the Hawks a 1-0 lead at the 14:26 mark of the first period.

Thirty-five seconds into the second period, the Hawks power play brought the fans out of their seats with a tick-tack-toe goal. It was reminiscent of Nick Schmatz’s goal against the Miami RedHawks in November of 2015. This time it was Riese Gabert to Collin Adams to Pinto scores.

“I think we caused our own grief tonight, Berry said. “Whenever you take offensive zone penalties 200 feet away from your net, those are the concerning ones. The stick penalties are a little bit concerning.”