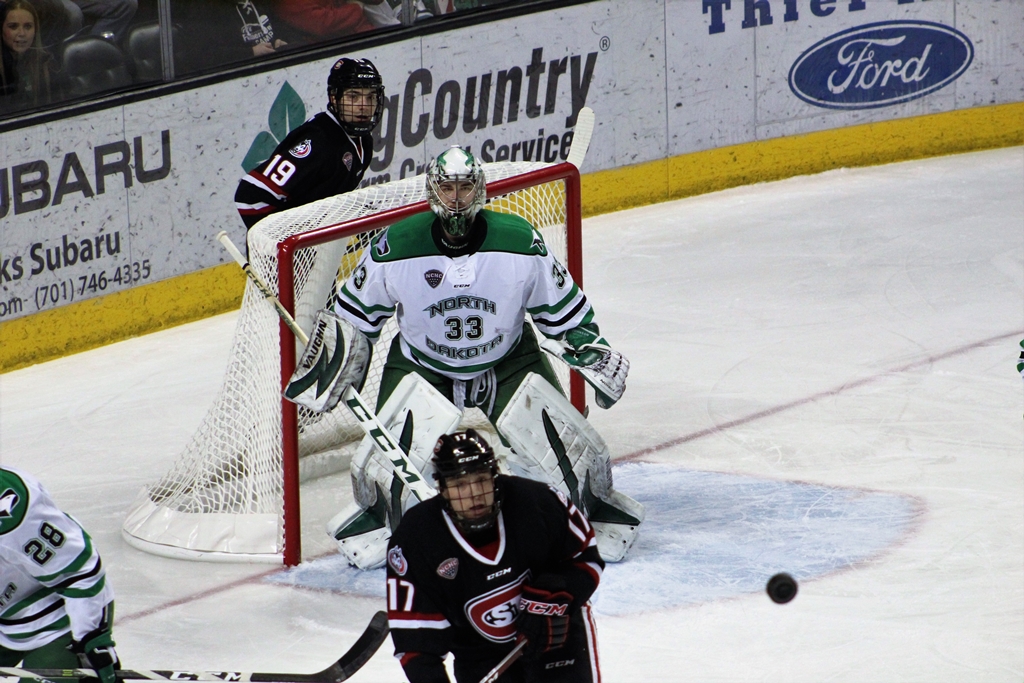 Grand Forks, ND – Entering Saturday’s season finale, there was no tomorrow for the University of North Dakota hockey team. They needed points to secure home ice for the National Collegiate Hockey Conference playoffs.

The task at hand wasn’t easy. Standing in the way was the Penrose Cup Champions, the St. Cloud State Huskies. Entering the final regular season game,  the Fighting Hawks also needed help if they wanted to continue their 15-year streak of hosting a home playoff series. With their back against the wall, they found a way to secure enough points to secure a home playoff berth. The first step is complete, but it didn’t come easy.

There are a lot of positives to take from the weekend. There’s also a fine line between winning and losing. Make no mistake about it, this past weekend, UND played it’s best hockey of the season. I think it’s fair to say that it was their most complete two-game series of the season. They still were only able to secure two-of-six points. Moving forward, the Fighting Hawks should be able to gain some momentum moving into the NCHC playoffs.

Head coach Brad Berry was pleased that his team won’t have to travel during the first round of the playoffs.

“It’s huge, Berry said. “Every time we talk with (our players) at the beginning of the season or during the introductory meeting we have a list of goals in front of us. The very first one is to get home ice. It took us till the last regular season game to get home ice and we did.

“Now everyone starts at zero. It’s a clean slate. We’re not off the hook yet. We have to win games to get into the national tourney, and that’s the next box. Getting into the Frozen Faceoff is another box. We have a list in front of us. Got the first one, now we’ve got to keep moving.”

The Fighting Hawks also cut it short, they didn’t secure home ice until the last game of the regular season. It was touch and go for a while. UND needed to tie or win in overtime to secure home ice.

“Never a doubt,” junior defenseman Christian Wolanin said. We probably took the hardest route possible. We set a couple of goals for our team and home ice was one of them.”

On Saturday night, a band of brothers gutted out a 3-2 three-on-three win to secure home ice for the NCHC playoffs.

“Everything about North Dakota is that you do it for the guys that were here before you,” Wolanin said. “You do it for the guys that have been through it all. Those four seniors have won a Penrose, have won a national championship and all of them have letters besides Cammer (Cam Johnson). They deserve all of the credit they’re getting and they’re deserve a win and home ice. They’re a great group of guys.”