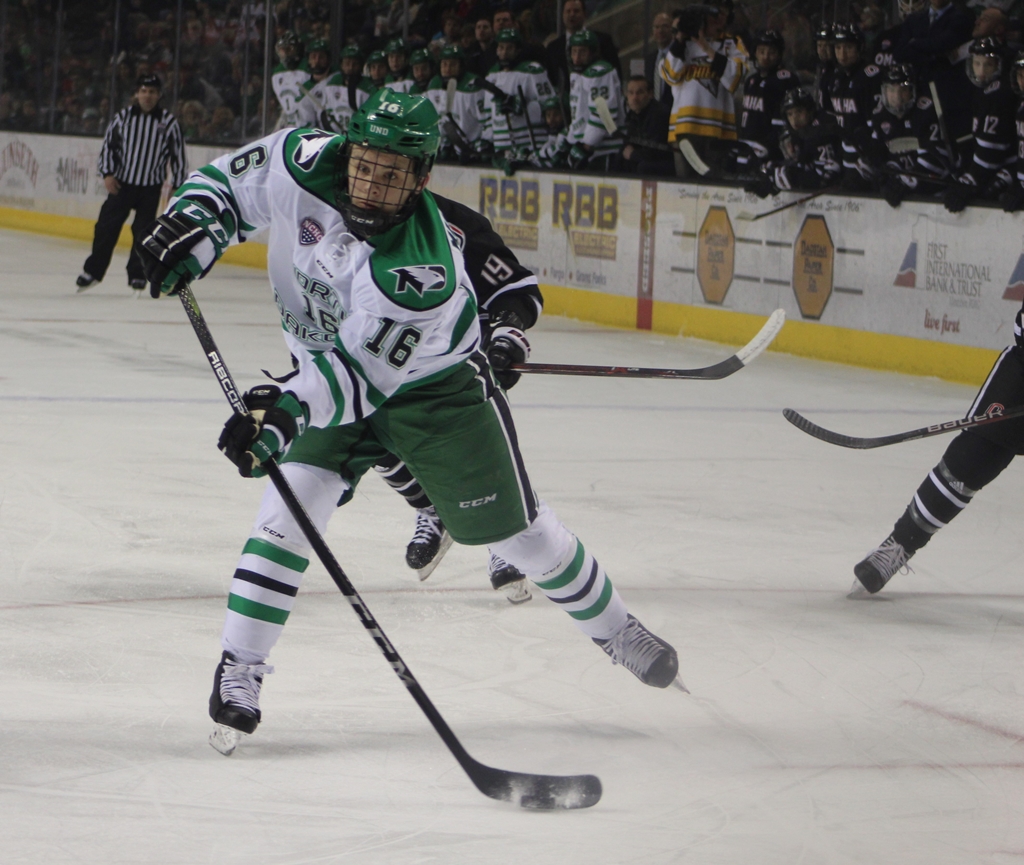 On Friday, the University of North Dakota hockey team was in Omaha, Nebraska, to faceoff against the Omaha Mavericks in a pivotal two-game conference matchup. Recently, this series has grown into an intense rivalry. The two teams despise each other. The good news, the two teams play each other five more times this season. With that said, the games have been entertaining, emotional battles. Friday’s game was no different 1,429 fans left Baxter arena having watched a hard-fought NCHC hockey game.

“We knew coming in it was going to be a battle,” forward Shane Pinto said. “They play hard. There’s kind of a little rivalry brewing, and we got them five more times so it’s not going to get any prettier. We’ve just got to stick to our game and we’ve just got to stay disciplined.”

Disciplined. On Friday night, UND’s play was anything but disciplined. As a team, UND took two major penalties and the two teams combined for 56 minutes in penalties. Add to that, there were no less than five video reviews. That can slow down a team’s momentum.

“That’s why it’s incumbent upon the players in the staff to stay focused,” head coach Brad Berry said. “When you have penalties some guys don’t get on the ice. You’ve got to do a good job and be mentally attached to the game and know that your next shift, you’ve got to be ready to bring it. Again it’s tough, but that’s the way it is. We’ll have to make sure that we stay focused here when those things do happen.”

UND doesn’t want to have to rely on their penalty kill every game and will want to limit the number of penalties they take.

“We knew it was going to be a battle, obviously, we play similar games,” senior forward Grant Mismash said. “Tomorrow, we want to limit the penalties and the stuff after the whistle, but you know it happens.”

“We’ll address that tomorrow in our morning meeting,” Berry said.

Why is this such an intense series? Really? Is this series much different that playing Denver or Duluth? Last season, the series really heated up on the ice.

“I don’t know if it’s any different from playing Duluth and Denver,” Berry said. “That’s the beauty of our league. It’s a very competitive, intense league with good players. That’s what you’re going to get.”

At the 2:06 mark of the second period, UND trailed UNO 2-1. That was all for the Mavericks. The Fighting Hawks took off, and scored five unanswered goals to blow out Omaha 6-2. When it was all said and done, Pinto had another multi-point game. That makes three in a row (4g-2a—6pts). After Friday’s game, Pinto leads the NCHC in points with nine goals and 21 points. Finally, Pinto has eight multi-point games this season.

Caulfield is on a hot streak. Over the past two games, the Grand Forks native has scored two goals and three points. Last night, he had his first multi-point game of the season, a goal and an assist. Caulfield stole the puck from former teammate Jonny Tychonick and deposited the puck behind Maverick goalie Isaiah Saville.

“I don’t think there’s been a whole lot of times that our top players have been passengers on our team,” Berry said. “They’ve led the charge, and we need to continue that. That’s why they’re leaders on the team. When you look at (Jordan) Kawaguchi, Mishmash, and (Collin) Adams and those type of players that came back their senior year. Yeah, they feel they feel that they have to do it, and lead by example and they’ve been doing that.”

“There’s a rivalry there,” Omaha head coach Mike Gabinet said.” You can tell it’s apparent, but you’ve got to have emotional control out there and pick your spots when you get involved. There’s a lot of emotions out there it was a spirted game.”

“I think it was a hard-fought win,” Berry said. “We found a way to grind it down and get the win.