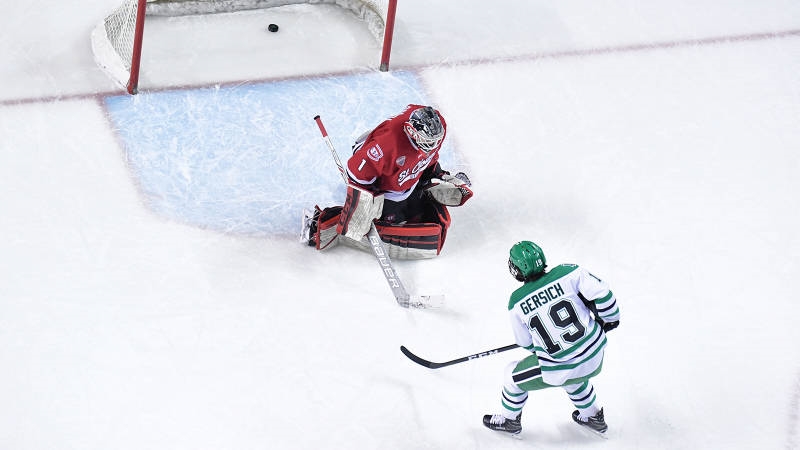 UND Beats SCSU in Game One

Grand Forks, ND – College hockey’s March Madness is officially here. For some teams, it’s now or never. Based on their current situation, there’s no tomorrow for the University of North Dakota if they don’t win two games and advance to the Frozen Faceoff next weekend their season will be over. The same applies to St. Cloud State. Win or gome home.

The table was set for a pretty good college hockey matchup.

All season long, UND fans have been waiting for their favorite team to catch fire and go on a big run. Which each big win, they’ve taken a step backward the next evening. After sweeping the Miami RedHawks last weekend in Oxford, OH, things were starting to look up for the Fighting Hawks. The Hawks entered their NCHC playoff series against the Huskies with some momentum.

Head coach Brad Berry talked about the importance of getting the first goal and starting fast and tonight, the Hawks took the lead and never relinquished it.

At the 09:43 mark of the second period, with the Fighting Hawks on a 5-on-3 penalty kill, the Huskies would cut the lead to 2-1 with a power play goal from former Grand Forks Red River alumnus Jacob Benson.

After missing last weekend’s series with a wrist injury, sophomore All-American forward Brock Boeser returned to the lineup. At the 16:27 mark of the second period, Boeser hammered home a one-timer from Tucker Poolman to give the Hawks a 3-1 lead. Going into Friday’s game it was touch and go for Boeser.

“My wrist felt good in the morning skate and coach brought me in and gave me the green light,” Boeser said. “Last week, maybe it was hurting a little bit there. I think the week off was really good, but tonight, I just wanted to come in and bring energy and help the team have success and build off of last weekend.”

Huskies defenseman Jimmy Schuldt would make the hometown fans squirm when scored his eighth goal of the season on the power play. After that, the Hawks would bear down and ice the game with two more goals from Austin Poganski and Joel Janatuinen.

Tonight, the Fighting Hawks took their first step in advancing to the Frozen Faceoff in Minneapolis next weekend. With the 5-2 win, UND has now won three games in a row for the first time in two months. Win aside, no one is celebrating the win, there’s a lot of work to be done.

“The biggest thing this time of year is having four lines, six defensemen, and a goaltender all contributing,” coach Berry said. “Not just one set, or one line or one d-pair – or the goaltender. It has to be everybody. I thought, for the most part, tonight the guys did a pretty good job. Tomorrow is going to be another challenge. We need to up our level tomorrow. Tomorrow is going to be a harder game, and we have to make sure that our level goes up.”

With the win, UND remained in 11th of the Pairwise Rankings. The Fighting Hawks will try to close out the Huskies tomorrow at 7:07 PM